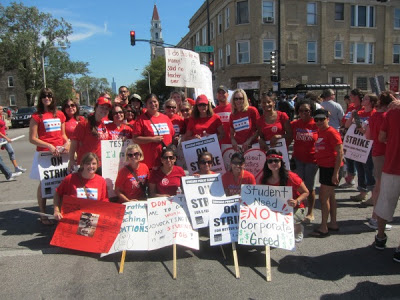 If the city of Chicago wins this strike it will very likely give the green light to big cities such as Los Angeles and New York to go after teachers’ unions there.

Fred Klonsky, 64, retired in June 2012 after 30 years of working as an art teacher in grades k-5 in the public school system in Illinois.

He doesn’t go into the classroom to teach kids anymore, but he hasn’t retired from political activism and from protesting 101. A long-time president of his local union, he’s as politically active now as he’s ever been. With Chicago teachers on strike, he’s out in the streets with tens of thousands of other teachers and like them wears a red shirt. He also writes about the strike almost daily on his blog, FredKlonsky.com.

If the name Fred Klonsky rings a bell it might be because he’s a former SDS member and because his older brother Michael was national secretary of SDS in the late 1960s. Twenty years old in 1968, Fred participated in the civil rights and anti-war movements of the Vietnam War era. He attended Los Angeles City College and the University of Illinois at Chicago where he graduated in 1984. “Solidarity Forever,” the old union slogan, still lights a fire in his belly. 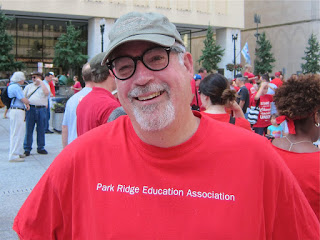 Fred Klonsky: Everything! The city is attacking the unions and collective bargaining rights. The Democratic Party administration wants to make it difficult if not impossible for teachers to go on strike. They want to break the back of the teachers’ union and they want school principals to have total control of the hiring and the firing of teachers.

Chicago is famous for people getting jobs based on who they know not what they know or what they can do. They want to apply the same principle to education.

It seems to me to be an intense power struggle.

If the city of Chicago wins it will very likely give the green light to cities such as Los Angeles and New York to go after teachers’ unions.

Are you an observer or a participant in this strike?

I’m some of both. I’ve been on picket lines. Two days ago I was on the line from 6:30 a.m. to noon. I’m also writing about the strike.

I’ve been at a lot of demonstrations over the years, but there is nothing like what’s happening here. It’s beautiful. The striking teachers are wearing red shirts and at the rallies there’s a sea of red. The picket lines are spirited and lively. I’ve seen former students out there, too, and that’s gratifying.

What’s the ethnic make up of the striking teachers?

In 1987, which is when the last teachers’ strike took place in Chicago, over 50% of the teachers were African American. Today it’s about 19%. If the mayor wins and we lose I think that the number of African-American teachers will plummet even more. Moreover, the goal will be to serve wealthier kids not the most needy kids.

Does the city want to gentrify the schools?

Chicago is following the European model in which the wealthy live in the center of the city and the poor and the working classes in suburban enclaves.

What is the big demographic picture in Chicago?

Once upon a time there was white flight. That pattern has reversed since the 1970s. The 2010 census shows that the African-American population has declined sharply. Young white professionals have settled in the center of the city, but they leave when their kids are of school age.

So the city wants the public school system in Chicago to reflect demographic changes and bring the wealthier kids back into the school district?

Yes, the city wants to do that and to privatize schools and educational services which are a multi-billion-dollar a year business.

Why are teachers demonized and made the scapegoats in our society? Are they in the way of the corporations? 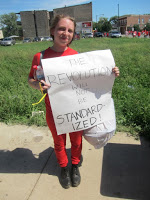 To a large extent the union movement in the private sector has been destroyed. The powers-that-be are aiming to destroy unions in the public sector. The National Education Association (NEA) with three- and-one-half-million members is the largest union in the United States. The American Federation of Teachers (AFT) has one million members. That’s a combined total of four million organized workers. They’re the last union men (and women) standing.

In this strike the city is depicting teachers as greedy folks who are against change and who want to keep the status quo. Nothing could be further from the truth.

They are like urban schools everywhere. There are 360,000 students in the Chicago public school system that now mainly serves the poorest of the kids from the poorest of families. Eighty-five percent of the students qualify for free lunches. That means they’re very poor. Those who can afford to have taken their kids out of the public schools and put them in charter or private schools. The public schools have very few supplies and very few books. They do not have adequate resources.

The union leadership here is taking a real stand. There is real backbone among union members. Moreover, the unions for the police and for firemen are supporting the strike. There’s real solidarity here.

What grade would you give Mayor Rahm Emanuel so far in the strike?

A failing grade and not only because of what he’s done during the strike. He has said that no matter what, 25% of students will fail. That’s unacceptable to teachers and their union. Emanuel has only been in office for a year, but violence in the city has skyrocketed. There have been more murders here in the last year than in Afghanistan. He’s turned my city into crap. Harold Washington, who was the mayor in the 1980s, was far better. He actually paid attention to the needs of the most needy. Rahm Emanuel doesn’t.

Will the strike affect the presidential election?

I can’t imagine that Obama is happy about the strike. So far he has had no comment. Of course, Mitt Romney and Paul Ryan have offered their support to Mayor Emanuel. We have a Democratic mayor putting Republican educational policies into practice. It’s a sad day for the city of Chicago.