“I don’t really like labels, but if I had to label Jack I’d say he was bisexual. He was mostly attracted to women, though he had some sexual relationships with men, including Allen Ginsberg, and, of course, he had very close friendships with men.” — Joyce Johnson

Do lovers make the best biographers? Yes and no. Intimacies can provide insights but they can also warp perceptions and distort the story itself. The question isn’t easy to answer when it comes to Joyce Johnson and Jack Kerouac, the subject of her new biography, The Voice Is All (Viking).

Joyce met Jack on a blind date in New York in 1957. Allen Ginsberg, who was in ecstasy about the publication of his epic poem, Howl, played matchmaker. She was Jewish, 22, and had been a teenage Beatnik even before the term Beatnik was coined by San Francisco Chronicle columnist Herb Caen. He was Catholic, 35, and known as the “King of the Beats.”

“We were both writers,” Johnson said recently from her apartment in Manhattan where she has lived most of her life and where she’s gearing up to go on the road to talk about her lover, Kerouac, once again. About the marriage that might have been she added, “I thought that Jack and I could have been two comrades together, supporting one another’s work.”

It was not meant to be, if only because of Kerouac’s furtive ways and unwillingness to settle down. Then, too, there was his impossible, demanding mother. “Jack could not have brought a Jewish wife home to her,” Johnson explained. “I met her when she and Jack were living in Northport on Long Island. I asked him what I could bring her and he said, ‘rye bread from the Lower East Side.’ When I handed the loaf to her she said, ‘Jewish bread!’ She had a thing about Jews.” Indeed she did, as almost all previous Kerouac biographers have noted.

Allen Ginsberg wasn’t welcome in Gabrielle Kerouac’s house, either. Of course, Jack could fulminate against the Jews nearly as well as his mother — though he had Jewish friends and Jewish lovers. He thought of Jews as exotic and described Joyce as a “Jewess.”

“At the time, I didn’t realize that it was hip to have a Jewish girlfriend,” she said. “Who would have thought that Jews were exotic?”

Joyce Johnson — born Joyce Glassman in Brooklyn, New York in 1935 — says that she never expected to write a book about her Catholic boyfriend, Jack Kerouac. As a young woman, she wanted to become a novelist and turn out fiction in the vein of her literary idol Henry James.

The fact that she never graduated from Barnard College has never really troubled her, nor did it stop her from writing books and working for New York publishing houses. For years she was the executive editor at Dial Press and published books by zany characters such as Abbie Hoffman, the author of Revolution for the Hell of It. 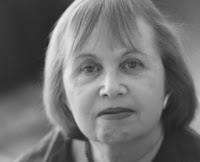 If there was one thing she learned from Kerouac’s On the Road, it was that there was a market for countercultural books. Her own first novel, Come and Join the Dance, appeared in 1962 under her maiden name. Bad Connections followed in 1978. Neither is still in print, though Johnson isn’t bitter about that fact, nor is she bitter about her two marriages. The first was to the artist James Johnson who died in a motorcycle accident. The second was to the painter Peter Pinchbeck and ended in divorce. Their son Daniel Pinchbeck also writes.

For decades, Johnson’s memories of Kerouac, Ginsberg, and their friends wouldn’t leave her alone, though she insists that she was never “haunted” or “obsessed” by them. In the 1980s, she poured her memories into a memoir entitled Minor Characters, a coming of age story set against the backdrop of the Beat Generation. Along with Brenda Knight’s Women of the Beat Generation, it was one of the first books to make readers aware of the fact that the Beat Generation wasn’t just male territory. There were women around, too, like Carolyn Cassady, and Joan Vollmer Adams as well as Johnson’s best friend Elise Cowen, who committed suicide by jumping from a window.

Johnson followed her Beat memoir with Door Wide Open: A Beat Love Affair in Letters in which she published her correspondence with Kerouac. Now, she’s written a splendid book entitled The Voice Is All: The Lonely Victory of Jack Kerouac. The former lover and friend is now the biographer; the intimacy that she once shared provides her with insights, and, in her role as scholar she has the detachment that’s needed to make critical observations about Kerouac’s life and work.

“I wanted to set the record straight,” she said. “That was my motivation. There have been so many misleading biographies about Jack including those that make the case that he was a homosexual. I don’t really like labels, but if I had to label Jack I’d say he was bisexual. He was mostly attracted to women, though he had some sexual relationships with men, including Allen Ginsberg, and, of course, he had very close friendships with men.”

Unlike previous biographers of Kerouac, Johnson didn’t go on the road, retrace his cross continental and global journeys, or interview his friends and associates. She doesn’t much trust oral history and oral historians. Rather than pile into the back seat of a car and take off for San Francisco, she took the subway from Manhattan’s Upper West Side to 42nd Street and plunked herself down in the Berg Collection at the New York Public Library, where Kerouac’s archives are housed.

For years, scholars were denied access. Soon after the manuscripts were made available and restrictions removed, Johnson read all of Kerouac’s papers, took notes, and started to rethink her notions. A new and different picture of Kerouac emerged: he wasn’t the King of the Beats, but a Lonesome Traveler and a lonesome writer “holed up in a room” most of the time. Occasionally, he’d come out to play with the friends he’d made in the 1940s in New York.

To write her biography, Johnson salvaged memories and impressions of Kerouac. “I was an eyewitness,” she said. “I think that perspective is valuable. I saw him as a shy, reclusive person who drank much of the time. Granted, most writers work alone. Jack was more alone than most. He was intensely reclusive, though he usually secluded himself with his mother. Allen Ginsberg always assumed that he was self-confidently American — the all-American male. In fact, Jack felt like a misfit who didn’t belong anywhere and certainly not in the world of writers. ‘I don’t even look like a writer,’ he would tell me. ‘I look like a lumberjack.’ His sense of uneasiness never left him.”

In conversation and in her biography, Johnson paints an indelible portrait of Kerouac as a young artist who couldn’t leave his mother for extended periods of time. “When he tried to spend 63 days on Desolation Peak in the State of Washington in the fall of 1956 he practically had a nervous breakdown,” she said. “He couldn’t take the solitude. The same thing happened when he stayed in Lawrence Ferlinghetti’s cabin in Big Sur on the California coast.” 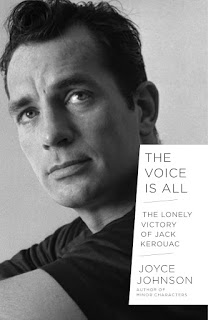 Johnson also paints a portrait of an artist who struggled to find his own personal voice. For years, she points out, he mostly wrote in the third person. It took a lot of practice and enormous discipline for him to feel self-confident enough to write in the first person. “In the literary world in New York in the 1950s there was a real prejudice about writing in the first person,” Johnson says. “I heard it expressed again and again.”

Kerouac had to overcome the rule against using the “I” pronoun, and to feel confident writing in English, which was his second language after the joual spoken by French Canadians such as his own parents.

Johnson distinctly remembers Kerouac’s speaking voice — the way he’d call her “Joycey” in an affection tone of voice. Most of all she remembers the voice he used as the narrator for the 1959 film Pull My Daisy which was directed by Robert Frank and Alfred Leslie and that features most of the member of the Beat “boy gang”: Ginsberg, Gregory Corso, Peter Orlovsky, Larry Rivers, and David Amram, plus Alice Neel. Of the leading Beat luminaries only William Burroughs and Neal Cassady — the inspiration for the Dean Moriarty character in On The Road — are missing.

If Johnson has her way, she’ll alter the ways that readers and critics have interpreted On the Road. From her point of view, it’s less about the search for the father, and more about dualities — Kerouac’s own and those of American culture at large. “Biographers often point to Kerouac’s meeting with Neal Cassady as the spark that ignited On The Road,” she says. “But he had the idea for the novel before he met Cassady. He wanted to write a book about a young man recovering from an illness who travels to rejuvenate himself. That theme is there in the finished work.”

The Kerouac myth influenced Johnson perhaps as much as anyone else, though she lived with him and watched him at work. “Like almost everyone else, I believed the story he told that he wrote On The Road in three weeks,” she said. “Only later and after reading his manuscripts at the Berg did I see that he kept rewriting the novel. For a long time he also lost interest in On The Road. He was even working on a novel in which there are two half-brothers living on a farm in California; it was a kind of homage to John Steinbeck’s East of Eden.”

Kerouac’s dualities punctuate nearly all of Johnson’s comments about him. Indeed, she sees his resilience, along with what she calls his “terrible, terrible, terrible fragility.” In her biography, she explores both sides, though it’s his “victory” as a writer that she emphasizes.

“I think that he discovered a new way of working — at the peak of inspiration,” she said. “He blasted it out. He had these brief ecstatic moments that took a lot out of him. They were followed by periods of boredom and depression.”

Johnson’s biography is perhaps kinder and gentler to Kerouac than her memoir, or than she was in person when they broke up and went their separate ways. “You’re nothing but a big bag of wind,” she told him. More than half-a-century later, she’s not as angry or hurt as she once was. If Kerouac had flaws, they were in large part the flaws of the age in which he lived, she suggested, when we spoke. “It was a very misogynist time,” she told me. “Jack imbibed that misogyny.”

Johnson compares Kerouac to Neal Cassady and says that they both “created havoc” in the lives of friends, lovers, and family members. Kerouac’s brand of havoc wasn’t overtly “hostile,” she believes, but rather born of “forgetfulness.” In her 1983 memoir, Minor Characters, she depicts Kerouac as a kind of masochist with a “desolate need to deprive himself of sexual love.”

Does Johnson think of herself as a Beat Generation writer?

“Yes and no,” she said. “I wasn’t attracted to the drugs and the alcohol. They had no appeal for me. I did not want to lose consciousness. What I admired about the Beats then and still admire is their openness to experience and adventure. I like to think that I’ve followed in their footsteps. In my 70s, I did what I had never done before — write a biography. I’m not at all sorry that I tried something new and different.”