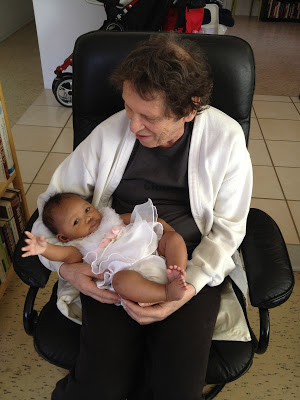 Paul Krassner at his 80th birthday party.
The counterculture was
a spiritual revolution:
A Rag Blog interview with Paul Krassner

As the editor of The Realist, Krassner taught me not to take myself too seriously and not to gaze with absolute reverence at the icons of the Sixties.

Alive and well and still kicking, with a satirical brand of biting humor that’s right on-target and as deadly as ever, Paul Krassner is an American national treasure.

In April 2012, he celebrated his 80th birthday with his daughter and grandchild. During the first week of June, he published, in a new, updated edition, his 1999 marijuana compendium, Pot Stories for the Soul. (Soft Skull Press; $17.95).

Right about here, and now, the ethics of the profession demand that I make a full disclosure. Krassner and I belong to the vast American underground that began before 1776 and that like him is still going strong. I’m also in his new book, along with Kate Coleman, Lynn Phillips, Robert Anton Wilson, and the usual suspects: Tommy Chong, Hunter S. Thompson, Wavy Gravy, Allen Ginsberg, and more.

The provocative editor of The Realist, as well as one of the zaniest of the zany Yippies, and a founding brother of the underground press, Krassner surely needs no introduction, at least not to survivors of the Sixties, readers of The Rag Blog (to which he is a semi-regular contributor), and to lovers of political satire from any generation. 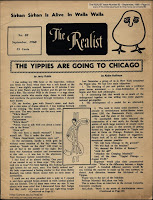 Still, it might be helpful to remind the old, the young, the in-between, and even those in the know, that Krassner belonged to Ken Kesey’s band of outlaws, the Merry Pranksters, that he testified at the Chicago Conspiracy Trial, and that he has written or edited 11 books, several of them classics of American humor: Confessions of a Raving, Unconfined Nut; The Winner of the Slow Bicycle Race; and the superlative, Who’s to Say What’s Obscene?: Politics, Culture, and Comedy in America Today.

Unafraid to poke fun at himself and unafraid to move at the pace of a turtle, not a rabbit, he has outlived many of his hilarious and deadly serious co-conspirators including Jerry, Abbie, Phil, and Stew (Rubin, Hoffman, Ochs, and Albert). As the editor of The Realist, Krassner taught me not to take myself too seriously and not to gaze with absolute reverence at the icons of the Sixties.

In 1970, when I submitted an article to The Realist about my experiences in Algeria with Eldridge Cleaver and Timothy Leary, he promptly changed my title and published it as “Eldridge & Tim & Kathleen & Rosemary.”

The previous year, moviegoers had flocked to theaters to see Paul Mazursky’s romantic comedy, Bob & Carol & Ted & Alice, with Natalie Wood, Elliot Gould, Robert Culp, and Dyan Cannon. Ads for the movie depicted the two couples in the same bed together. With a sharp eye on the sense and nonsense of pop culture and an unerring sense of satire, Krassner ran, on the cover of The Realist, a cartoon of Eldridge, Tim, Kathleen, and Rosemary in bed together.

I don’t know if they laughed, but I did, and thanks to Paul I have been laughing ever since, as much as I can, even when it hurts.

Jonah Raskin: The new, updated version of your old book is entitled Pot Stories for the Soul. Why the “the soul” and not “the head”?

Why do you think that President Obama — a pot smoker as a teenager — is so opposed to pot now?

Fear of losing the election. Maybe Big Pharma threatened not to fund his campaign. But it’s still a mystery. After all, his position on same-sex marriages “evolved” because of the polls. The irony is that if he had been busted as a teenager, he would never have been elected president.

In the title of your book, why do you call it pot and not weed, marijuana, cannabis, or grass?

It just felt right: the rhythm and the informality.

Do you really think that pot has medicinal values, or is that concept just a stalking horse for legalization for recreational purposes?

I absolutely believe it has medicinal values, not only because of research, but also from my own experience. Even if it could only relieve stress, the cause of so much disease is stress. Medical vs. recreational is a false distinction — it’s the anti-pleasure movement in action. Nobody ever says you should drink red wine and eat dark chocolate for their medical properties, but not for enjoyment.

Is there any truth to the rumor that The Realist was published on hemp paper?

It’s a great rumor, though false, but if I had to do it all over again, it would be true.

Do you think that there’s a Yippie gene and that some are born with it and some not?

I think that every child is born with innocent irreverence, but it’s canceled by the osmosis of cultural repression. It’s retrieved by those of us fortunate enough to break through society’s brainwashing.

Few if any plants take more abuse than marijuana. Why is that? What’s so funny about marijuana?

What’s funny is that Prozac is expensive and a side effect is suicidal tendencies, whereas marijuana can be grown in your window box for free, and the “worst” side effect is the munchies.

In 1968, the Yippies called for the legalization of marijuana. It’s almost 45 years later. Why didn’t legalization happen?

The influence of anti-pot propaganda, and the fact that Richard Nixon ignored the advice of the commission that he authorized.

If pot makes you forget what would you most like to forget after taking a hit?

I’d like to forget, but can’t, that there are so many prisoners serving time, as Lenny Bruce said, “for smoking flowers.” The abuse of power without compassion extends to the injustice and inhumanity of American drones killing children in Pakistan.

I suppose at your age you don’t think pot will be legalized in your lifetime?

It’s not impossible. All the president has to do is have it removed from Schedule One of dangerous drugs. Maybe I’m just optimistic from smoking too much pot. High Times once published a questionnaire, and one of the questions was, “Is it possible to smoke too much pot?” A reader responded, “I don’t understand the question.”

Is there pot in Heaven, in Hell? Who’s more likely to smoke it: god, the goddess, the devil?

There’s pot in Heaven on Earth, not in Hell on Earth. Only the Goddess of Reefer Madness knows why it’s called Devil Weed.

Who are the leading pot smokers in your Hall of Fame?

And what enforcement figures are the main figures in your Hall of Shame?

In a group, how can you tell the pot smokers, growers, and smugglers on trial from the lawyers who defend them?

The defendants are the ones who supply their lawyers.

Are you stoned now?

Can you tell me where I can buy a righteous joint or two?

Most likely from your students.

You were born before TV, before the fax, email, the cellphone, Facebook, Google, and Twitter. Would you like to return to the golden age of radio?

I prefer to live in the present; it’s a matter of choice. I decided to quit Facebook after I reached 5,000 “friends.” It just became too much of a distraction.

At its core, the counterculture was a spiritual revolution, replacing religions of control with disciplines of liberation.

What would Lenny Bruce say about pot if he were alive today?

“Hey, this shit is fucking powerful.”

[Jonah Raskin, a regular contributor to The Rag Blog, is the author of Marijuanaland: Dispatches from an American War, For the Hell of It: The Life and Times of Abbie Hoffman, and American Scream: Allen Ginsberg’s “Howl” and the Making of the Beat Generation. Read more articles by Jonah Raskin on The Rag Blog.]