Involuntary Contributions to Friends of George

In Juan Cole’s words, “A lot of money was wasted on phantom reconstruction projects in Iraq left incomplete because of poor contractor performance. In other words, US tax payers made an involuntary contribution to Friends of George, which would be a good way of summing up the Iraq occupation in general.” 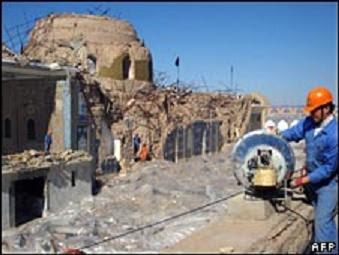 Iraq reconstruction has cost US taxpayers more than $100bn so far

An audit of US-funded reconstruction projects for Iraq has found millions of dollars have been wasted because many schemes have never been completed.

The Special Inspector General for Iraq Reconstruction blamed delays, costs, poor performance and violence for failure to finish some 855 projects.

Many other projects had been falsely described as complete, found the audit of 47,321 reconstruction projects.
Iraq reconstruction has cost US taxpayers more than $100bn so far.

USAID, the body responsible for overseeing Iraqi reconstruction, has responded that the database used for the review was incomplete.

The audit by Senator Stuart Bowen found US officials had terminated at least 855 projects before completion.

Of this number, 112 were ended because of the contractors’ poor performance.

“Contractors are killed, projects are blown up just before being completed, or the contractor just stops doing the work.”

Last year, congressional investigators said as much as $10bn (£5bn) charged by US contractors for Iraq reconstruction had been questionable.

This entry was posted in RagBlog and tagged Bush, Corruption, Iraq. Bookmark the permalink.