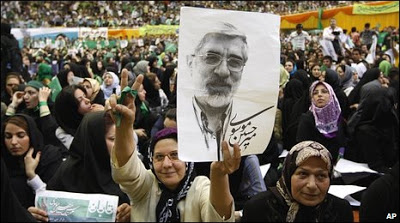 The Persian Service of Voice of America (VOA) is said to have sided with the anti-Ahmadinejad candidate Mir Hossein Mousavi. Photo by AP from BBC News.
Who’s Diddling Democracy in Iran?

Does my reading of the tea leaves prove conclusively that the Obama administration was hell-bent on regime change? Not conclusively, but all the evidence points in that direction…

Watching the protesters in Tehran, many Americans feel a strong sense of empathy, exhilaration and hope. I strongly share those feelings, especially since I know firsthand the danger the protesters face from government thugs on motorcycles, provocateurs and the secret police. But none of this should blind us to the likelihood that our own government is dangerously meddling in Iran’s internal affairs and playing with the lives of those protesters.

Back in 2007, ABC News reported that President George W. Bush had signed a secret “Presidential finding” authorizing the CIA to mount covert “black” operations to destabilize the Iranian government. According to current and former intelligence officials, these operations included “a coordinated campaign of propaganda broadcasts, placement of negative newspaper articles, and the manipulation of Iran’s currency and international banking transactions.”

In the language of spookery, this was an updated version of the destabilization campaign that the CIA had earlier used to overthrow the progressive government of Salvador Allende in Chile.

ABC News also reported that American and Pakistani intelligence were backing a separatist militia of militant Sunni tribesmen from the non-Persian Baluchi region of Iran. The group — Jundallah (Soldiers of God) — conducted deadly raids into Iran from bases in Pakistan’s Baluchistan Province. Funding for this was reportedly funneled through Iranian exiles with connections in Europe and the Gulf States.

U.S. officials denied any “direct funding” of Jundallah, but admitted regular contact since 2005 with Jundallah’s youthful leader Abd el Malik Regi, who was widely reputed to be involved in heroin trafficking from Afghanistan.

“I think everybody in the region knows that there is a proxy war already afoot with the United States supporting anti-Iranian elements in the region as well as opposition groups within Iran,” said Vali Nasr, adjunct senior fellow for Mideast studies at the Council on Foreign Relations.

“And this covert action is now being escalated by the new US directive, and that can very quickly lead to Iranian retaliation and a cycle of escalation can follow.”

The New Yorker’s Seymour Hersh subsequently confirmed the story, reporting that the Presidential finding focused on “on undermining Iran’s nuclear ambitions and trying to undermine the government through regime change.”

He also reported that the Democratic-controlled Congress had approved up to $400 million to fund the destabilization campaign. “The covert activities involve support of the minority Ahwazi Arab and Baluchi groups and other dissident organizations,” said Hersh.

“The irony is that we’re once again working with Sunni fundamentalists, just as we did in Afghanistan in the nineteen-eighties,” he wrote. “Ramzi Yousef, who was convicted for his role in the 1993 bombing of the World Trade Center, and Khalid Sheikh Mohammed, who is considered one of the leading planners of the September 11th attacks, are Baluchi Sunni fundamentalists.”

Flash forward to the new presidency of Barack Obama. Did he and his CIA chief Leon Panetta cancel the destabilization program? Not that I can find. The tea leaves are murky, but they suggest that, so far at least, Team Obama remains wedded to the Bush-Cheney-Abrams destabilization of Iran.

The issue came to a head in the last few weeks. Obama wanted to bring the Iranian regime to the table, and the administration knew through scholars like Selig Harrison that the ayatollahs wanted a signal that the new president would stop supporting terrorists within Iran. At the end of May, the chance to send that signal came when Jundallah claimed credit for a suicide bombing that killed 25 people and injured as many as 125 others at a prominent Shiite mosque in the southeastern city of Zahedan.

Both the White House and State Department immediately denounced the bombing and denied any involvement in what Obama’s spokesman Robert Gibbs explicitly called “recent terrorist attacks inside Iran.”

Several news articles then reported that the administration was considering placing Jundallah on the State’s Department’s list of terrorist organizations, which would have signaled a major shift in policy. But, suddenly, the administration backed away from making the terrorist designation or from otherwise indicating that it would stop the destabilization campaign.

To the contrary, in the build-up to the Iranian election, Washington sharpened its propaganda efforts. According to Ken Timmerman, the executive director of the right-wing Foundation for Democracy in Iran, the Persian Service of Voice of America (VOA) clearly sided with the anti-Ahmadinejad candidate Mir Hossein Mousavi against those dissident groups who wanted to boycott the election entirely, the position Timmerman favored.

Timmerman claims that VOA refused to give the boycotters airtime while giving extensive coverage to a secret fatwa that the Mousavi campaign claim to have discovered, a fatwa that encouraged bureaucrats at the Interior Ministry to do “whatever it takes” to get Ahmadinejad elected.

Timmerman also saw the branding of Mousavi’s “green revolution” as evidence that the US government was using its National Endowment for Democracy to support the former prime minister.

“The National Endowment for Democracy has spent millions of dollars during the past decade promoting ‘color’ revolutions in places such as Ukraine and Serbia, training political workers in modern communications and organizational techniques,” Timmerman wrote on the right-wing newsmax.com.

“Some of that money appears to have made it into the hands of pro-Mousavi groups, who have ties to non-governmental organizations outside Iran that the National Endowment for Democracy funds.”

Please note that this comes from a very involved right-wing critic who personally knows the expatriate Iranian community. It is impossible to know how much government money went to these groups, since Congress has purposely exempted the National Endowment for Democracy from having to make public how it spends taxpayer money. Clearly, Congress should begin to ask some tough questions about funding for Mousavi’s “green revolution” before any more Iranian protesters are killed.

One other clue is worth considering. The State Department somehow knew that the social-networking site Twitter had intended to close down for maintenance earlier this week during what would have been morning in Tehran. So, as The Washington Post put it, the State Department asked Twitter to delay the scheduled maintenance “to avoid disrupting communications among tech-savvy Iranian citizens as they took to the streets to protest Friday’s re-election of President Mahmoud Ahmadinejad.”

At first glance, those of us deeply involved in the new technology thought this was great, a serious affirmation of our own importance. But, to the ayatollahs, the State Department’s intervention sent a clear signal that the Obama administration was siding with Mousavi’s protesters. Ahmadinejad’s government, militia and police had all the internal communications they needed. Only the protesters stood to benefit.

Even more compelling, the benefit went to a particular group — those among the protesters who speak English and particularly those Iranian-Americans working with the National Endowment for Democracy. According to news reports, Twitter does not accept input in Farsi.

Does my reading of the tea leaves prove conclusively that the Obama administration was hell-bent on regime change? Not conclusively, but all the evidence points in that direction, especially now that many extremely reputable scholars are suggesting that Ahmadinejad probably did win more than a majority of the votes cast.

Ahmadinejad is a very bad guy, as I have recently written elsewhere. But our opposition to him does not justify meddling in another country’s election while proclaiming “universal democratic values.”

1 Response to Iran and the USA : Who’s Diddling Democracy?