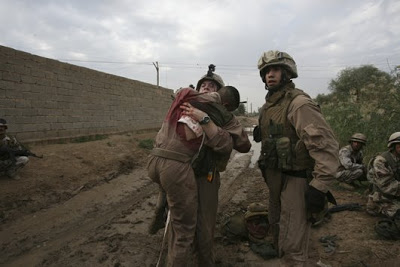 Sergeant Jesse E. Leach carries Lance Corporal Juan Valdez-Castillo after he was shot by a sniper during a patrol in Anbar Province, Iraq on October 31, 2006. (Photo: Joao Silva for The New York Times)
The Fake U.S. Victory in Iraq
By Patrick Cockburn / September 3, 2008

Political events in Iraq are seldom what they seem. The hand-over by the US military of control of Anbar province, once the heartland of the Sunni rebellion, to Iraqi forces is a case in point. The US will keep 25,000 American soldiers in Anbar, so the extent to which the Iraqi government will really take over is debatable. But the future of Anbar is a crucial pointer to the fate of Iraq. It is a vast area and one of the few parts of Iraq that is overwhelmingly Sunni.

The Iraqi government is dominated by Shia Islamic parties in alliance with Kurdish nationalists. The vital question now is whether or not this Shia-dominated government can reassure the Sunni minority that they are not going to be overrun as the US withdraws its forces. The Prime Minister, Nouri al-Maliki, is in a very confident mood. In the past four months he feels he has successfully faced down the Shia militiamen of Muqtada al-Sadr’s Mahdi Army by taking back control of Basra, Sadr City and Amarah. Then he refused to sign a new security accord with the US which President George Bush wanted to see agreed by August 31.

In the past few weeks he has been confronting his Kurdish allies over the future of the oil city of Kirkuk and the town of Khanaqin.

Mr Maliki may be overplaying his hand but there is no doubt that the Iraqi state is becoming more powerful in Iraq and the Mahdi Army, the Americans and the Kurds less so. The Americans in particular feel that he exaggerates the extent to which his success against the Mahdi Army was because of the new strength of the Iraqi security forces. 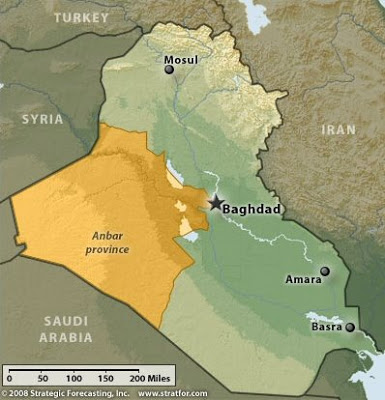 These troops were doing badly until they received American support. Nevertheless, Mr Maliki’s position is strong. He seems to have realized that he may need the US, but the US also cannot do without him and is in no position to replace him as it did with his predecessor, Ibrahim al-Jaafari.

Much of what the White House is now doing is done to help the Republicans in the presidential election. The aim is to give the impression that Iraq has finally come right for the US and victory is finally in its grasp. The surge is promoted as the strategy by which the tide was turned and it is true that the Sunni uprising against the US occupation has largely ended.

But it has done so for reasons that have little to do with the surge or American actions of any kind. Crucial to the success of the government against the Mahdi Army has been the support of Iran. It is they who arranged for the Shia militiamen to go home.

It takes real cheek for Mr Bush to claim yesterday that “Anbar is no longer lost to al-Qa’ida” since during the last presidential election in 2004, he was claiming that the media was exaggerating the success of the insurgents.

Patrick Cockburn is the Ihe author of “Muqtada: Muqtada Al-Sadr, the Shia Revival, and the Struggle for Iraq.”

This entry was posted in RagBlog and tagged Iraq, Iraq Occupation, Military. Bookmark the permalink.