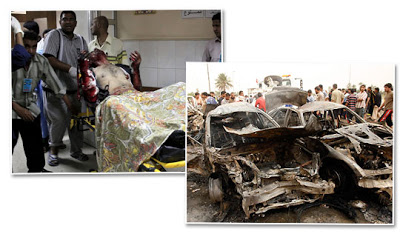 John Tirman questions the GOP’s victory narrative about Iraq. It is a measure of the Orwellian state of the US media and politics that he should have to bother. I mean, the place is a burned out hulk where hundreds die every month in political violence, where armed militias are ubiquitous, where nearly 5 million people remain displaced from their homes, where you have unemployment rates of 50% in some major cities, and where pro-Iranian Shiite fundamentalists face off against Sunni Arab nationalists and Salafis and Kurdish separatists. If this is a success, I’d hate to see a failure.

A VOLUBLE attempt to describe the Iraq war as a success is widely apparent, and will increase as the Republican National Convention nears. John McCain is staking his campaign on this assertion. There is little doubt that the level of violence in Iraq has subsided noticeably in the last 12 months. But is this “victory”?

Two notions are in play. First is whether what exists now, or will in the near term, is a favorable and sustainable outcome and is due particularly to the “surge” of US troops since early 2007. Second is whether the price of this outcome is acceptable.

On the first matter, the reductions in violence are mainly due to the withdrawal of Moqtada al-Sadr’s militia and the cooperation of many Sunni tribes in ridding Iraq of foreign extremists. A fervent debate among experts is indecisive about why Iraqis pulled back from the wicked killing of 2006 and early 2007. Some is due to a change in US strategy. But all the actors with explosives began to see the futility of their tactics, apparently, and have altered course.

No one knows how sustainable these gains might be. Will Sadr reenter the fray once US troops are drawn down? Will Sunnis return to resistance if Shia political dominance continues?

Civil wars of long standing tend to persist if a broad and enforceable political settlement cannot be reached, and so far none is in sight in Iraq. So the prognosis for more armed conflict, perhaps many years in duration at a low level, remains troubling.

One outcome that seems irreversible is the primacy of Iran. This was widely predicted before the war was started, and it is now apparent. All of Iraq’s leaders, including the president, a Kurd, are friendly with Iran and regard it as an important ally. In Bush circles, this new prominence for Iran is never linked to the war, as if occurring by itself.

So the visible political outcome in Iraq (setting aside the original target of the invasion, the nonexistent WMDs) is not usefully described as a success. There is a level of violence and political fragmentation that in other places would not be hailed as victory. And these recent gains may be temporary.

Perhaps more important are the costs of the venture. The facts are sobering. About 5,000 Americans have been killed, including military personnel, contractors, and aid workers. Another 30,000 or more are wounded, and estimates of those with post-traumatic stress disorder are as high as 300,000. The financial costs are estimated to reach $3 trillion eventually.

For Iraqis, of course, the costs are colossal. While there is a dispute among experts about how many Iraqis have died as a result of the war, the numbers range from 200,000 to one million, and very likely a mid-range estimate is correct. The Iraqi government reports one million or more war widows. About 3.5 million Iraqis have been displaced by the war, most of them living in difficult circumstances in Jordan and Syria. A new study from the Brookings Institution labels the refugees – many impoverished – as a “looming crisis” for the entire region.

More than half the school-age children in Iraq cannot attend school, due to a lack of security, and 40 percent have no access to safe water. A survey conducted in 2006 by the Ministry of Health found a doubling of mortality, much of it due to violence but about an equal amount to disease and accidents, indicating a gradual collapse of the healthcare system.

Globally, the run-up in oil prices is attributable in part to the war, which not only devastates developing countries but has also contributed to a food crisis worldwide. The war has distracted the United States from other issues, as the recent Russian muscle-flexing in the Caucasus illustrates.

Since the war is not over, no one can predict where all these gruesome figures and trends will end up. But the price everyone has paid for this war so far has been exceptionally high. The actual political results for Iraqis remain doubtful. To a dispassionate observer, this does not look like “victory.”

John Tirman is executive director and principal research scientist at the MIT Center for International Studies. He is coauthor and coeditor of “Terror, Insurgency, and the State: Ending Protracted Conflicts.”