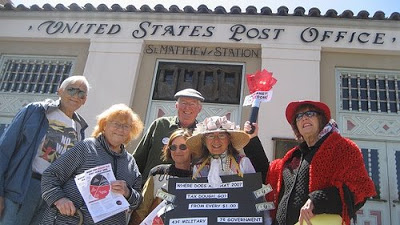 The Raging Grannies, backed by San Mateo Peace Action, demonstrated at the San Mateo, CA post office on “tax day,” as part of Iraq Moratorium 8.
The Iraq Moratorium is a national, grassroots effort uniting individuals and groups who want to end the war and occupation. It encourages people to take some action, individually or with a group, on the third Friday of every month to call for an end to the war.

More than 900 vigils, marches, rallies, speakers, films, and other actions have been listed on the Iraq Moratorium website, www.IraqMoratorium.org , since the monthly events began in September. Already about 60 are listed for May 16, with more coming in daily. The website also posts reports, photos and videos of past actions around the country.

Individual action is also encouraged on Moratorium days, ranging from wearing a button or armband to work or school to writing letters to the editor, calling Congressional representatives, and more.

“Two-thirds of the American people want this war to end,” said Paul Krehbiel, a Pasadena, CA Moratorium organizer. “The Moratorium’s goal is to get those people mobilized and encourage them to speak up and do something. The Silent Majority wants our troops home. We want them to quit being silent and put some pressure on the politicians to listen to the people.”

The Iraq Moratorium is endorsed by more than 80 organizations, including: Veterans for Peace, Military Families Speak Out, U.S. Labor Against the War, and United for Peace and Justice, the nation’s largest peace coalition of some 1,400 groups.

This entry was posted in RagBlog and tagged Dissent, Iraq, Peace Movement. Bookmark the permalink.