Well, this will make things interesting insofar as the Bush administration is not especially willing to concede any further points in the agreement. As Juan Cole points out,

By the time a draft agreement was circulated last week (text courtesy Raed Jarrar), the US military had found itself confined to bases by next June and constrained to leave by 2011; civilian contractors were open to prosecution in Iraqi courts; and off-duty US troops who commit crimes might also find themselves before a qadi or Muslim court judge. There was no mention of long-term bases.

Behind the scenes, Grand Ayatollah Ali Sistani mobilized opposition to the original Bush demands, as an infringement on Iraqi national sovereignty.

In all likelihood, Iraq will go to the UN Security Council for a one-year renewal of the Multinational Forces Mandate. But the Iraqi politicians and people are voting, by their reluctance to acquiesce in the Bush/ al-Maliki plan for a SOFA, for something much closer to Obama’s plan.

Something’s got to give, and I hope it isn’t the Iraqi government. 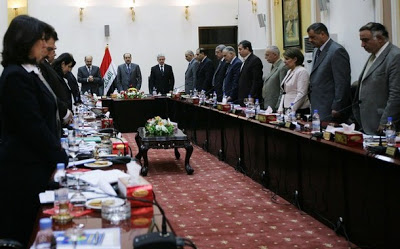 BAGHDAD — Shiite Muslim government ministers raised objections Tuesday to a “final draft” of an agreement to authorize U.S. troops to remain in Iraq, and after a four-and-a-half-hour cabinet meeting Iraq’s government spokesman said that the agreement wouldn’t be finalized in its current form.

The clock is ticking: The United Nations mandate under which U.S. troops are in Iraq expires on Dec. 31.

The agreement, which has been the subject of negotiations between the U.S. and Iraq for more than seven months, sets the end of 2011 as when U.S. troops are to be gone from Iraq.

However, Humam Hamoudi, the Shiite lawmaker who chairs the parliament’s foreign affairs committee, said that Shiite representatives found the wording on the U.S. troop departure too vague and subject to unacceptable conditions. Lawmakers also want to strike a clause that would give the Iraqi government the right to extend the agreement without parliamentary approval if it felt that was advisable.

Hamoudi said that Prime Minister Nouri al Maliki himself raised objections to the draft agreement. “The prime minister said ‘What (the Americans) have given with the right hand they have taken away with the left hand,’ ” Hamoudi said.

Government spokesman Ali al Dabbagh made it clear the current draft won’t be approved as written. “There are amendments that need to be made to the current draft in order to raise the agreement to a nationally acceptable level,” he said in a written statement after the meeting of the cabinet, which is formally known as the Council of Ministers.

It wasn’t clear what would happen next.

U.S. officials said they weren’t disposed to continue negotiating an agreement that was supposedly already in its final form and which U.S. officials have been circulating to members of Congress and talking up to the news media. If there’s no agreement when the U.N. mandate expires, however, U.S. troops would be in the country illegally and probably would be confined to their bases, Iraqi officials have said.

“There is great reluctance to engage further in the drafting process,” Defense Secretary Robert Gates told reporters at the Pentagon. “I don’t think you slam the door shut, but I would say it’s pretty far closed.”

Adm. Michael Mullen, the chairman of the Joint Chiefs of Staff, who was traveling in Latvia, warned that the Iraqi security forces can’t secure Iraq on their own.

“We have pushed this as the top priority for months now,” Mullen said. “It’s time for the Iraqis to make this decision.”

Maliki’s been publicly critical of the agreement since the start of the negotiations and has hinted numerous times that Iraq has the option not to sign the agreement or renew the U.N. mandate.

A senior Iraqi official, who asked not to be named because of the sensitivity of the topic, said he doubts Maliki would press for the agreement to be approved by parliament if his cabinet doesn’t agree to its terms. Maliki asked that officials submit their objections to the agreement in writing by Wednesday afternoon.

The cabinet is the second government group to object to the agreement. The country’s Political Council for National Security also couldn’t come to a decision. Both groups include representatives from nearly all Iraq’s political parties. Neither, however, includes followers of radical Shiite cleric Muqtada al Sadr, who wholly rejects the accord and has demanded that U.S. troops leave now.

“He genuinely understands that there needs to be an agreement,” the official said of Maliki. “But he feels that he has been passed a hot potato.”

According to an official who was present, Maliki made no effort to defend the agreement or to press for its approval during the hours-long cabinet session where minister after minister voiced objections to specific clauses. Only the Kurdish alliance endorsed the latest draft.

The agreement has changed significantly in the favor of the Iraqi government during the months-long negotiations, which Americans began by asking for hundreds of bases inside the country and immunity from Iraqi laws for both American troops and private security contractors.

Those requests were pared down. The current agreement calls for the Americans to leave Iraqi cities by June 30 and to be gone from the country by the end of 2011. American troops would be immune from prosecution by Iraqi authorities as long as they were on duty, but private contractors would be subject to Iraqi law.

(Nancy A. Youssef in Washington contributed to this article.)