Iraqi Women Are Still Suffering the Most 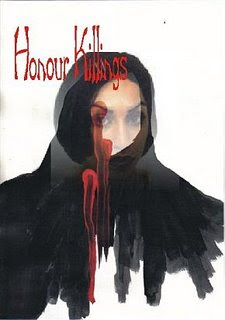 How picture phones have fuelled frenzy of honour killing in Iraq
By Patrick Cockburn / May 17, 2008

SULAYMANIYAH — A dark pool of dried blood and a fallen red scarf mark the place where Ronak, who had fled to a woman’s shelter in the Kurdish city of Sulaymaniyah when she was accused of adultery by her husband, was shot three times by a man hiding on the roof of a nearby building.

Ronak was wounded by bullets in the neck, side and leg and only survived after a four-hour operation. She was the latest victim of a huge increase across Iraq in the number of “honour” killings of women for alleged immorality by their own families.

Many are burnt to death by having petrol or paraffin poured over them and set ablaze. Others are shot or strangled. The United Nations estimates that at least 255 women died in honour-related killings in Kurdistan, home to one fifth of Iraqis, in the first six months of 2007 alone.

The murder of women who are deemed to have disobeyed traditional codes of morality is even more common in the rest of Iraq where government authority has broken down since the overthrow of Saddam Hussein in 2003.

A surprising reason explaining the massive increase in the number of honour killings is the availability of cheap mobile phones able to take pictures. Men photograph themselves making love to their girlfriends and pass the pictures to their friends. This often turns out to be a lethal act of bravado in a society where premarital or extra-marital sex justifies killing.

The first known case of sex recorded on a mobile leading to murder was in 2004. Film of a boy making love with a 17-year-old girl circulated in the Kurdish capital, Arbil. Two days later she was killed by her family and a week later he was murdered by his.

1 Response to Iraqi Women Are Still Suffering the Most