Is Armageddon Closer Than Most Americans Think?

Frankly, I am not so concerned about doomsday and don’t believe it will come to that. But the thoughts that Hirschhorn expresses here are worthy of consideration, and the steep increase in firearms sales is rather disturbing. 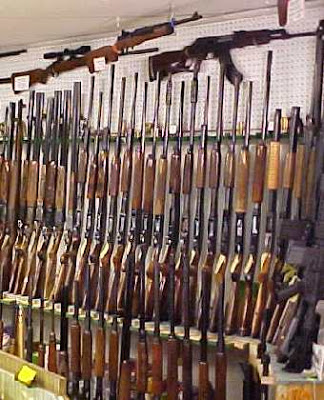 Compared to rioting Europeans, Americans seem like docile, drugged out sheep herded towards the economic cliff, mesmerized by melodic rhetoric of political messiah Barack Obama. Too much hope can precipitate violence.

“I’ve been through Y2K and I’ve been through 9/11. I have never seen people so afraid as what we are seeing right now,” said gun shop owner Scott Moss recently. With more guns per capita easily 250 million privately owned ones and certainly more people in prisons than any other democracy, the intriguing question in this still worsening economic calamity is: If Americans found the courage for political rebellion now, would it preempt massive criminal violence, social havoc and armed rebellion later?

What we see President Obama and Congress doing and debating seem inadequate to restore financial health and security to the vast majority of Americans before millions more lives are devastated. Billions of tax dollars have gone to banks, corporations and others but have not stopped the hemorrhage of our financial lifeblood. More than half a million jobs continue to be lost a month; 3.5 million in the past year. Millions are losing their homes, health insurance and ability to buy food. Those with jobs are afraid to spend money.

As Nobel Prize winning and gloomy economist Paul Krugman said the other day after condemning what is going on in Washington, DC: “the economy is still in free fall” and we may be “falling into an economic abyss.” Harsh words for a harsh reality.

Recently, President Obama said: “A failure to act, and act now, will turn crisis into a catastrophe.” But what really matters is exactly what actions the government takes and whether they are what is needed. Besides, about the same time, his senior advisor David Axelrod said on television that “we have an economic catastrophe.” For most Americans, catastrophe seems more accurate.

Meanwhile, the elite Upper Class that stole the nation’s wealth in recent years with their greed and political clout, and destroyed the global economic system, are still sitting pretty in their McMansions, penthouses, private jets and yachts. They still enjoy their $50,000+ cars, still wine and dine in incredibly expensive restaurants, and still retain more wealth than ordinary people can imagine. Brioni men’s suits for $40,000+ are selling fast.

What do we see? Millions of people getting notices that they have lots their jobs, getting eviction notices, applying for bankruptcy, trying to get unemployment benefits, standing on long lines to get a shot at few jobs, filling crowded hospital emergency rooms to get medical help, taking their children out of child care they no longer can afford, and buying fewer and cheaper foods or seeking free food.

No wonder our politicians look like dithering, confused idiots arguing among themselves as we continue falling into economic hell. We simply are not demanding enough of those we elected.

It’s as if most Americans are patiently waiting to be rescued by winning the lottery. Is it hope or stupidity?

Meantime, President Obama has successfully stimulated one business sector. Since November, gun and ammunition sales have soared, as have requests for concealed carry permits. “Our sales are up 15 to 20 percent since October,” says the owner of Shooter’s Service in Livonia, Michigan. “It’s not the 40 percent other stores are reporting, but it’s good business.” Oakland County in Michigan issued 130 percent more concealed carry weapon permits in January than a year earlier. Such permits are up as much as 90 percent in some Western North Carolina counties. According to the FBI, background checks for gun sales in January jumped 29 percent over January 2008; this followed a 24 percent rise in December and a 42 percent increase in November. In many places gun sales have dropped because of shortages.

What awaits us when hope becomes futile and all confidence in the government is lost? Gun owner Chad Roberts in Tennessee said this recently: “With the economy like it is more people are going to be desperate wanting to steal from you.” So, perhaps we will see a contagious, rapid descent into mass criminal violence. As suffering, gun-toting Americans resort to looting, theft, robbery, burglary, assaults and other economically driven violent acts to get what is needed to survive, and other gun owners shoot to defend what they have. The fabric of civilized society ripped apart. Brutal police and military actions result, and for many no police protection. Constitutional freedoms suspended in a national emergency. Government threatened by armed rebellion as gun-toting citizens put their Second Amendment rights to the ultimate use.

This nightmare scenario may happen because free people waited too long, remained too hopeful, put too much faith in elections. Armageddon is closer than most Americans realize. Beyond catastrophe lies mob rule, a doomsday post-democracy, disintegration, collapse, chaos. Americans sucked into the economic abyss where violence replaces politics.

Hope will be a distant memory. One way to avoid the abyss is to give Americans what they have a constitutional right to have, something the Founders in their wisdom knew we would need. They provided an option in Article V of the Constitution that Congress has refused to honor, even though the one and only requirement has long been met. It is a convention of state delegates to consider proposals for constitutional amendments. This would provide a national forum for the public to seriously become involved with possible ways to reform and improve our government structure. Over 700 applications from state legislatures for an Article V convention have been submitted from all 50 states; they are being made available for the first time at foavc.org. Because the convention can only propose amendments that still must be ratified by three-quarters of the states there really is nothing to fear about harming our Constitution. There is now considerable interest in many states to push for a convention.

In these dismal times using what the Founders gave us makes more sense than ever before. Americans need more than two-party politics. They need a serious debate about structural reforms through constitutional amendments that can attack the deep rooted corruption and incompetence that plague the federal government and contributed to creating our current economic meltdown.

Rather than fear a convention, embrace it. It is far more rational to fear sticking with our status quo dysfunctional government or, worse, the degeneration into violent upheaval. Following the Constitution’s path to get reforms should be preferred.

[Joel S. Hirschhorn is a co-founder of Friends of the Article V Convention; contact him through delusionaldemocracy.com.]

This entry was posted in RagBlog and tagged Constitutional Law, Politics, Social Protest. Bookmark the permalink.