Israel: Going Out of Their Way to Maintain Their Pariah Status 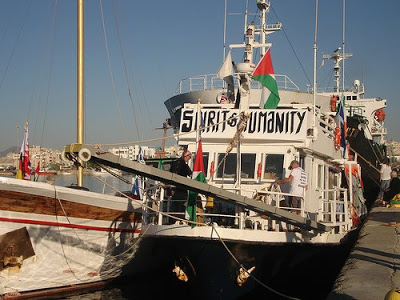 The Spirit of Humanity shortly before leaving Cyprus. Photo: Free Gaza.
Pirates of the Mediterranean
By Yvonne Ridley / July 1, 2009

The arrogance of Israel is nothing short of breath-taking.

On the eve of one of the most damning reports ever to be published on human rights abuses and suspected war crimes, Israel committed an act of piracy.

While western naval fleets are patrolling the waters off the coast of Africa, acts of piracy are being carried out routinely in the Mediterranean.

But the international community leaders couldn’t care less because most of those who are kidnapped, shot at and hijacked at sea are Palestinian fishermen from Gaza.

However yesterday Israel crossed a line after firing on and boarding a boat carrying aid and peace activists to Gaza.

The 21 on board included former US Congresswoman Cynthia McKinney and Nobel laureate Mairead Maguire, who were taken prisoner by the Israeli navy after gunboats surrounded and seized the Free Gaza Movement relief boat ‘Spirit of Humanity’ on Monday.

The aid was seized, their mobile phones confiscated and no doubt cameras capturing the illegal actions of the Israelis were also removed.

“This is an outrageous violation of international law against us. Our boat was not in Israeli waters, and we were on a human rights mission to the Gaza Strip,” said Cynthia McKinney, the Green Party’s 2008 candidate for President of the United States.

“President Obama just told Israel to let in humanitarian and reconstruction supplies, and that’s exactly what we tried to do. We’re asking the international community to demand our release so we can resume our journey.”

In the past the Israeli Navy has claimed that boats have entered their territorial waters and breached their part of the sea in the eastern Med.

However, thousands across the world who followed the progress of the Free Gaza Movement boat Spirit of Humanity by internet, GPS, Twitter and various other means of communications over the last 30 hours know for sure that the boat was illegally stopped in international waters.

This is piracy. Nothing more. Nothing less.

It’s anyone’s guess what will happen to the Humanity’s cargo of medical supplies, cement, olive trees, and children’s toys.

But what we need from Barak Obama and Gordon Brown (there are at least half a dozen Brits on that boat) is strong leadership in which Israel apologises and allows the boat and its passengers to continue the journey into Gaza.

The G8 leaders all know what the Israeli Army did in Gaza and the war crimes that were carried out making it impossible for the Zionist military to travel into most European countries for fear of being arrested.

And in the next 24 hours Amnesty International will spell out exactly what was done on the ground during that 22-day war.

We know that the fourth largest military in the world, a military given weapons by Britain and the US, destroyed 50,000 homes, 800 industrial properties and 200 schools.

During a recent trip to Gaza with the Viva Palestina convoy, I saw the scores of mosques bombed – even orphanages had been targeted. The net result was the slaughter of more than 1,400 civilians, including hundreds of children.

How long is Israel going to be allowed to behave as it wants … and even likes?

I saw, with disbelief, some of the taunting, sadistic messages scrawled on lounge walls in bombed out homes by departing Israeli soldiers – one even left his email for “any complaints”.

I remember when Tony Blair, called the Taliban the most evil, brutal regime in the world and he justified this statement because he said they didn’t even allow children to fly kites.

He wondered at the mentality of a regime which could be so cruel to children.

That was way back in November 2001. Well I wonder what he would think of a regime which blocks cherries, kiwi fruit and chocolate from reaching the hands of the children in Gaza? Yes, that’s how evil this Zionist regime is … it can’t even bear the thought of these poor kids receiving a few tasty treats.

Every week, about 10 officers from the Israel Defense Force’s Coordinator of Government Activities in the Territories (COGAT) unit meet to decide what sort of food the 1.5 million inhabitants of the Gaza Strip can eat.

I will return to these three shameful soldiers at a later date, but let’s return to today’s events which has, in my view, reconfirmed Israel as a rogue state by launching into international piracy yet again.

You will notice the top of this story is called Pirates of the Mediterranean II – that’s because I wrote an article in December revealing how another free Gaza Movement boat, the SS Dignity, was rammed by an Israeli naval gunboat.

The act of aggression on a peace mission was launched in international waters 90 miles off Gaza, without any warning to the captain of the Dignity or the crew. Israel claimed the incident was an accident and that its naval officers had made numerous attempts to communicate with the Dignity. The israelis ‘accidentally’ rammed the boat no less than three times.

The Israelis accused the international activists then of “seeking provocation more than ever.” Isn’t it amazing how the Zionist State suddenly goes belly up and adopts a victim mentality?

Exactly what the hell is Israel up to by banning or trying to prevent boats from entering waters not in its territory? This is the Mediterranean. Just when did Israel assume complete authority of the Med?

Israel’s deplorable attack yesterday, and its previous one on the unarmed Dignity is a violation of both international maritime law and the UN Convention on the Law of the Sea, which states, “the high seas should be reserved for peaceful purposes.”

Delivering aid to the needy is just such a “peaceful purpose.” Deliberately ramming or hijacking mercy ships and endangering its passengers is an act of terrorism and piracy.

I say Western fleets should now head to the Mediterranean to crack down on this breed of pirates who make the Somali gangs look like Captain Pugwash and co.

The Somali pirates are motivated by money – that makes them criminals. The Israelis commit these acts out of sadistic pleasure … what does that make them?

And if they are allowed to continue, what will that make the likes of Obama, Brown and the other cabal of foreign leaders who look the other way?

Enough is enough. The time has come to acknowledge that Israel is a failed project, a rogu e state – and a danger to ordinary, decent, law-abiding members of the public.

Until it comes to heel the international community needs to impose sanctions, freeze its assets, stop selling arms and installing a UN peacekeeping Force to bring it under control because it is a menace to its neighbours and the wider world.

For more information and updates, see the Free Gaza Movement web site, including the latest release on the seizure of the relief boat.

For communications and updates from Cynthia McKinney, visit her Green Party page and blog.

[Journalist Yvonne Ridley and film-maker Aki Nawaz sailed to Gaza with the FGM on the first mission to break the siege in August 2008. Ridley was given a media award at the annual Muslim News awards. Her website is www.yvonneridley.org.]

This entry was posted in RagBlog and tagged Crimes Against Humanity, Israel, Palestine, Palestinian Blockade. Bookmark the permalink.

2 Responses to Israel: Going Out of Their Way to Maintain Their Pariah Status