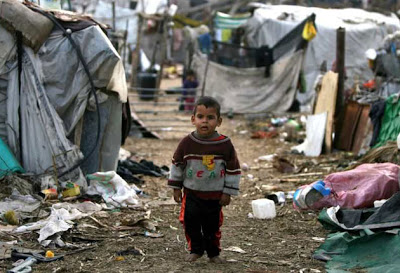 The Red Cross says the diets of those living in the impoverished Gaza Strip are deteriorating. Photo: AFP/Getty/Mahmud Hams.
Chronic malnutrition in Gaza blamed on Israel
By Donald Macintyre / November 15, 2008

The Israeli blockade of Gaza has led to a steady rise in chronic malnutrition among the 1.5 million people living in the strip, according to a leaked report from the Red Cross.

It chronicles the “devastating” effect of the siege that Israel imposed after Hamas seized control in June 2007 and notes that the dramatic fall in living standards has triggered a shift in diet that will damage the long-term health of those living in Gaza and has led to alarming deficiencies in iron, vitamin A and vitamin D.

The 46-page report from the International Committee of the Red Cross – seen by The Independent – is the most authoritative yet on the impact that Israel’s closure of crossings to commercial goods has had on Gazan families and their diets.

The report says the heavy restrictions on all major sectors of Gaza’s economy, compounded by a cost of living increase of at least 40 per cent, is causing “progressive deterioration in food security for up to 70 per cent of Gaza’s population”. That in turn is forcing people to cut household expenditures down to “survival levels”.

“Chronic malnutrition is on a steadily rising trend and micronutrient deficiencies are of great concern,” it said.

Since last year, the report found, there had been a switch to “low cost/high energy” cereals, sugar and oil, away from higher-cost animal products and fresh fruit and vegetables. Such a shift “increases exposure to micronutrient deficiencies which in turn will affect their health and wellbeing in the long term.”

Israel has often said that it will not allow a humanitarian crisis to develop in Gaza and the report says that the groups surveyed had “accessed their annual nutritional energy needs”. But it warned governments, including Israel’s, that “food insecurity and undernutrition, including micronutrient deficiencies” were occurring in the absence of “overt food shortages”.

A 2001 Food and Agriculture Organisation definition classifies “food security” as when “all people, at all times, have physical, social and economic access to sufficient, safe and nutritious food that meets their dietary needs and food preferences for an active and healthy life.”

The Red Cross report says that “the embargo has had a devastating effect for a large proportion of households who have had to make major changes on the composition of their food basket.” Households were now obtaining 80 per cent of their calories from cereals, sugar and oil. “The actual food basket is considered to be insufficient from a nutritional perspective.” The report paints a bleak picture of an increasingly impoverished and indebted lower-income population. People are selling assets, slashing the quality and quantity of meals, cutting back on clothing and children’s education, scavenging for discarded materials – and even grass for animal fodder – that they can sell and are depending on dwindling loans and handouts from slightly better-off relatives.

In the urban sector, in which about 106,000 employees lost their jobs after the June 2007 shutdown, about 40 per cent are now classified as “very poor”, earning less than 500 shekels (£87) a month to provide for an average household of seven to nine people.

The report quotes a former owner of a small, home-based sewing factory, who said he had laid off his 10 workers in July 2007. “Since then I earn no more than 300 shekels per month by sewing from time to time neighbours’ and relatives’ clothes. I sold my wife’s jewellery and my brother is transferring 250 shekels every month … I do not really know what to say to my children.” Others said they were not able to give their children pocket money.

In agriculture, on which 27 percent of Gaza’s population depends, exports are at a halt and, like fisheries, the sector has seen a 50 per cent fall in incomes since the siege began. Among the two-fifths classified as “very poor”, average per capita spending is down to 50p a day. In the fisheries sector, which has been hit by fuel shortages and narrow, Israeli-imposed fishing limits, “People’s coping mechanisms are very limited and those households that still have jewellery and even non-essential appliances sell them”.

The report says that if the Israeli-imposed embargo is maintained, “economic disintegration will continue and wider segments of the Gaza population will become food insecure”.

Arguing that the removal of restrictions on trade “can reverse the trend of impoverishment”, the Red Cross warns that “the prolongation of the restrictions risks permanently damaging households’ capacity to recover and undermines their ability to attain food security in the long term.”

The detailed Gaza fieldwork for the report was carried out between May and July. An International Monetary Fund report confirmed in late September that the Gaza economy “continued to weaken”.

Mark Regev, the spokesman for Israeli Prime Minister Ehud Olmert, said that, contrary to hopes when Israel pulled out of Gaza, the Gazan people were being “held hostage” to Hamas’s “extremist and nihilist” ideology which was causing undoubted suffering. If Hamas focused resources on the “diet of the people” instead of on “Qassam rockets and violent jihadism” then “this sort of problem would not exist”, he said.

This entry was posted in RagBlog and tagged Israel, Palestine, Palestinian Blockade, Poverty. Bookmark the permalink.