It Is Remarkable How Prescient Eisenhower’s Concerns Were 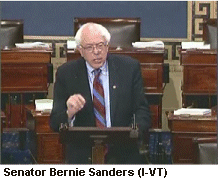 “The legislation we are dealing with today authorizes more than $500 billion, and even in Washington that is a heck of a lot of money,” said Sanders, who caucuses with the Democrats. “That expenditure comes at a time when we have massive amounts of unmet needs in our country, when there is a crumbling infrastructure, a need to invest in sustainable energy, a need to address education, and many other needs.”

“Our job as Members of Congress is to make sure we do our best to see that not one nickel — not one nickel — is spent in waste or in fraud or unwisely. But just as we should do that with the Department of Agriculture or with Human Services, we should also do it with the Defense Department; in fact, even more so with the Defense Department, because their budget is so huge. It appears that not a week goes by when one doesn’t open a newspaper or see a television program which deals with another example of horrendous waste, fraud, or abuse which takes place within the Department of Defense.”

The Vermont Senator, who is often a more staunch defender of Democratic-party ideals than the majority of Senate Democrats, then went on to give examples of how the Bush administration has allowed billions of dollars to be wasted — in a wasted, Iraq war — while so many pressing needs go unmet at home.

“In March of this year, we learned that a 22-year-old Defense contractor peddled as much as $300 million in old ammunition, much of it defective, to the Afghan Army and to their police forces. That is right. AEY, a fly-by-night company, landed the huge contract, despite its record of botched dealings with the State Department and Defense Department. In fact, the State Department had placed this company on a watch list of companies suspected of illegal arms transactions.

“The Pentagon inspector general revealed that $321 million was paid out to cover salaries of 1,000 anonymous employees in the Iraqi Ministry of Finance. That amounts to $320,000 per employee–not bad in Iraq where people do very well if they make $50 or $60 a week, but we are not even sure that the employees saw any of this money.

“We also learned not terribly long ago that the Army ousted the contracting officer overseeing Kellogg, Brown & Root’s huge Iraq support contract when this distinguished public servant refused to approve paying the company more than $1 billion in questionable charges. In other words, he did his job. He took a hard look at where this money was going. There were red flags popping up all over the place. He said: Wait a minute. We are not going to pay this money. His reward was not a commendation but his firing.

“The Air Force paid a private U.S. contractor $32 million to construct a Ramadi, Iraq airbase. That is OK, except the only problem is the contractor cashed a check and the facility was never built–$32 million for a project never undertaken.

“Another contractor was paid $142 million to construct Iraqi prisons, fire stations, and police facilities that were either never started or never completed–$142 million.”

Sanders also talked about the Truman Committee that then-Senator Harry Truman created in the 1940s to root out similar fraud among defense contractors and said the Pentagon’s leaders are not doing enough to see that Americans get their money’s worth for national defense.

“Was Harry Truman unpatriotic for demanding increased congressional oversight on the War Department and defense contractors at a moment of national crisis during World War II?” asked Sanders. “The answer is, of course, no, he was not.”

And the Vermont Senator brought up Eisenhower’s famous words in which the Republican president seemed to see the Bush-Cheney reign coming from almost 50 years away.

“A few days before he left office in 1961, President Eisenhower gave one of the most prophetic speeches ever given in the White House. Here is what Eisenhower — a Republican, I should add — what Eisenhower said: ‘In the councils of government, we must guard against the acquisition of unwarranted influence, whether sought or unsought, by the military industrial complex. The potential for the disastrous rise of misplaced power exists and will persist.'”

Concluded Sanders: “Fast forward 48 years to the last months of George W. Bush’s Presidency. It is remarkable how prescient Eisenhower’s concerns were.”

This entry was posted in RagBlog and tagged Congress, Military Industrial Complex. Bookmark the permalink.