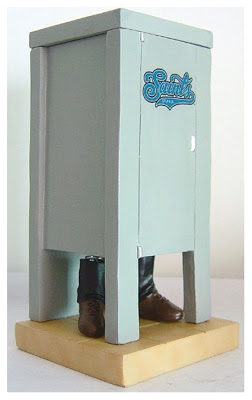 Dubbed a “bobblefoot” (as opposed to a bobblehead doll), the polyresin giveaway depicts an occupied bathroom stall (the inhabitant’s pants and shoes can be seen below the stall’s panels). When the St. Paul Saints’s “bobblefoot” is shaken, one of the spring-loaded feet taps. The keepsake, which will be handed out to the first 2500 fans attending the Saints’s May 25 game against the Fort Worth Cats, is pictured above.

According to an undercover cop’s account, while in the airport bathroom, Craig “tapped his toes several times and moved his foot closer to my foot.” The officer, Sgt. Dave Karsnia, was seated in an adjoining stall and believed Craig’s footsie was a signal that the politician was seeking sex. Craig has denied this, blaming his “wide stance” for Karsnia’s unfortunate misinterpretation.

What caught my attention about this story is that I have actually seen the St. Paul Saints play baseball. While attending a family reunion in Minneapolis, where my oldest nephew was getting married, we went to see the Saints at their stadium next to the railroad tracks in St. Paul.

They are an independent minor league team, unaffiliated with any major league team; their stadium has the best food (I loved the moose bratwurst), and, as the article verifies, the best promotions. On the night we attended, they had suspended a randomly-selected fan over the center-field fence, and promised all in attendance some prize if the fan was hit by a home run during the game. Truly wacky!

Their stadium is a really old, rickety structure, and the fans are incredibly laid back. But the brats – that’s the best part!

Thanks for running that story and awakening these pleasant memories!