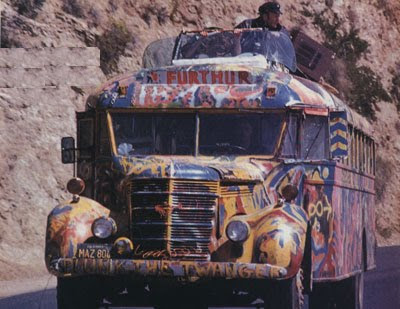 HOUSTON — In the heat of a July Houston morning in 1964, residents of the quiet Southampton neighborhood woke up to find a strangely painted school bus parked in front of an unassuming two-story brick house in the middle of the block.

The vintage 1939 International Harvester with its passengers of “Merry Pranksters” drove half way across the United States and was now parked in front of the house of novelist and Rice University professor, Larry McMurtry. The Southampton neighbors would learn that the brightly painted bus whose destination plate read “FURTHUR,” with two u’s, was filled with strangely acting and even stranger looking people from California.

The leader of the Merry Pranksters was author Ken Kesey, whose novel, Sometimes a Great Notion, had just been published that summer. Their cross-country road trip to New York City was in part a celebration to commemorate the publication of his second novel, as well as the fulfillment of a request by his publisher for a personal appearance and an excuse to visit the World’s Fair taking place in the borough of Queens.

Fueled by the then-legal hallucinogenic drug LSD, Kesey and the Pranksters stopped in Houston along the way to visit McMurtry, who Kesey knew from their days at Stanford.

McMurtry lived with his 2-year-old son, James, on the oak-lined street near Rice University, where he taught undergraduate English. 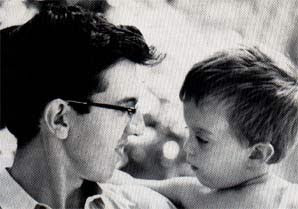 Larry McMurtry and son, James, 1964. Photo from The Magic Bus.
McMurtry was also experiencing success in his life during this time. His inaugural novel, Horseman, Pass By, had been adapted into a screenplay and released as the feature-length movie, Hud, staring Paul Newman and Melvyn Douglas, the previous year.

“I remember walking down Quenby Street one afternoon and seeing the school bus parked in front of the McMurtry’s house,” said Kentucky-based artist Joan Wilhoit. “It was very atypical and pretty damn psychedelic with lots of colors. The Pranksters were very accommodating and invited us on the bus. They were very different, sort of proto-hippies, and I remember they painted their sneakers with Day-Glo paint. My parents befriended them and brought old clothes and hand-me-downs to those who needed it. My parents weren’t rude like some of the other neighbors were.”

Wilhoit, who was nine at the time, remembers that not all the neighbors were as welcoming as her parents and that some made sarcastic remarks about the Pranksters.

“’Do you have a bathroom on that bus?’ I remember one our neighbors asking the Pranksters through the school bus window,” the former Houstonian recounted. “I also remember hearing about the ‘naked girl’ and I thought it was the strangest thing how the police were called and how she had to be admitted to a psych ward of some Houston hospital.”

“Stark Naked,” as she was referred to in Tom Wolfe’s Electric Kool-Aid Acid Test, the novel that chronicled the exploits of Kesey and the Pranksters in the 1960s, was a bus passenger apparently “tripping” throughout her bus ride to Houston, who discarded her clothing in favor of a blanket that she wore for the duration of the journey. Upon her arrival in Houston, she experienced an episode of “lysergically-induced” psychosis, and confused McMurtry’s toddler son with her own estranged child, “Frankie.” 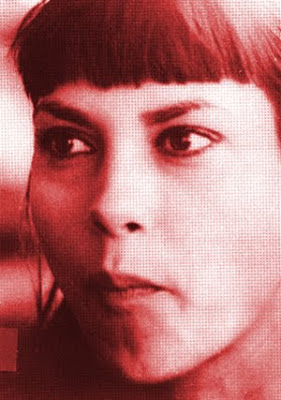 “Stark Naked” (aka “The Beauty Witch”) wore nothing but a blanket. Photo from The Magic Bus.
Three years later, the brightly painted bus was parked once again in front of McMurtry’s house on the oak-lined street near Rice Village. Kesey and the Pranksters returned to Houston in March 1967 to visit their old friend and to conduct what is purported to have been the last “acid test.” The social experiment was staged in the dining room of Brown College, a residential facility on the campus of Rice University, with McMurtry acting as faculty sponsor.

“I would have been 14 years old when they returned,” said Pricilla Boston (nee Ebersole), an employee of the department of state health services in Austin and the mother of two teen-aged sons.

I remember getting off the school bus from junior high one afternoon and seeing that the painted bus was parked in front of Mr. McMurtry’s house again. It was immensely colorful and there was no missing it, that’s for sure. All the kids in the neighborhood used to play street games at night a lot and it was almost like there was another set of kids in the neighborhood.

They had a youthful, fun vibe about them. I remember this one skinny guy in particular who would interact with us; he was younger than the others and he showed us the inside of the bus. He once asked us to go home and look in our parents’ medicine cabinet to see if they had any bottles of pills and bring them to him. I was asking myself “Why would he want those?”

Boston recounted following the skinny Prankster’s instructions and looking in her parent’s cabinet. “I don’t remember whether I brought him anything or not,” she said, “I just remember having a sense of what I was doing as being a little bit naughty.”

Although Kesey’s arrival and the ensuing acid test were promoted as a “concert” in the March 9 issue of the Rice Thresher, the campus student newspaper, this non-event turned out to be an acid test in name only. The promise of a reenactment of the “tests” conducted in California between 1965 and 1966 never materialized. Absent was the liquid light show, the live, amplified rock music, the pulsating strobe lights and movie projector images on the walls.

Also conspicuously absent was the mass dispensation and ingestion of psychotropic drugs by the Rice student body and other “assorted weirdos” in attendance. Instead, the Pranksters indulged the more than 200 attendees with a “madcap improvisation” of toy dart-gun fights, human dog piles, deep breathing demonstrations by Kesey himself, and rides on the “magic bus” around the Rice campus.

“The great Kesey affair was an absolute dud,” reported the Houston Post on March 21. “Some of the kids hissed while he [Kesey] read some kind of incantation, and others just left talking about what a drag it was.” 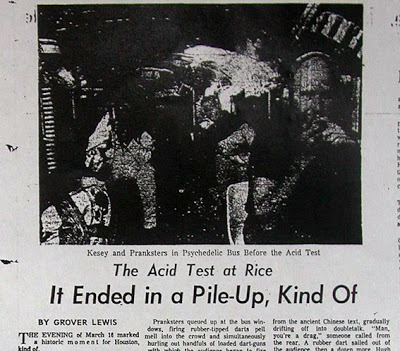 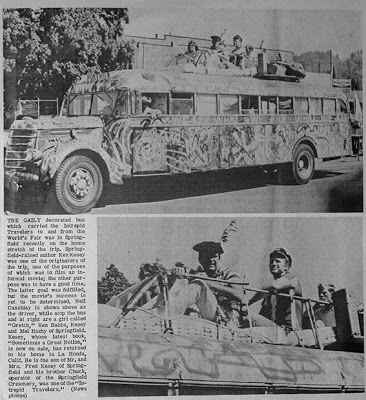 Merry Pranksters in the news, 1964. Top, in Houston, and below, in Springfield, Ohio. 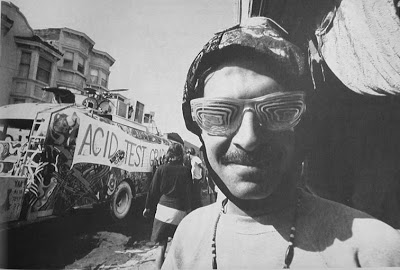 Prankster Hermit and the original bus. Photo from Lysergic Pranksters in Texas. 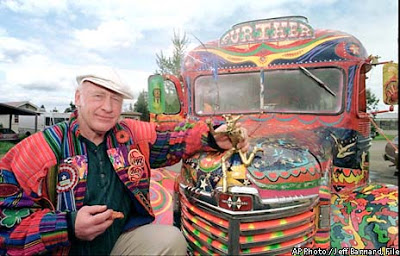 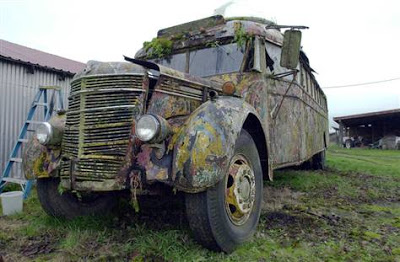 Top, Ken Kesey with restored bus, by then renamed “Further” with an “e”. Below, the 1939 International Harvester, before restoration, at the Kesey family farm in Pleasant Hill, Oregon, after being stored in the swamp for 15 years. Photo by Jeff Barnard / AP
The Rag Blog