Jack A. Smith : Are Labor and the Democrats in an Abusive Relationship? 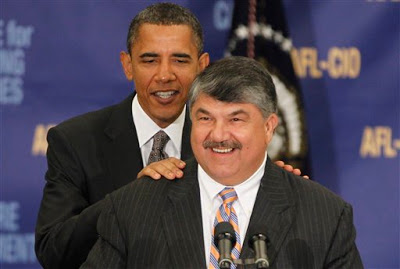 President Obama and the AFL-CIO’s Trumka: Putting on a happy face? Photo from AP.
An abusive relationship?
The labor movement and the Democrats

A union movement that has tethered itself to the Democratic Party since the mid-1930s won’t be directly critical because it doesn’t know where else to go.

New anti-union legislation was passed by Congress earlier this month despite a Democratic majority in the Senate and Barack Obama in the White House.

It’s one more indication that America’s unions are over a barrel. The leadership of the Democratic Party — which is dependent on union support and money, especially this presidential election year — knows of labor’s plight, says it sympathizes, and goes off whistling an idle tune.

President Obama and the Democratic House and Senate leadership nod with compassion but do virtually nothing when the unions seek support for the removal of decades of anti-union legislation.

This has been going on for a long time. It is the main reason why the rich United States has the weakest protections for working people of all the wealthy democracies in the Organization for Economic Cooperation and Development (OECD), and of many developing countries as well.

It is bad enough when the party known as “labor’s friend” ignores past injustices, or even refuses to act on a labor priority (such as the Employee Free Choice Act). It’s another matter when Democratic votes make it possible to perpetrate new anti-labor injuries, as took place February 6, 2012, when the Senate passed the Federal Aviation Administration (FAA) reauthorization bill over union objections.

The worst part of the new legislation weakened bargaining rights for workers in the aviation and rail industries by increasing from 35% to 50% the number of worker signatures required to allow an election for union recognition. It was strongly backed by the airline industry.

Senate Democrats called the final version of the bill the best “compromise” possible with the reactionary House measure. “That’s a step back, not a compromise,” commented International Association of Machinists president Tom Buffenbarger, a sentiment shared by many unions.

The Senate vote was 70-20. Only 15 Democrats voted against the measure, as did five republicans. Three of the Democrats voting “no” were from the Northeast: Blumenthal (CT), Gillibrand (NY), and Leahy (VT).

The bill allocates $63.3 billion to the agency through September 2015, but it wasn’t even necessary to pass the present measure at all. FAA reauthorization has been extended for the last four years by temporary funding, and this could have been continued until the labor restrictions were excised.

After the Senate vote, the Association of Flight Attendants-CWA declared: “We will not forget, and we will continue to build a movement of the 99% to stand up and fight back.” The union praised the Democrats who stood up for collective bargaining, saying they “should be lauded as heroes.” But they said nothing about the majority of Senate Democrats who made the legislation possible.

The labor movement was either quiet or moderately critical of the bill after the vote, even though the expectation was that President Obama would sign the measure into law.

The reason? This is an election year, and a union movement that has tethered itself to the Democratic Party since the mid-1930s won’t be directly critical because it doesn’t know where else to go. So it will spend hundreds of millions of dollars on a party that does all the taking and hardly any giving.

Labor sees it the way most liberals, progressives, Latinos, African Americans, and average Democratic voters see it: The Republicans are much worse in terms of the interests of all working families. There are only two plausible parties, both entirely devoted to the ruling elite, but one is the relatively lesser “evil” to the other. That’s how the American political system is rigged by the 1%.

What this means is that the Democrats need be only half-heartedly supportive of the union movement at best, in between periods of indifference, to enjoy labor’s abundant campaign contributions and other forms of electoral support. Here’s an example:

The draconian anti-labor Taft-Hartley law, passed by Congress 65 years ago, gravely weakened union rights by eviscerating aspects of the New Deal’s National Labor Relations Act. There were several occasions over the decades when the Democrats enjoyed control of the White House, Senate and House (such as in the first two years of the Obama government, 2009-10), but the law remains on the books. The unions no longer bring up the issue, knowing that a substantial number of Democratic politicians would rather handle snakes than take on Taft-Hartley.

Given the history of the U.S. labor movement, it’s remarkable that it finds itself in this situation, and doesn’t at least demand adequate compensation for its generous, unstinting support.

American unions heroically led intensive struggles against oppressive corporate and government policies for many decades starting in the 1880s. They managed to obtain important rights for the workers, from the eight-hour day and paid vacations, to healthcare, pensions, and much more.

Often socialists and communists were in the front ranks of the union struggles and were the most reliable fighters, even as the top leadership of the labor movement gravitated to the right. Left participation was virtually crushed in the late 1940s when the internal purges began, and in the 1950s when the government-backed red hunts erupted throughout the country.

All the left militants were kicked out, except in a few progressive independent unions, and the commanding leadership of the union movement consisted of Cold Warriors and supporters of the Vietnam War who performed services abroad on behalf of Washington’s anti-communist crusade.

The leaders discouraged any talk of class struggle and even seemed to ban the use of the term “working class.” Even today it’s usually “working families” at best, and that all-inclusive egalitarian community known as the “middle class,” which seems to include everyone earning between $25 thousand and $250 thousand a year. (Brother can you spare a hundred grand?)

For many decades the labor movement was controlled at the very top by leaders who seemed to work more closely with big business and the government than with the rank and file. The labor movement finally began to break with the flagrant “business unionism” symbolized by the successive leaderships of Samuel Gompers, George Meany and Lane Kirkland when the AFL-CIO elected decent John Sweeney as president of the largest labor federation in 1995. He brought about a few reforms.

Sweeney was succeeded by current president John Trumka — a Democratic loyalist, of course, but one who from time to time seems interested in a certain degree of “union independence.”

The AFL-CIO, Change to Win, and independent unions worked hard for Obama in 2008, and were ecstatic when he was elected. But by 2011 — following Obama’s repeated failures to stick up for working people and the unions — Trumka began mentioning “independence” more frequently, even hinting that future support might be based on the Democratic Party’s actual performance, not its mere lesser “evil” existence.

This year it probably only means withholding funds from a few of the worst Blue Dogs seeking reelection, and perhaps opposing a couple of conservative Democrats in primaries.

But at least it’s a limited start, although unions are expected to be entirely silent about Obama’s abundant shortcomings toward the workers and oppressed during the campaign. One example among many are the large teacher unions, who oppose the White House education plan but will work hard to get him reelected, as will the entire labor movement.

So far, for all their hundreds of millions of dollars and at least a memory of labor’s brave militancy, dramatic strikes and sit-downs, and the righteousness of class struggle, there’s not a peep out of the unions about ever launching a serious labor party to represent the interests of the working class, middle class, oppressed minorities, and the poorest sector.

Until something much better comes along — and if it’s not a labor party what is it? — the union movement seems ready to stick with the middling Democrats for fear of the greater “evil,” thus indefinitely prolonging the uncompromised domination of American society by the top 1% and its minions.

This also means that in addition to the long-time wrongs done to the workers’ movement that will not be righted, and the pro-worker legislation that will not be fought for by the Democrats, the union movement will be the occasional object of anti-labor shenanigans by its “friends” in Washington as happened this month in the FAA fiasco.

The labor movement is weak these days compared to some earlier periods. But who’s to say this will always be the case?

The great labor leader Eugene V. Debs thoroughly understood the extreme problems and serious shortcomings of the union movement, perhaps better than anyone else, and elaborated them all in a 1894 declaration that ends with these words: “Not withstanding all of this, it is today the most vital and potential power this planet has ever known, and its historic mission of emancipating the workers of the world from the thralldom of the ages is as certain of ultimate realization as the setting of the sun.”