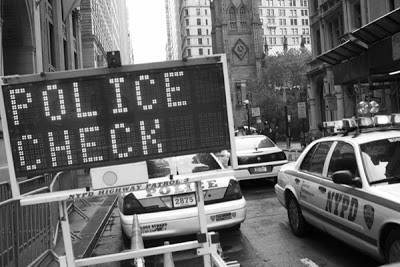 Another sign of the times. Image from City Limits.
Our civil liberties under attack:
Big Brother’s getting even bigger


Abuses of civil liberties are taking place with increasing frequency, but the public outcry has mainly been muted, an enticement for the authorities to go even further.

Government surveillance and attacks on the privacy of American citizens were bad enough under the Bush regime but they are getting even worse during the Obama years.

In addition to his retaining President George W. Bush’s many excesses, such as the Patriot Act, new information about the erosion of civil liberties emerges repeatedly during the era of President Barack Obama from the federal government, the courts, and various police forces.

The Supreme Court added judicial insult to personal injury April 2 when it ruled 5-4 that jail officials may strip-search anyone arrested for any offense, even a trifle, as they are being incarcerated, even if they are awaiting a hearing or trial. The four ultraconservative judges were joined by Justice Anthony M. Kennedy.

According to the ACLU’s Steven R. Shapiro, the “decision jeopardizes the privacy rights of millions of people who are arrested each year and brought to jail, often for minor offenses. Being forced to strip naked is a humiliating experience that no one should have to endure absent reasonable suspicion.”

A day before the strip-search outrage, the New York Times reported that

law enforcement tracking of cellphones… has become a powerful and widely used surveillance tool for local police officials, with hundreds of departments, large and small, often using it aggressively with little or no court oversight, documents show… One police training manual describes cellphones as “the virtual biographer of our daily activities,” providing a hunting ground for learning contacts and travels.

Other abuses of civil liberties are taking place with increasing frequency, but the public outcry has mainly been muted, an enticement for the authorities to go even further. On March 23, the American Civil Liberties Union reported:

The Obama administration has extended the time the National Counterterrorism Center (NCTC) can collect and hold on to records on U.S. citizens and residents from 180 days to five years, even where those people have no suspected ties to terrorism. The new NCTC guidelines, which were approved by Attorney General Eric Holder, will give the intelligence community much broader access to information about Americans retained in various government databases…

Authorizing the “temporary” retention of non-terrorism-related citizens and resident information for five years essentially removes the restraint against wholesale collection of our personal information by the government, and puts all Americans at risk of unjustified scrutiny. Such unfettered collection risks reviving the Bush administration’s Total Information Awareness program, which Congress killed in 2003.

For most Americans, it was just life as we’ve known it since September 11, 2001, since we scared ourselves to death and accepted that just about anything goes, as long as it supposedly involves protecting us from terrorists. Basic information or misinformation, possibly about you, is to be stored away for five years — or until some other attorney general and director of national intelligence thinks it’s even more practical and effective to keep you on file for 10 years, 20 years, or until death do us part — and it hardly made a ripple.

A week earlier, new information was uncovered about Washington’s clandestine interpretation of the Patriot Act. Most Americans are only aware of the public version of the Bush Administration’s perfidious law passed by Congress in a virtual panic soon after 9/11. But the White House and leaders of Congress and the Justice department have a secret understanding of the Patriot Act’s wider purposes and uses.

The government has just officially confirmed what we’ve long suspected: there are secret Justice Department opinions about the Patriot Act’s Section 215, which allows the government to get secret orders from a special surveillance court (the FISA Court) requiring Internet service providers and other companies to turn over “any tangible things.” Just exactly what the government thinks that phrase means remains to be seen, but there are indications that their take on it is very broad.

Late last night we received the first batch of documents from the government in response to our Freedom of Information Act request for any files on its legal interpretation of Section 215. The release coincided with the latest in a string of strong warnings from two senators about how the government has secretly interpreted the law. According to them both, the interpretation would shock not just ordinary Americans, but even their fellow lawmakers not on the intelligence committees.

Although we’re still reviewing the documents, we’re not holding our breath for any meaningful explanation from the government about its secret take on the Patriot Act.

The Senators involved were not identified, but they were Ron Wyden (D-Ore.) and Mark Udall (D-Colo.), both of whom went public about the secret Patriot Act last May. Wyden declared at the time: “When the American people find out how their government has secretly interpreted the Patriot Act, they will be stunned and they will be angry.” Udall echoed, “Americans would be alarmed if they knew how this law is being carried out.”

The Obama Administration has not sought to mitigate much less abandon the Patriot Act. Indeed, in the 10 ½ years since the act was passed the law has only become stronger, paving the way for other laws assaulting civil liberties and increasing government surveillance.

Just last month, Wired magazine revealed details about how the National Security Agency “is quietly building the largest spy center in the country in Bluffdale, Utah.”

Investigative reporter James Bamford wrote that the NSA established listening posts throughout the U.S. to collect and sift through billions of email messages and phone calls, whether they originate within America or overseas. The Utah surveillance center will contain enormous databases to store all forms of communication collected by the agency. The NSA previously denied domestic spying was taking place.

In his article Bamford quoted a former NSA official who “held his thumb and forefinger close together” and said: “We are that far from a turnkey totalitarian state.”

Commenting on the new guidelines allowing Washington “to retain your private information for five years,” the satirical Ironic Times commented March 26: “If you’re guilty of no crimes, never owed money, don’t have a name similar to that of someone who has been in trouble or owed money and there are absolutely no computer glitches in the government’s ancient computer system during the next five years, then you have nothing to worry about.”

The American people, of course, have a lot to worry about since both ruling political parties are united in favor of deeper penetration into the private lives and political interests of U.S. citizens. The only recourse for the people is much intensified activism on behalf of civil liberties.