Jack A. Smith : Israel and Palestine After the Flotilla / 4 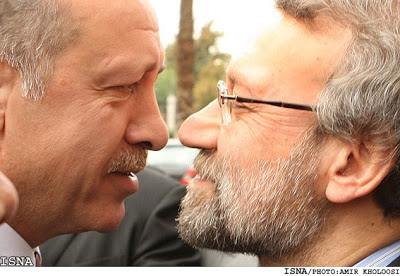 [This is the last in a four-part series in which Jack A. Smith assesses multiple aspects of the situation in Palestine, including the relations between Israel and the U.S., Israel and the Palestine National Authority, the Palestinian split between Fatah and Hamas, the action and inaction of the Arab states, the new role of Turkey, the key importance of Iran, and the future of Washington’s hegemony in the Middle East.]

There are two wild cards in the region — neither of which are Arab — that are capable of complicating the U.S.-Israeli game in the Middle East.

One is Turkey, the militarily strong, largely Westernized, secular democratic republic of nearly 78 million people, with a large Sunni Muslim population. The other is Iran, a largely modernized Islamic republic of just over 67 million people, mostly Shi’ite Muslims. Both are mature societies that have at one time controlled empires — Ottoman and Persian respectively. Both are strategically situated: Turkey between Europe and Asia, Iran between Central Asia and the Middle East.

Turkey, a NATO member and long time close ally of Israel and the United States, had kept to itself for many years. Then in early 2009 the Ankara government of Prime Minister Recep Tayyip Erdogan abruptly stormed onto the regional stage when Turkey sharply condemned Israel’s calculatedly cruel invasion of Gaza.

A few months ago Turkey unexpectedly strode onto the international stage along with partner Brazil, announcing that they had obtained a nuclear fuel swap agreement with Iran that obviated the need for additional U.S.-UN sanctions. They believed, evidently correctly, that they had President Obama’s backing for this independent mission. But when they brought back a deal that was virtually identical to what Obama originally sought, the White House backed off and treated the unofficial intermediaries like unwelcome busybodies.

In our view, what the Obama-Netanyahu cohort really wanted was intensified sanctions, not a nuclear agreement that would remove the pretext for demonizing Iran, probably in preparation for near-future aggression.

Last month — after Israeli commandos cut down nine Turkish members of the humanitarian flotilla — relations between Tel-Aviv and Ankara deteriorated further, and a furious Erdogan withdrew Turkey’s ambassador but did not break diplomatic ties. He called on Israel to apologize for the killings and pay compensation to the nine families involved, but Tel-Aviv has refused, claiming the commandoes were defending themselves.

An interview with Prime Minister Erdogan was aired June 29 on the PBS Charlie Rose program. He called Netanyahu “the biggest barrier to peace,” an obvious truth about which the Obama Administration must be abundantly aware, though publicly silent. Most important, Erdogan also added that Turkey remained “a friend to Israel,” but Ankara soon announced that it would break diplomatic relations with Israel unless Tel-Aviv apologized for the flotilla killings or accepted the conclusion of an international inquiry.

The next day, Foreign Minister Davutoglu met secretly in Zurich with Israeli Trade and Labor Minister Binyamin Ben-Eliezer to discuss reducing tensions. Notice of the meeting was leaked by an Israeli TV station. There was no report about the outcome of the conference. Recognizing that he was intentionally kept in the dark by Netanyahu about this important event where he logically should have presided, Foreign Minister Lieberman publicly excoriated his boss for excluding him.

Netanyahu is under pressure from Washington to seek a reconciliation with Erdogan in order to keep strategic Turkey in Washington’s political enclosure. Loud mouth Lieberman probably would have exacerbated tensions had he met with Davutoglu. Netanyahu needs Lieberman’s Yisrael Beiteinu party in his coalition to remain in office, which is the only reason such a hothead became Foreign Minister. Discussing the latest contretemps, the Jerusalem Post opined July 1 that “it is yet another indicator that Israeli diplomatic policy is dysfunctional.”

At this point, no one really knows the extent of Ankara’s geopolitical ambitions, which may determine how far Turkey will distance itself from Israel, and perhaps the U.S. as well. There’s certainly a lack of dynamic leadership in the Middle East that Turkey, which seems to have good relations with all the Muslim countries, might seek to provide.

If Turkey confines itself to supporting the Palestinians and criticizing Israel, that will have an important regional impact — perhaps sufficient to galvanize the Arab countries to take more action on Gaza’s behalf, to give Tel-Aviv pause, and to induce Washington to finally get serious about ending the colonial status of the Palestinian people.

And if Turkey seeks a larger role in regional affairs beyond the Palestinian issue, perhaps in league with a couple of other regional players, this could possibly alter the balance of power in the Middle East, which is now tilted steeply toward the Washington/Tel-Aviv axis.

And where does the other wild card, Iran, fit into this scenario? Various commentators have speculated that the Islamic republic seeks to dominate the Middle East or that it wants to impose Shi’ite beliefs throughout the region, or that it seeks to destroy Israel, among other absurd speculations.

Any objective appraisal of the conditions confronting Teheran today would show that its first priority and nearly total preoccupation is national security, and its military strategy is defensive, not offensive, as Washington and Tel-Aviv are well aware. Consider this:

For its part, Teheran is continuing to support the Hezbollah Shi’ites in Lebanon and Sunni Hamas in Gaza. Hezbollah — a political movement that leads the second largest electoral coalition in Lebanon — criticizes Tel-Aviv as colonialist but its guerrilla defenders usually fight against Israel when it invades Lebanon. Hezbollah fighters were largely responsible for Israel’s decision to withdraw its military forces in May 2000 after a nearly two-decade occupation of Lebanon, and for a second humiliation of the IDF when it returned in 2006 with guns ablaze.

Hamas is a political organization dedicated to liberating the Palestinian people from colonial domination. It is without heavy weapons, tanks, or planes to employ in its liberation struggle against the IDF so it propelled relatively primitive unguided rockets into Israel and killed up to 10 civilians over the last several years. Israel, of course, killed many thousands of Palestinians during that time.

The U.S. and Israel identify both groups as “terrorist” and Iran as “terrorist” for supporting them. In the opinion of many leftists and numbers of people in the developing (third) world, they are resistance fighters against colonial and imperialist oppression.

The government of President Mahmoud Ahmadinejad denies building nuclear weapons and declares its efforts are directed at producing energy for peaceful purposes, not bombs. Even with all the spy techniques at Washington’s command, there is still no evidence to convict Iran on this charge. Yet Israel — which is said to possess some 200 nuclear weapons in defiance of the NPT — poses as Iran’s intended victim. Iran has not engaged in an aggressive war since the first half of the 1800s (a short-lived incursion over the Afghan border), and is absolutely in no position to do so now.

Neither the U.S. nor Israel is actually worried that Iran will in effect commit national suicide by preparing to attack, or actually attacking, the Jewish State — thus triggering a preemptive offensive or instant mass retaliation from Tel-Aviv, with the U.S. near at hand to help out.

There are two other regional concerns for the U.S. and Israel to think about over the longer term:

The Middle East often looks static, with the Americans ruling the roost, but that’s deceptive. No one knows what is going to happen in the next couple of decades with any of the many possibilities for change that are swirling around the Middle East today, particularly as other world nations rise while the U.S. engages in what appears to be the start of a long decline.

Those bold volunteers who took part in the recent humanitarian flotilla have through their deeds obliged Israel to weaken the blockade of Gaza. That’s an important change. And their efforts focused a bright light on the misdeeds perpetrated upon the Palestinians by Israel and its superpower enabler.

That’s a good start toward further change, and may become a transitional moment that in time results not only in fruitful outcomes for the oppressed Palestinian people, but also for the entire region.