Senator Obama pledged to dismantle the most intrusive aspects of Bush’s surveillance programs. Instead, President Obama secretly allowed those programs to expand. 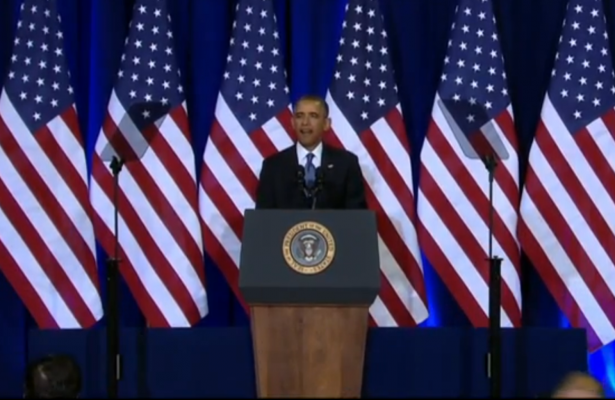 When he ran for the presidency in 2007-08, Sen. Barack Obama pledged to dismantle the most intrusive aspects of President George W. Bush’s post-9/11 surveillance programs. Instead, since taking office in January 2009, President Obama has secretly (until a few months ago) allowed those programs to expand as well as adding a number of his own measures that increasingly jeopardize American civil liberties.

Ever since whistle-blowing NSA contractor Edward Snowden revealed the elephantine extent of the Bush-Obama Surveillance State’s domestic and foreign spying last summer, White House and NSA officials have sought through obfuscation and fabrication to minimize the impact of these disclosures. Public opinion against surveillance measures, however, has been slowly gaining over the months.

Opposition had reached the point when a nationwide speech from Obama was required to ease growing national distrust.

Opposition had reached the point when a nationwide speech from Obama was required to ease growing national distrust. Speaking from the Justice Deptarment January 17, with six large American flags directly behind him to emphasize the importance of national security and patriotism, Obama declared:

The reforms I’m proposing today should give the American people greater confidence that their rights are being protected, even as our intelligence and law enforcement agencies maintain the tools they need to keep us safe.

His effort to convince the American people that the National Security Agency’s mass surveillance apparatus constituted no danger to domestic civil liberties evidently failed, according to a January 17-19 poll conducted by the Pew Research Center/USA Today.

among 1,504 adults, overall approval of the program has declined since last summer, when the story first broke. Today, 40% approve of the government’s collection of telephone and Internet data as part of anti-terrorism efforts, while 53% disapprove. In July, more Americans approved (50%) than disapproved (44%) of the program.

The president should end — not mend — the government’s collection and retention of all law-abiding Americans’ data. When the government collects and stores every American’s phone call data, it is engaging in a textbook example of an “unreasonable search” that violates the constitution.

Most of the Senate and House appear to support the NSA surveillance, either as it now stands or with Obama’s tepid “reforms” intended to deceive and lull Americans concerned about privacy rights. The continued erosion of civil liberties is further assured by the composition of the House and Senate Intelligence Committees, both of which are in the hands of fanatically pro-surveillance chairs — Republican Rep. Mike Rogers, and Democratic Sen. Dianne Feinstein.

A number of liberal Democrats who may know better are not putting up much of a fight, evidently out of party loyalty.

A number of liberal Democrats who may know better are not putting up much of a fight, evidently out of party loyalty. Some Democratic politicians, while praising Obama’s speech defending the NSA, also noted, in effect, “there is more work to be done.”

Among them were two Democrats on the Senate Intelligence Committee who were outspoken against the NSA since Snowden’s act of conscience — Sens. Ron Wyden and Mark Udall, who called Obama’s remarks a major step to protect liberties but urged further alterations.

Many Republican politicians, aside from libertarians in their ranks, seem content with the NSA’s spying apparatus. Republican House Speaker John Boehner sees no need for changes, evidently reflecting the views of most GOP House members.

A most unusual left-right coalition of 125 House members — almost evenly from both parties — is demanding substantial safeguards against intrusive domestic spying, particularly the end of the bulk collection of phone records. They support H.R.3361 – USA Freedom Act, which probably will never pass if allowed to reach the floor.

The bill is sponsored by Rep. Jim Sensenbrenner Jr., a Republican who originally championed and introduced the Patriot Act in 2001. He now opposes as grossly excessive some of the NSA’s usages of the Act. Only two New York State House members joined the co-sponsors — Democrat Jerrold Nadler (10th CD) and Republican Chris Gibson (19th CD).

Some of the main surveillance changes proposed by Obama include the following.

Obama ignored a number of recommendations by the President’s Review Group.

Obama ignored a number of recommendations by the President’s Review Group — some of which were also backed by provisions in the USA Freedom Act bill. Among them was a call to strengthen the Privacy and Civil Liberties Oversight Board, and publishing statistics about the numbers of people who have been surveilled under government spy programs.

Glenn Greenwald, a foremost American critic of government surveillance programs and the main journalistic recipient of Snowden’s material, was sharply critical of the speech in a January 17 article in The Guardian, noting that Obama’s

proposals will do little more than maintain rigidly in place the very bulk surveillance systems that have sparked such controversy and anger…. Ultimately, the radical essence of the NSA — a system of suspicion-less spying aimed at hundreds of millions of people in the U.S. and around the world — will fully endure even if all of Obama’s proposals are adopted. That’s because Obama never hid the real purpose of this process. It is, he and his officials repeatedly acknowledged, ‘to restore public confidence’ in the NSA.

According to analyst and MSNBC host Chris Hayes:

Much of this speech was directed to members of the intelligence community, where [Obama] was like: “I’m your friend, you guys are patriots and you guys are getting beat up, and I hear you.”

In his talk, Obama for the first time mentioned Snowden by name. “Given the fact of an open investigation, I’m not going to dwell on Mr. Snowden’s actions or his motivations,” he said, and then proceeded to do just that:

“If any individual who objects to government policy can take it into their own hands to publicly disclose classified information, then we will not be able to keep our people safe, or conduct foreign policy,” Obama said. “Moreover, the sensational way in which these disclosures have come out has often shed more heat than light, while revealing methods to our adversaries that could impact our operations in ways that we may not fully understand for years to come.”

According to the Times once again:

One of [Obama’s] biggest lapses was his refusal to acknowledge that his entire speech, and all of the important changes he now advocates, would never have happened without the disclosures by Mr. Snowden, who continues to live in exile and under the threat of decades in prison if he returns to this country.

Snowden remains in Russia and is speaking out more publicly.

Snowden remains in Russia and is speaking out more publicly. On January 23 he provided online answers to recent questions he received mostly from Americans. One answer was particularly relevant to the NSA’s bulk collecting of data on many millions of Americans:

“They effectively create ‘permanent records’ of our daily activities, even in the absence of any wrongdoing on our part,” Snowden said.

This enables a capability called “retroactive investigation,” where once you come to the government’s attention, they’ve got a very complete record of your daily activity going back, under current law, often as far as five years. You might not remember where you went to dinner on June 12th 2009, but the government does.

The power these records represent can’t be overstated. In fact, researchers have referred to this sort of data gathering as resulting in “databases of ruin,” where harmful and embarrassing details exist about even the most innocent individuals. The fact that these records are gathered without the government having any reasonable suspicion or probable cause justifying the seizure of data is so divorced from the domain of reason as to be incapable of ever being made lawful at all, and this view was endorsed as recently as today by the federal government’s Privacy and Civil Liberties Oversight board.

Fundamentally, a society in which the pervasive monitoring of the sum of civil activity becomes routine is turning from the traditions of liberty toward what is an inherently illiberal infrastructure of preemptive investigation, a sort of quantified state where the least of actions are measured for propriety. I don’t seek to pass judgment in favor or against such a state in the short time I have here, only to declare that it is not the one we inherited, and should we as a society embrace it, it should be the result of public decision rather than closed conference.