Jack Abramoff Has Been Singin’ the Blues

Frankly, I cannot agree with the suggestion that this weasel deserves leniency, but I’m a hard-nosed radical bastard. We can perhaps remain hopeful that his ‘singing’ will result in a few other deserving crooks professional colleagues also doing a little hard time. 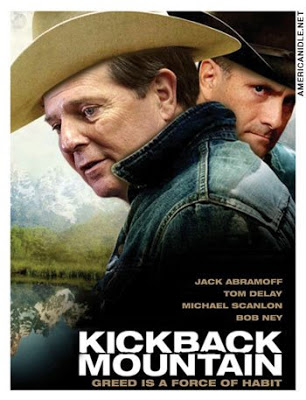 Since his conviction on fraud and conspiracy charges, former lobbyist Jack Abramoff has spent more than 3,000 hours helping more than 100 law enforcement agents in an ongoing federal corruption probe that has implicated “scores of other persons not yet charged,” lawyers said in court filings yesterday.

The extent of Abramoff’s cooperation was described in documents from prosecutors and defense attorneys. They are seeking leniency from the judges who heard the two cases that landed the Republican influence broker in federal prison in Cumberland, Md.

If a federal judge in Washington accepts the recommendation from the Justice Department, Abramoff would serve no more than an additional three years and three months in prison, not accounting for credit for good behavior awarded by the Federal Bureau of Prisons. Abramoff’s attorneys are seeking more leniency, which could have him released from prison by 2010.

In November 2006, Abramoff began serving a sentence of five years and 10 months for fraud in his purchase of a Florida casino cruise line. The Justice Department is seeking a reduction to three years and nine months. Abramoff’s sentencing in a parallel case of tax evasion, fraud and conspiracy to ply public officials with gifts in exchange for official actions was delayed until he had mostly completed his cooperation. The sentencing is set for Sept. 4 before U.S. District Judge Ellen Huvelle.

In the public-corruption case, the Justice Department is asking Huvelle to sentence Abramoff to five years and four months rather than the maximum 11 years and three months he could receive. The sentences in the two cases would be served concurrently. The government also is seeking about $23 million in restitution.

Abramoff attorneys Abbe D. Lowell of Washington and Neal R. Sonnett of Miami noted in a memorandum that in addition to the meeting with FBI and other agents, Abramoff had reviewed more than a half-million documents.

They also noted that Abramoff has helped convict more than a dozen people, in addition to admitting guilt himself, and that his case has prompted reforms that the lawyers said are known as “Abramoff Ethics Rules.” Among those who have pleaded guilty are former congressman Robert W. Ney (R-Ohio), who was released this month after he completed his prison sentence, and J. Steven Griles, former deputy secretary of the interior.

The court papers indicate an extensive ongoing probe by referencing a document that is sealed because it contains grand jury information. Former House majority leader Tom DeLay (R-Tex.) and retiring Rep. John T. Doolittle (R-Calif.), among others, are still under investigation.

One new scheme revealed involves Abramoff and his team of K Street lobbyists padding their billing records — not to cheat clients, most of whom had hired them on retainer — but to bilk additional bonuses out of their firm, Greenberg Traurig, because “padded hours possibly resulted in higher bonuses,” according to a brief signed by William M. Welch II, head of the Justice Department’s public integrity section, and prosecutor Mary Butler.

Abramoff’s attorneys also cited a statement by Noel Hillman, the former chief of the public integrity office and now a federal judge in New Jersey. Hillman said that Mr. Abramoff’s decision to plead guilty and expose the wrongs he and others did was a ‘watershed’ event in addressing public corruption.”

This entry was posted in RagBlog and tagged Criminal Justice, Humor, Lobbyists. Bookmark the permalink.