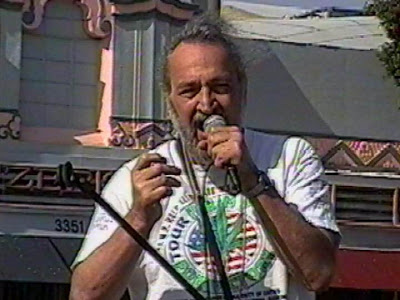 Jack Herer, the father of the U.S. cannabis legalization movement, has been stricken by a massive heart attack. This is seriously upsetting news for Herer’s millions of fans, readers, listeners, and friends — Jack never met a stranger.

A formerly middle-class, straight family man and ad executive, Jack became interested in the economic machinations that led to marijuana prohibition in the U.S. His persistent research led eventually to his seminal work, The Emperor Wears No Clothes: The Authoritative Historical Record of Cannabis and the Conspiracy Against Marijuana.

Emperor has proven to hundreds of thousands of pot smokers and non-users, through historical documentation from government and industry’s own records, that the real reason our recreational substance of choice is illegal is because of the plant’s mild-mannered alter ego, hemp, source of food, fiber, fuel, and medicine since before human history began. Herer shows that hemp became too much of an economic threat to the powerful timber and plastics industries in this country.

Herer was aided for years in his once-quixotic quest by his best friend and runnin’ buddy Edwin “Captain Ed” Adair. The two men pledged to work, if necessary, until they both turned 80 years old to re-legalize what was once America’s moral fiber. Adair didn’t make it to that self-imposed retirement age.

Now U.S. Rep. Barney Frank is introducing the first federal legislative proposal EVER to legalize and regulate marijuana, treating it like alcohol. While victory may still be far from won, Jack Herer’s illness at this historic moment is analogous to Teddy Kennedy’s illness as health care reform was being introduced. Kennedy should have lived long enough to see the fruits of his labor, but he didn’t.

Herer has already fought his way back from one heart attack/stroke some years ago that left him speechless and in a wheelchair for months, and friends fear this new episode may be too much.

Please hold a good thought, light a candle, say a prayer, or whatever floats your boat, for Jack Herer.

And, be sure to read William Martin’s feature in the October issue of Texas Monthly: “Texas Highways: Why the unlikeliest of states — ours — should legalize marijuana.” You can find the entire article here.

Find The Emperor Wears No Clothes: The Authoritative Historical Record of Cannabis and the Conspiracy Against Marijuana by Jack Herer on amazon.com