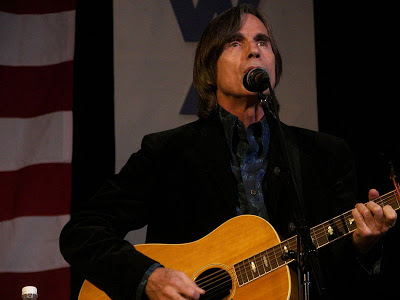 Jackson Browne performs at concert for John Edwards this year.

Jackson Browne is suing John McCain for using the song “Running on Empty” in a campaign ad — and the veteran rocker is also calling the candidate a great pretender when it comes to standing up for constitutional rights.

Browne, one of rock music’s most famous activists for liberal causes, is “incensed” that the presumptive Republican candidate for president has been using Browne’s signature 1977 song “Running on Empty” in campaign commercials, according to the singer-songwriter’s attorney. Browne filed a copyright infringement lawsuit against both McCain and the Republican National Committee on Thursday in U.S. District Court in Los Angeles seeking a permanent injunction prohibiting the use of the forlorn arena anthem or any other Browne compositions, as well as damages.

They may be suing the wrong people. McCain spokesman Brian Rogers tells our colleague Seema Mehta in Colorado that the ad in question is not a McCain campaign ad but one put together by the Ohio Republican Party.

But Browne’s attorney, Lawrence Y. Iser, says they have the right defendants. “We have sued the Ohio Republican Party as well, and we have been informed and believe that McCain and his campaign were well aware of the ad. We are also informed and believe that the ad was broadcast on television in Ohio and Pennsylvania…. The fact that it appears on the Internet means it also reaches an audience well beyond those states.”

Iser said the lawsuit “is not politically motivated. It’s a copyright infringement lawsuit, pure and simple, but the fact that Sen. McCain has used this song in a hit-piece on Barack Obama is anathema to Jackson.”

Iser claims the McCain campaign has a track record of using music without permission.

“They used a John Mellencamp song until he made them stop and he used an ABBA song and a Frankie Valli song — it’s ridiculous and it’s setting a terrible example,” Iser said. “It’s shocking that they don’t even attempt to get permission. There’s no copyright difference between using a song to sell cars or by people running for president. The music industry continues to suffer due to lack of respect for intellectual property rights, and a candidate for president has a duty to lead by example and ensuring their campaign does as well. The copyright protections are derived from the Constitution itself.”

In the commercial in question, Barack Obama is mocked for suggesting that the country conserve gas through proper tire inflation. The suit claims that use of the song violates the Lanham Act by falsely implying that Browne is associated with or endorses the McCain candidacy. The suit also claims the commercial violates Browne’s right of publicity under California law.

Browne declined comment through Iser. The 59-year-old singer is one of the most politically immersed artists of his generation. He performed at the No Nukes concerts in 1979 and, in the years after, his albums shifted strongly toward political messaging, such as his 1986 album, “Lives in the Balance,” and its harsh appraisal of the Ronald Reagan years.

There have been a number of instances through the years when performers have been angered by the use of their music by a politician. Bruce Springsteen, another No Nukes performer, cried foul when Reagan, running for re-election, invoked the patriotic imagery of “Born in the U.S.A.,” a song that is actually a dark essay on the fractured American dream.

Our colleague Dan Morain, who spends most of his time tracking campaign money, passes along some of Browne’s contribution history. No surprise: Browne likes Democrats. Morain reports that Browne, a modest campaign donor over the years, gave Obama $2,000 shortly after he won his Senate seat in 2004 and another $2,300 in March. Browne also has given about $5,500 to MoveOn.org, $5,266 to Rep. Lois Capps of Santa Barbara. And he’s sent $1,000 to Al Franken, the Democratic Senate candidate in Minnesota, $500 to Ned Lamont for his 2006 run for Joe Lieberman’s Senate seat in Connecticut.

In the 2000 election, though, he went with Ralph Nader, giving the once and future presidential contender $2,000 for a race many Democrats still think cost Al Gore the White House.

Thanks to Jon Ford / The Rag Blog