James McEnteer : On the Lean Streets of Quito 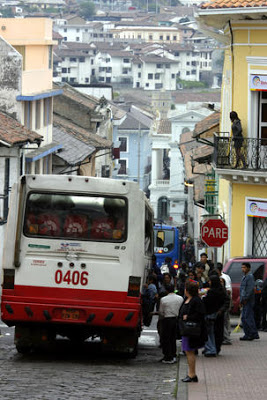 A man dressed as a circus clown boards a bus selling packs of magic candy, two for a dollar.

QUITO, Ecuador — In Quito you’re either on the bus or off the bus and many are on it. Ecuador’s long, narrow capital city lies between rows of volcanic Andean peaks. Though the urban area stretches nearly 50 kilometers from north to south, it’s possible to traverse most of that distance for 25 cents (12 cents for children and seniors), transferring from one city bus to another. Of course this cheap, reliable public transportation is very popular.

Quito bus riders are also captive audiences for all sorts of sales pitches. Hawkers may come on peddling medicines, for instance. They will make a brief introduction, apologizing for the intrusion, as they move swiftly down the aisle handing out samples of their wares to anyone who will accept them. They launch directly into the long list of benefits their miracle pill or powder can bestow, the many ailments it can cure or prevent.

Or someone might chant the praises of a cookbook full of many fabulous recipes. The salesperson may run through some or all of those recipes, a litany that sounds something like an auction, to entice customers to buy. This prodigious feat of memory may provoke hunger as the bus passengers listen to the long list of meat and fish dishes, or the many desserts one can learn to cook from the proffered volume.

More entertainingly, sales folk pitching CDs pass out their samples and then play excerpts on a small computer or a portable CD player they wear around their necks to keep their hands free to pass out their products or collect their payments.

Whether the products on offer are medicines, cookbooks or music, most passengers accept the chance to hold them in their hands while they listen to the pitch. Inevitably, no matter how much the salesperson claims their product is worth, they end up asking one dollar for it, just to keep things simple. The U.S. dollar is the largest common coin in circulation here.

A man dressed as a circus clown boards a bus selling packs of magic candy, two for a dollar. He says if you eat one, you’ll be able to speak English. Eat two, and you can speak French. Three, and you’ll be fluent in Quichua (a local indigenous language). But if you eat four you’ll turn mute.

As in any profession, some bus vendors excel at what they do, while others are hopeless, rattling on in a rote, unconvincing singsong. Or mumbling their inaudible spiel beneath the drone of the bus engine and the cacophony of city traffic. Some vendors are too shy for their chosen profession. They should probably stand passively with their wares on a street corner, as many do in this lemonade stand economy.

In some cases, a bus sales pitch has little to do with the product. One man who hawks packets of plastic garbage bags spends most of his time describing the community of orphans that stands to benefit from his sales. Of course, what can you say about a garbage bag? That it can hold all the stuff you could buy on a bus?

Blind and crippled vendors board the busses too, sometimes with children or other helpers, to throw themselves on the mercy of the passengers, urging them to buy candy or simply to give them donations. Handicapped vendors wear official government name tags which certify their afflictions as genuine. Considering the meager gleanings of the disabled bus vendors, it is a wonder that their helpers make enough to get by.

Two or three strapping young men may start rapping along with their recorded music and breaking out dance moves down the center aisle. I tend to donate to these guys, whether or not they’re any good, to encourage their show business aspirations, so they don’t have to fall back on crime, mugging pedestrians on the street if their bus performance gigs don’t pan out.

Performers especially, but all vendors, must time their bus sales to avoid the crush of standing riders during peak commuting hours. That makes for a short, intense work day, hopping on and off one bus after another, every 15 minutes or so after the early morning crowds ease off and before the late afternoon commute begins. Is there a training school for bus vendors? Maybe there should be.

Annoying, amusing, always on the go, Quito bus vendors offer random interactive diversion for passengers shuttling from here to there at bargain rates, whether or not you buy what they’re selling. They make online pop-up ads look slick and remote by comparison, and way two-dimensional.

1 Response to James McEnteer : On the Lean Streets of Quito