As Washington Redskin fans debate the political correctness of their team name, Indians fans and detractors grapple with the propriety of the grinning visage of Chief Wahoo. 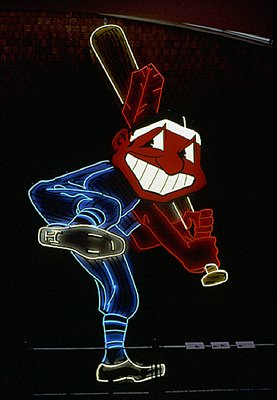 The grinning visage of Chief Wahoo. Image from Cleveland Frowns.

It’s crazy time again in Cleveland. Lake Erie has thawed. The snow has finally melted. Baseball season is underway. Once again the perennial argument over the Cleveland Indians team logo is heating up.

As Washington Redskin fans debate the political correctness of their team name, Indians fans and detractors grapple with the propriety of the grinning visage of Chief Wahoo, official face of the Indians.

It’s beyond odd that Indians fans are having this debate in 2014. And getting emotional about whether or not the Chief Wahoo logo is or is not offensive. If history did not exist — that is, if Europeans had not flooded into North America killing and dispossessing every last indigenous person in their way, men women and children — then we might be able to take this debate seriously.

But they did. So Chief Wahoo is the smiling face of genocide and that grin on his face very much resembles the skeletal smile of the Mexican calavera, a satirical dig at folks who take themselves so very seriously when we all know where we’re all headed. Of course as many people like to deny the future as they do the past.

Would German soccer fans adopt a team logo based on a grinning Jew? Maybe call him Der Judenhauptling, with long Hasidic curls and a smile brighter than the ovens of Auschwitz, as the face of a survivor — like Chief Wahoo — whose triumph is symbolic if not actual. They could also refer to their team as “The Tribe.”

We get to romanticize the victims of our rapacity once they are safely annihilated.

We get to romanticize the victims of our rapacity once they are safely annihilated. Or reduce them to harmless caricatures. Why not just call the Cleveland baseball team “The Noble Savages”? Their logo could be a naked man with a spear.

Might it be more appropriate to honor the winners of the real estate wars, the gun-toting buffalo hunters and massacre makers who “won the West”? A big white guy with a rifle and a grin (with maybe a couple of teeth missing) and wide-brimmed hat pushed back on his head: Joe Slaughter, logo of The Well-Poisoners or The Scarlet Fever Blanket Bringers. Joe Slaughter would wipe the grins off the faces of the Cincinnati Reds or Washington Redskins. No treaties honored with primitives. Got it?

Some sarcastic fans have suggested that the Indians could refer to natives of the Indian subcontinent, in which case the team totem could be Vishnu. But baseball is as foreign to South Asia as Hinduism is to the American Midwest.

But maybe most appropriate might be to change Chief Wahoo to Chief Yahoo, in the sense that Jonathan Swift wrote about in his fantastic novel Gulliver’s Travels. Swift’s voyager, Lemuel Gulliver, found the Yahoos, creatures resembling human beings, to be obsessed with the pretty stones they found by digging in mud. Swift intended them to be satires of the distasteful materialism and mindless elitism he saw in Britain. Yahoo has come to mean “a crude, brutish or obscenely coarse person.”

Chief Yahoo could personify a team called The Rabid Capitalists or The Investment Bankers, names to strike fear in the hearts of all but the most hardened One Percenters.