James Retherford :
Born 50 years ago, ‘The Spectator’ was a bright light in Klan-infested southern Indiana

This controversial alt-underground weekly explored the fertile meeting ground of art and activism. 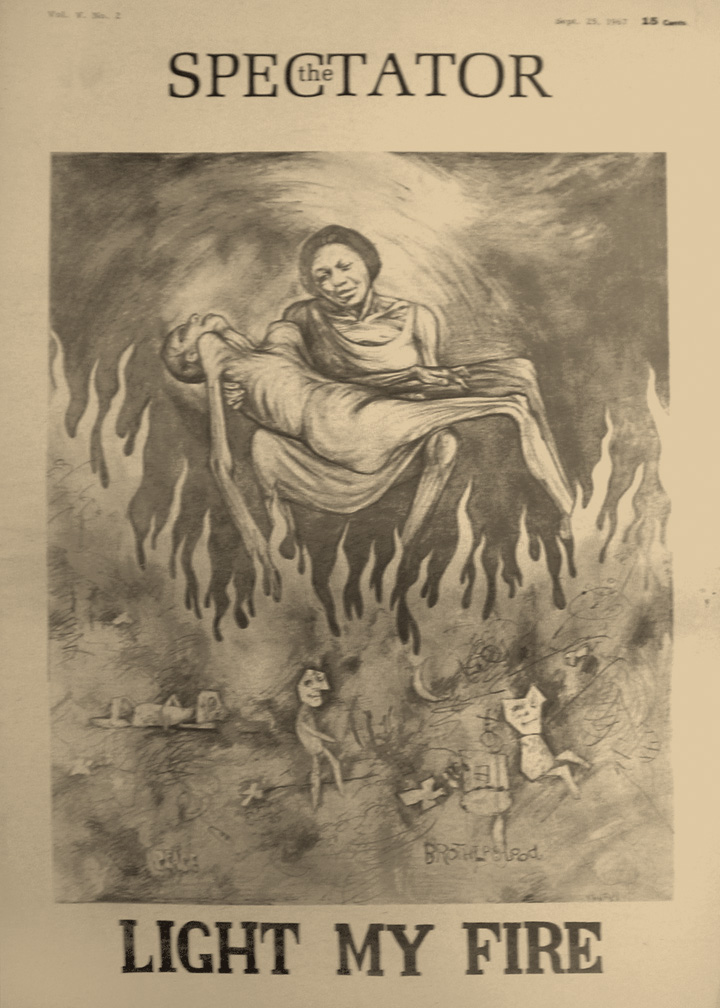 The Spectator, Sept. 25, 1967. Cover art by Wendel Field. The paper was then edited by The Rag Blog‘s Jim Retherford.

This is the story of an extraordinary little southern Indiana newspaper which captured journalistic respect and intellectual influence far beyond its geographical and budgetary limitations and then, five years later, slipped off into southern Indiana’s cold winter mist.

Fifty years ago on Friday, February 5, Indiana University’s drivel-driven “official” daily student newspaper, The Indiana Daily Student, got some serious competition. A group of students, fed up with the lack of issue-oriented reporting in the IDS and reports of outright censorship by the aging, authoritarian Journalism Department chairman, launched a new weekly tabloid under the auspices of the English Department.

Named as a literary nod to the famous early 18th century English periodical published by Joseph Addison and Richard Steele, The Spectator promised “a responsible newspaper of high quality that gives in-depth analysis of campus and local events and reviews of cultural events by qualified critics.” Led by a group of liberal arts graduate students, headed by the late Robb Baker, I was one of the undergrads who played a part in bringing the publication into being.

‘The Spectator’ was a vehicle of Hoosier student activism and a target of heavy-handed repression.

The Spectator’s story of survival — a small bright light from the Klan-infested backwoods of southern Indiana — and its role both as a vehicle of Hoosier student activism and as a target of heavy-handed university, state, and federal government repression, is an extraordinary one.

At its best, during the psychedelic early years of the underground press, The Spectator followed its own path, committed to integrity, intelligence, and a fierce will to survive. Today it needs to be remembered for its audacity to overcome enormous obstacles and to push back into the face of high-and-mighty mid-20th century American imperialism.

In the beginning, The Spectator’s conscientious — and, let me say, balanced — coverage of student affairs, including the ongoing struggle over women’s hours and the university’s banning of the W.E.B. Du Bois Club and the Sexual Freedom League, quickly got the paper in hot water with the administration. The oligarchs weren’t used to having students challenge their decisions — even less their authority to make such decisions. These were arguably the last days of en loco parentis, the idea that the university should act in place of a parent in controlling young adult behavior. To many students in 1965-66, the university had become a loco/crazy parent.

Indiana University administrators wanted
to pull the plug on the paper.

By the end of the 1965-66 school year, I.U. administrators wanted to pull the plug on The Spectator … or, at the very least, install a compliant editor-in-chief. The administration’s pick for the job, however, was roundly rejected by staff members who met in early September 1966, to move ahead with The Spectator’s second semester. Instead, I was asked to assume the editorship. 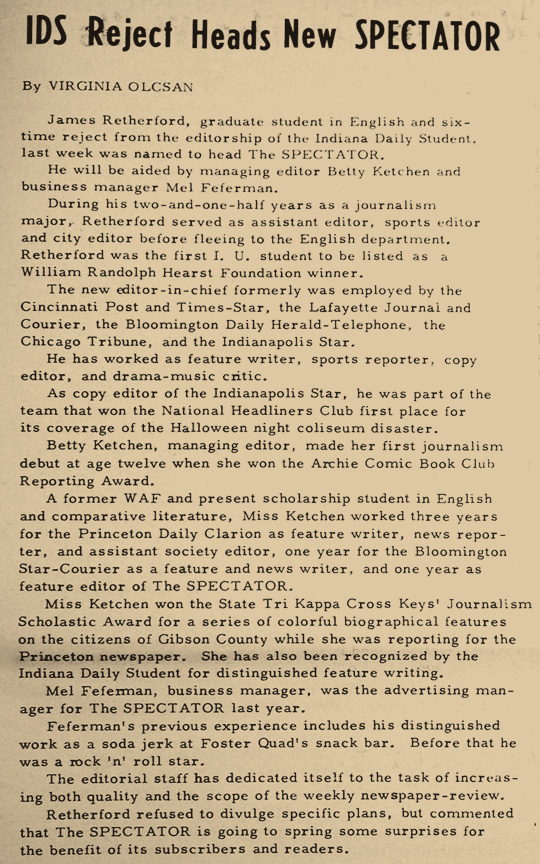 Article from the Oct. 3, 1966 issue of The Spectator. Note from Retherford: the “six-time reject” reference was a joke. “I didn’t stick around the Daily Student long enough to get rejected even once,” he said.

Under my editorship the paper began to look at the university’s relationship with the outside world, which at the time meant examination of institutional racism, ties with war profiteers, and especially the role of important I.U. academicians with the military and intelligence operation of the Vietnam War.

These were the early days of New Left and student power movements in the heartland, and Spectator political reporters stood tall on the front lines, countering every official rationalization or “big lie” with carefully reasoned and researched answers.

On the cultural front, the newspaper’s writers explored the fertile meeting ground of art and activism with some of the best, most original writing in the country during the decade.

‘The Spectator’ was dedicated to publishing groundbreaking original literary works.

But where The Spectator really stood apart from the rest of the underground press was its dedication to publishing groundbreaking original literary works, including the first North American publication of Ed Dorn’s epic “North Atlantic Turbine,” new poetry by Charles Bukowski and Clayton Eschleman, pop poetry by Anselm Hollo, and even a complete play, later produced Off-Off-Broadway.

Paul Buhle, then editor of Radical America, called The Spectator “the most intellectually provocative” of the emerging alternative publications.

I was no firebomb-throwing Bolshevik when I became Spectator editor, but the university administration’s response was nonetheless chilling. First our student financial account with about $1,000 in first semester profits was frozen, leaving us without funds to publish. Then the university moved to suspend The Spectator’s student publication charter and evict us from the rent-free slum quarters we shared with rats.

A drive-by gunman shot a bullet into my home.

When that didn’t work, we were banned from campus newspaper sales and barred from obtaining advertising for university-sponsored cultural events. A drive-by gunman shot a bullet into my home. Then the Federal Bureau of Investigation tried to start its own “underground” newspaper, a clunker called the Armageddon News. It was so bad that J. Edgar Hoover wrote a scathing memo to the FBI Indianapolis field office.

Finally, in late 1967, university, state, and federal agencies, in a concerted one-two-three punch, colluded to use every available legal (and extra-legal) weapon at their disposal in order to bury The Spectator once and for all. In rapid order, (1) our campus office was ransacked and files destroyed by an axe-wielding I.U. vice president/dean of facilities, (2) our “civil libertarian” printer was intimidated into dropping us, and (3) I was COINTELPROed with three spurious federal Selective Service indictments (behind which, I would soon discover, lurked a web of allegations of subversion, sedition, and downright inappropriate behavior). 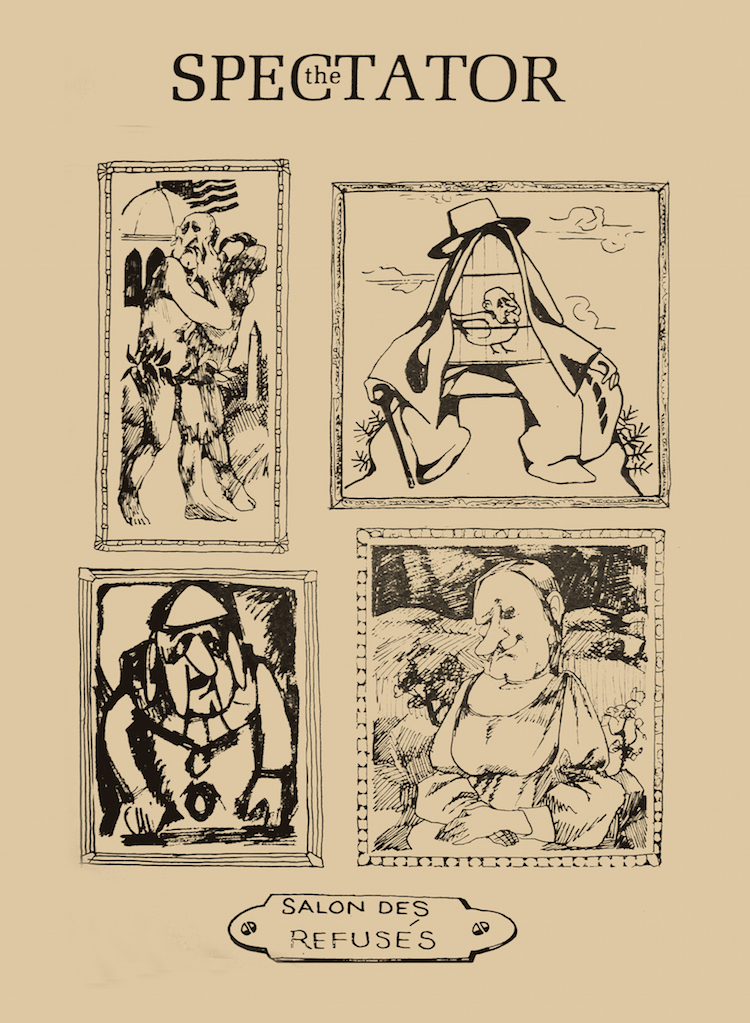 Though the next few months would be crazy, The Spectator liberated an apartment house basement, found another printer, and fought back. However, throughout the spring, it seemed every time I found a web offset company willing to print The Spectator, a couple weeks later the owner would back out, citing pressure from Indiana University and/or the FBI. Our weekly road trips became longer and longer. By the end of the spring 1968 semester, a fellow staffer and I spent two sleepless days running a reformatted 56-page issue on the Southern Patriot’s small multilith press in Louisville.

On the legal front, I appeared for trial only to discover that Attorney General Ramsey Clark had previously ordered the U.S. attorney not to pursue the case against me. Then the judge ignored (as the appeals court would later note) the absence of Justice Department authorization and ordered the trial to proceed anyway. I was found guilty and sentenced to six years in federal penitentiary. My appeal was rejected on clerical technicality, and I was jailed for three months waiting for the district court to reaffirm my right to appeal. (NOTE: A year later a three-judge panel of the Seventh Circuit Court of Appeals overturned the convictions and pointedly criticized both the prosecutor and trial judge.)

‘The Spectator’ not only survived but hit a whole new level of energy and audacity.

Meanwhile, The Spectator not only survived but hit a whole new level of energy and audacity, organizing film showings, poetry readings, happenings, jazz concerts, and huge outdoor rock events, as well as continuing to cover the political and cultural beat on campus and in the community. I was determined that this would be my going-away party, one way or the other.

POSTSCRIPT: The government’s action against me succeeded in one regard: after my trial in June 1968, I stepped down as Spectator editor. Michael King, who since has served as Texas Observer editor and Austin Chronicle news editor, was my experienced, very tough-minded successor, and he assembled staff every bit as fierce as the people who worked at my side for two years.

I became editor-in-exile in NYC where my new attorney Leonard Boudin was preparing my appeal.

The rest of the story is someone else’s to tell. From my East Coast vantage point, student activism in sleepy little Bloomington seemed to hit warp speed — mass demonstrations, sit-ins, boycotts, union support activities, police violence, and a KKK firebombing of a African-American-owned bookstore, to skim over the highlights.

The Spectator covered it all from the front lines. 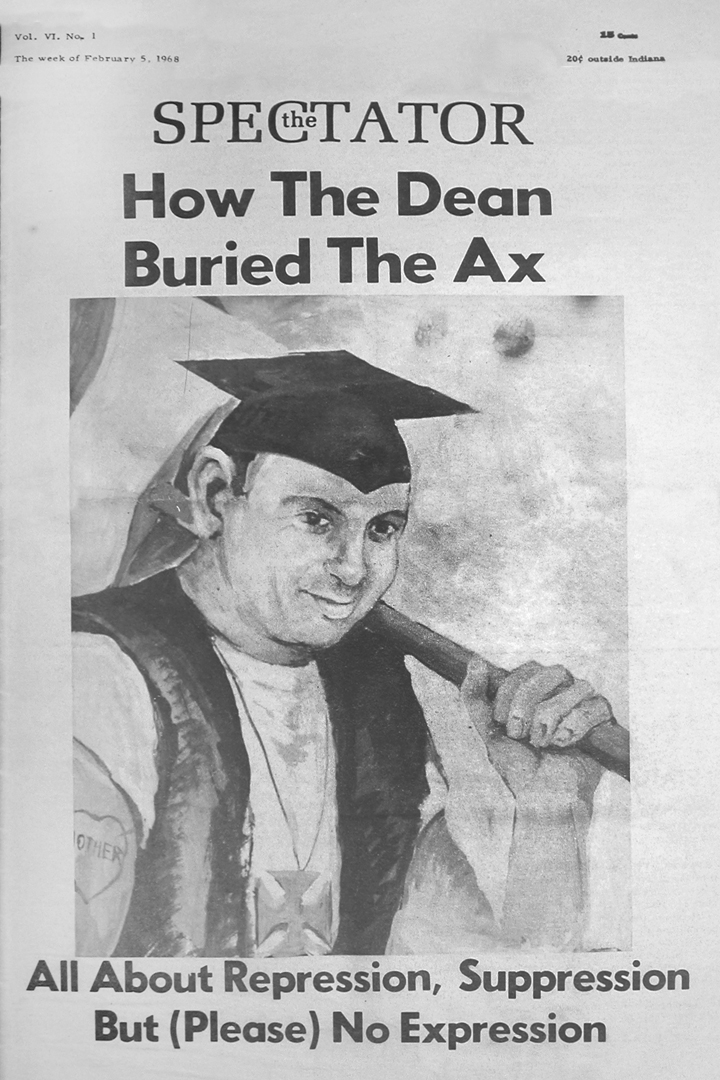 As The Spectator and other pioneering ’60s underground papers are hitting the mid-century mark, The Rag, Austin’s groundbreaking “little paper that could” — reborn in the digital era as The Rag Blog and Rag Radio — will be throwing a large-scale staff reunion and public celebration this October 14-16, featuring the slogan, “The Rag: 50 Years and Still Raising Hell!”

Also read Ken Wachsberger’s Rag Blog reports on the fiftieth anniversary celebrations of  the Berkeley Barb and the Fifth Estate.

[Rag Blog contributing editor and designer James Retherford is an Austin-based writer, graphic designer, and political activist. Jim, who was active in SDS, the Yippies, and political guerrilla theater, was a founder and editor of The Spectator in Bloomington, Indiana, in 1966, and was the ghost writer for Jerry Rubin’s iconic book, Do It!]

Read more articles by and about James Retherford on The Rag Blog.

5 Responses to James Retherford :
Born 50 years ago, ‘The Spectator’ was a bright light in Klan-infested southern Indiana