James Retherford : The Story of Dada 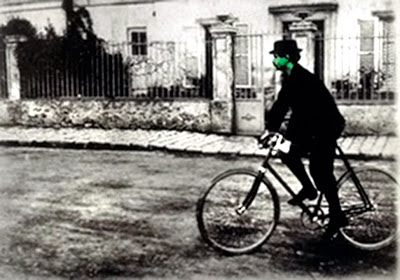 Alfred Jarry on absinthe.
The Story of Dada (Part One)

Inspired by the edgy transubstantiation of primitive energy and ontological nullity in Dada’s impromptu poetic style, [Hugo] Ball tried to emulate it — but without success.

Born in 1871 amidst the revolutionary fervor of the Paris Commune, poet provocateur and pioneer psychedelic explorer D. D. Dada was the love child of deceased visionary author Comte de Lautréamont and Louise (“the Red Virgin”) Michel, conceived on Lautréamont’s death bed in a selfless act of mercy fuck by Paris’ notorious advocate of chastity and revolutionary socialism.

His father dead at an early age and his unchastened but no-longer chaste warrior mother imprisoned and then exiled after the fall of the Commune, young Dada was nurtured in the back alleys of Paris, educated in worldly (and fleshly) ways by the demi-mondes of Montmartre. According to all contemporary accounts, he was a prolific student with a voracious appetite for the subject matter.

When Dada was in his teens, he had the shocking experience of being run over by a green man standing on the handlebars of a speeding bicycle; the resulting broken pelvis and psychological damage would cause Dada to walk with a limp and talk with a pronounced stutter.

As absurdist fate would have it, the wreckless green bicyclist turned out to be absinthe-fueled Alfred Jarry, who took the injured Dada into his parent’s home to heal and then gave him a job as an apprentice in the family’s pillow-making factory.

Dada proved to be a very imaginative pillow maker and began to make large-scale stuffed creatures and phantasmagorical characters. One such creation was a big green life-sized stuffed doll named King Ubu. Jarry — who was imbibing so much absinthe at the time that his own skin had taken on a permanent green hue — adapted the bright green pillow as his imaginary soul mate and then wrote a seminal play about the big fellow. 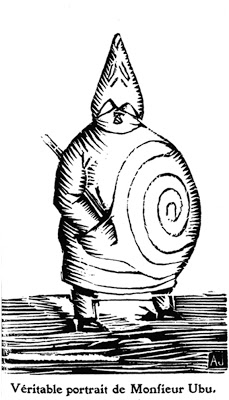 Dada would influence Jarry in other ways as well. Growing up within earshot of the fashionable and intellectual coterie of Montmartre and St. Germaine cafe society, he developed an extraordinarily inquisitive and sophisticated mind regarding matters of scientific and philosophical consequence. One biographer credits Jarry’s own excursion into the realm of pataphysics to a potent mix of Hegel — that is, Dada’s impassioned but speech-impediment-challenged discourse thereof — and too much absinthe.

Forced to flee his beloved Paris during the war years, Dada found his way to Zurich in 1915 where he got a job helping Hugo Ball and Emmy Hennings renovate a backroom space into a cultural nexus called Cabaret Voltaire.

One day Ball was standing nearby when Dada, frustrated while trying to install a urinal in the women’s bathroom, began to use his wrench to beat out strange polyrhythms on the metal pipes. As he pounded on the pipe, he also began to utter what sounded like an incantation of nonsensical rhythmic stuttering sounds.

Inspired by the edgy transubstantiation of primitive energy and ontological nullity in Dada’s impromptu poetic style, Ball tried to emulate it — but without success. Soon thereafter he asked the erstwhile plumber/pillow artiste to become the club’s official bathroom cleaner and his own unofficial ghost writer.

Soon Ball and Hennings were joined by other émigré artist/conspirators — Marcel Janco, Richard Huelsenbeck, Jean (Hans) Arp, and Tristan Tzara — and Cabaret Voltaire became the community center for a new anti-fascist peace movement. But when the organizers gathered in the cabaret to brainstorm a name for their new political-cultural tendency, the formidable male egos immediately sprang to full turgidity, creating such a rift that the little ship of the absurd appeared ready to capsize before it cleared the slip.

Amidst the ensuing cacophonous shouting match, Dada had climbed up on a ladder to hang theatre lights and could be heard muttering to himself, banging his hammer as emphasis. As the group argued, Dada chanted and hammered. The louder the argument, the louder he chanted and hammered, slowing building in rhythmic intensity. What he chanted went something like this:

Textile artist Sophie Tauber had been quiet throughout the loud debate among the men. Now she spoke up. Reminding the ego-embattled males in the group that they were, after all, launching a class-conscious albeit absurdist revolutionary anti-art movement, she suggested that it would be profoundly appropriate to name the organization after this non-aspiring, ego-free man who scrubbed the toilets, hung the lights that would shine upon them, and so brilliantly articulated the heart and soul of their philosophy.

Even Tzara was forced to agree with her flawless anti-logic.

[James Retherford is an editor and designer at The Rag Blog and a director of the New Journalism Project. His attempts to link his lineage to D.D. Dada have been inconclusive. His new blog is Dancing with Dada.] 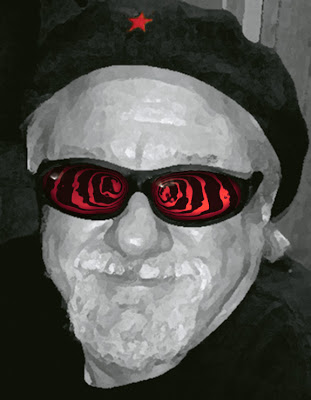 The author’s Yippie lineage has been confirmed.
The Rag Blog

4 Responses to James Retherford : The Story of Dada