James Retherford : Who Watches the Watchman? 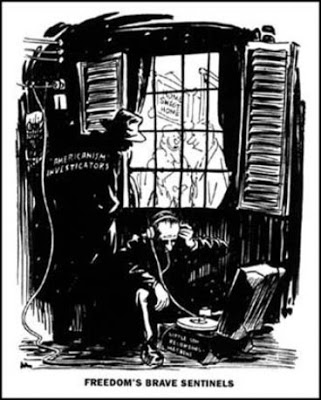 Introduction:
Who watches the watchman?

COINTELPRO and the federal government’s clandestine attack on the U.S. constitution

I wonder how many Americans actually remember or are even aware of the excesses of government intrusion during the Vietnam era — the FBI’s COINTELPRO, the CIA’s Operation Chaos (later known as “Family Jewels”), the NSA’s Operation Minaret, and U.S. Army spying on civilians, as exposed by Christopher Pyle in 1970? All of these were domestic operations carried out against American citizens within the borders of the United States.

And all were ILLEGAL, prohibited by the law of the time. The “inconvenience” of mere law and legalisms, however, didn’t stop local law enforcement authorities and the various intelligence agencies during the administrations of Lyndon Johnson and especially Richard Nixon from mobilizing and carrying out illegal wiretaps, break-ins, mail tampering, frame-ups, character assassinations, and, in at least one stunning incident, the real assassination of a charismatic young African-American activist leader, Fred Hampton, by FBI and Chicago police.

A measure of our government’s attack on the Bill of Rights and rule of law was documented by the Church Commission in 1975-76. The commission’s findings were published in 14 volumes. Very thick volumes filled with chilling specifics.

I first got to know FBI operating procedures “up close and personal” when in 1967-68 I was indicted on three fabricated federal charges, tried in a “kangaroo” court without due process, convicted, and sentenced to six years in federal prison. My REAL “crime”: I was co-founder and editor of one of the earliest underground newspapers in the United States, a small, but apparently very effective weekly published in a part of the American heartland where anti-war and pro-civil rights/social justice views were considered subversive, and the First Amendment only existed for those who proudly displayed their “Bomb ‘Em Back to the Stone Age” bumper stickers.

My conviction was literally thrown out of the federal appeals court in 1969; the three-judge panel scolded the U.S. attorney for prosecutorial misconduct during the hearing, then also added a reprimand to the trial judge in a strongly worded written decision.

Yet the damage to me already had been achieved when the government imprisoned me during the beginning of the appeal process, and I was unable to continue as editor of the underground newspaper I helped start.

On the other hand, what I assume to be the government’s main objective — to silence a small dissident weekly newspaper — failed when a courageous young man named Mike King – the same Michael King who currently is news editor of the Austin Chronicle – agreed to take over the editorship. Because of the tenacity and extraordinary dedication of a battle-tested staff, our little newspaper survived COINTELPRO’s best shot and continued to publish its progressive message week after week, despite ongoing and relentless attacks from the right. Eventually the everyday folks of the heartland came to reject the government’s tone-deaf policies and began to embrace the belief that racial injustice and the Vietnam War did not represent either American values or national interests.

My next experience with FBI investigative techniques came a couple years later in New York City when federal agents removed my next-door neighbor from his apartment and installed themselves and a battery of listening devices aimed at my apartment. I discovered the bugging operation when I became suspicious about the trench coats and “suits” moving in and out of my neighbor’s sixth-floor tenement walk-up apartment.

One night I heard a commotion in the hallway outside the two apartments and peeked out the front door peep hole. I saw several men, all dressed in London Fog, leaving the apartment. So I decided to do my own investigation. Crawling out on the fire escape, I looked in through the neighbor’s living room window. Through a gap in the curtains, I could see glowing VU meters and moving tape reels lit up in the semi-darkness. I found out later there was no warrant for this eavesdropping operation.

There was, however, a subpoena delivered a few days later to my door by a contingent of federal marshals backed by a SWAT team in body armor and armed with automatic weapons. Together with five friends and compatriots from New York and California, I had been summoned to the Nixon administration’s nationwide “witch hunt”: the Guy Goodwin grand juries. In addition to the New York inquiry, other Goodwin grand juries convened in Detroit, Phoenix, San Diego, and Seattle. All shut down after witnesses followed our lead in New York. We not only refused to cooperate; we were openly contemptuous of the process.

I showed up to testify wearing a King Kong costume — hey, I wanted to help Assistant AG Goodwin find those urban gorillas. Goodwin — and ultimately all government prosecutorial “expeditions” — depend on intimidation to obtain testimony about the protest movement and the underground. Goodwin was helpless when that tactic failed, and he was left only with whatever information he had obtained by using illegal means.

Very simply, here’s what I have learned from my experiences with the police state: Anyone who really believes that government can be expected to police its own activities is at best naive, at worst delusional. Because of Bush-era acts and executive orders, activities which in the mid-70s were clearly unlawful now have become lawful. With all of these well-tested tools now LEGALLY available, do not think for a moment that Homeland Security and intelligence agency snoops and spooks will neglect anything in their black bag of tricks to carry out their objective — i.e., to maintain and protect the authority (money and power) of government and its corporate allies.

The upcoming series was originally researched and written six years ago and describes in chilling detail how the U.S. government surreptitiously conspired to maintain lock-down social control of American citizens in the period up to and including post-Watergate. I’m not talking about the “fairy tale” of American democracy as taught in high school civics classes. I’m talking about the real U.S. government, i.e., the executives and their highly placed lobbyists representing the nation’s wealthiest, most powerful global corporations (oil and energy, defense, agriculture, telecommunications and information infrastructure, pharmaceuticals, media, the prison industry, etc.), working together with neo-conservative and neo-liberal think tanks, their business partners (Democrat and Republican) in the Administration and the Congress, and their enforcers at the Pentagon and the spy agencies. The single-minded goal of this real U.S. government is to expand and defend domestic and global markets by any means necessary.

A century of paradigm development by the American ruling class produced another success, one never fully realized in previous protofascist regimes: under the control of a new generation of corporate-savvy academicians, the U.S. educational system systematically gutted critical thinking from school curricula from diaper to diploma and began turning out generations of Americans mesmerized by the spectacle of easy credit and conspicuous consumption.

Meanwhile, for those who skipped class, didn’t do their homework, or just plain don’t fit into the program, the real government now has a new, improved police state, one in which the spooks and spies are no longer fettered by law, privacy concerns, habeas corpus, and that nuisance document called the Bill of Rights. In this brave new world order, those things are no longer considered USA-PATRIOTic. Fear replaced Freedom on the new post-9/11 class schedule. Fear works just fine as a social control.

It’s a very good question for us here today in the USA.

Coming next: “Who Watches the Watchman? COINTELPRO and the Federal Government’s Clandestine Attack on the U.S. Constitution, Part I.“

[James Retherford was a founder and editor of The Spectator in Bloomington, Indiana, in 1966. He is a director of the New Journalism Project, the nonprofit organization that publishes The Rag Blog.]

1 Response to James Retherford : Who Watches the Watchman?