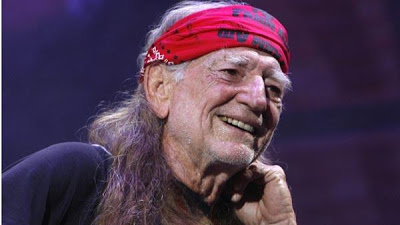 Little did Willie Nelson know when he recorded “Crazy” years ago just how crazy it would become for our cherished family farmers in America.

Nelson, president of Farm Aid, recently called for the national Occupy movement to declare an “Occupy the Food System” action. Nelson said that, “Corporate control of our food system has led to the loss of millions of family farmers, destruction of our soil,” and much more.

The lawsuit addresses the bizarre and shocking issue of Monsanto’s harassing and threatening organic farmers with lawsuits for “patent infringement” if any organic farmer ends up with any trace amount of GM seeds on their organic farmland.

Judge Naomi Buckwald heard the oral arguments on Monsanto’s “motion to dismiss,” and the legal team from Public Patent Foundation represented the rights of American organic farmers against Monsanto, maker of GM seeds (as well as Agent Orange, dioxin, etc.).

After hearing the arguments, Judge Buckwald stated that on March 31 she will hand down her decision on whether the lawsuit will move forward to trial.

Of course, the organic farmers don’t want anything to do with that ol’ contaminated GM seed in the first place. In fact, that is why they are certified organic farmers. Hello? But now they have to worry about getting sued by the very monster they abhor, and even have to spend extra money and land (for buffers which only sometimes deter the contaminated seed from being swept by the wind into their crop land).

At this point, they are even having to resort to not growing at all the following organic plants: soybeans, corn, cotton, sugar beets, and canola… just to protect themselves from having any (unwanted) plant that Monsanto could possibly sue them over.

The farmers are suffering the threat of possible loss of “right livelihood.” They are creating good jobs for Americans, and supplying our purest foods. These organic farmers are bringing Americans healthy food so we can be a healthy nation, instead of the undernourished and obese kids and adults that President Obama worries so much about us becoming. 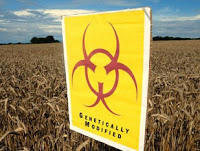 So what was President Obama doing when he appointed Michael Taylor, a former VP of Monsanto, as senior advisor to the commissioner at the FDA? The FDA is responsible for “label requirements” and recently ruled during Michael Taylor’s time as FDA Food Czar that GMO products did not need to be labeled as such, even though national consumer groups loudly professed the public’s right to know what is genetically modified in the food system.

Sad to remember: President Obama promised in campaign speeches that he would “let folks know what foods are genetically modified.” These are the conflicts of interest that lead to the 99% movement standing up for the family farmers.

Just look at the confusing headlines lately that have revealed that Midwestern farms of GM corn will be sprayed with 2,4-D toxins found in the deadly Agent Orange. Just refer to the previous lawsuits taken all the way to the U.S. Supreme Court by U.S. Veterans who tried to argue the dangers of Monsanto’s Agent Orange, and high rates of cancers in our soldiers who had to suffer the side effects from their wartime exposure in Vietnam.

In 1980 alone, when all this mess started with corporations wiping out the livelihoods of family farmers, the National Farm Medicine Center reported that 900 male farmers in the Upper Midwest committed suicide. That was nearly double the national average for white men. Even sadder is the fact that some of the farmers’ children also committed suicide. Studies show that when one generation of family farmers lose their farms, then the next generation usually can’t revive the family business and traditions later.

Jim Gerritsen, president of the Organic Seed Growers and Trade Association, has pointed out that there are fifth- and sixth-generation family farmers being pushed off their farms today, and because of a “climate of fear” (from possible lawsuits from Monsanto), they can’t grow some of the food they want to grow.

These farmers are the ones who have been able to survive the changes over the past 20 years by choosing to go into the budding niche of organic farming. Now look at what they have to deal with while trying to grow successful businesses: Monsanto’s threats.

Even organic dairy farmers have had to suffer lawsuits (from Monsanto) when they labeled their organic milk “non-BGH” referring to Monsanto’s bovine growth hormone used by conventional dairies.

Consumers want organic food, and they want America’s pure food source to stay protected in America. Made in America, organically, is the way of the future, and family farmers and seed businesses should be free to maintain their high standards for organic foods. They deserve protection from Big Agribusiness’ dangerous seeds trespassing on their croplands, not to mention the use of pesticides and herbicides on GM crops.

The organic industry has an “organic seal” which is also important to the success of family businesses, and even that stamp of quality is threatened by the spread of Monsanto’s GM seed contaminating their pure seed banks.

The banking industry is also partly to blame. Years before the mortgage crisis and homes fiasco we have now, the farmers were the first to feel the squeeze. I interviewed Willie Nelson in the 1980’s, and he mentioned even then the high rates of farmer suicides, and that Farm Aid was receiving letters from family farmers saying the banks had “called in their loans,” even though “we had never missed a payment.”

Was this just a veiled land grab for fertile lands, or an attempt to intentionally bankrupt independent family farmers? 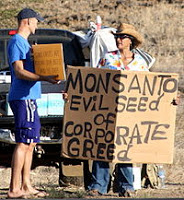 It was so inspiring years ago when Michelle Obama planted an organic garden at the White House. It was a great precedent for the future, but what happened? It was ruined when they discovered sewer sludge from previous administrations had contaminated their beautiful soil where the organic vegetables were planted. Just one small upset but it was remedied for future plantings.

What about our whole country’s organic food supply being contaminated by previous adminstrations’ bad choices? Why did they ever allow Monsanto to introduce genetically engineered seeds into our pure, organic, and heirloom stockpiles across America in the first place?

Recently, the Obama Administration, in an effort to boost food exports, signed joint agreements with agricultural biotechnology industry giants, including Monsanto, to remove the last barriers for the spread of more genetically modified crops.

But in this recent lawsuit filed by the Organic Seed Growers & Trade Association, it was argued that a previous contamination of a “genetically engineered variety of rice,” named Liberty Link 601, in 2006, before it was approved for human consumption, “extensively contaminated the commercial rice supply, resulting in multiple countries banning the import of U.S. rice.” The worldwide economic loss was “upward to $1.285 billion dollars” due to the presence of GMOs.

What are everyday Americans going to do to turn it around, to get rid of Monsanto’s genetically modified seeds and the threat they pose to America’s heirloom and organic seed caches?

There is a high rate of cancer in America, and eating healthier, especially organic foods, has been shown to have great benefits in beating cancer and other diseases. When we have agribusiness threatening independent family farmers, which leads to the farmers feeling so scared that they don’t even plant their organic crops that Americans need, then perhaps we can all see what the 99% Occupy movement is trying to say about their conflict of interest and seemingly abuse of powers.

Monsanto’s practices are a clear example of the direction that the 99% don’t want our country to go in. How about shining some light on Monsanto, and before it is too late, realizing the dangers of genetically modified seeds which are contaminating the world’s food supply.

[Jane Ayers is an independent journalist (USA Today, Los Angeles Times, The Nation, SF Chronicle, Truthout) and is director of Jane Ayers Media. She can be reached at ladywriterjane@gmail.com. This article was published by Nation of Change and distributed by Reader Supported News.]

1 Response to Jane Ayers : Willie Nelson and 300,000 Others Sue Monsanto