Jay D. Jurie : Are We Colonized? A Response to Chris Hedges 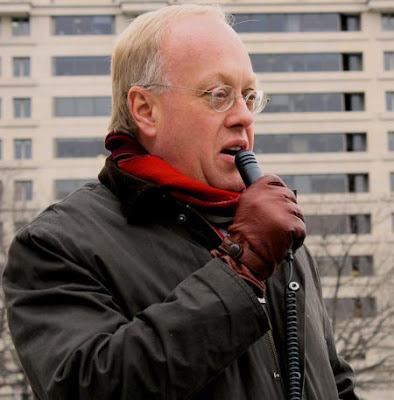 Hedges says that corporations play the same role in the U.S. today that British or French colonialism played in India or Indochina.

According to Chris Hedges, we’re no different than Third World inhabitants subjugated by foreign colonialism.

In one of his most recent columns (“Colonized by Corporations,” Truthdig.com, May 14, 2012), Hedges relies on the book The Developing Nations by Robert E. Gamer, to tell us “we have been, like nations on the periphery of empire, colonized.”

This means, he goes on to say, that corporations play the same role in the U.S. today that British or French colonialism played in India or Indochina in the past. Part of how this works is through the construction of “patron-client” relations, whereby real power is concealed, and the oppressed deal only with client regimes who do the dirty work of the foreign oppressors.

This is among the latest in a series of books and essays Hedges has written about the economic and political crises affecting not only the U.S., but how these are related to crises on the global level, and how this contributes to the rise of resistance movements, such as Occupy here at home.

His column is produced regularly on Truthdig.com, and according to his biosketch on that site, he was a foreign correspondent for almost two decades in locales including Africa, the Balkans, Central America, and the Middle East.

He has worked for a variety of media sources, and as part of a New York Times team, once won a Pulitzer Prize for coverage on terrorism. He left the Times after being reprimanded for speaking out against the attack on Iraq launched by the George W. Bush regime.

Hedges has written for a number of publications, including The New York Review of Books and Adbusters. He holds a bachelor’s degree in English literature from Colgate, a master’s in divinity from Harvard, and speaks several languages, including Spanish and Arabic.

Over the past several years Hedges has become directly involved in the resistance he once wrote about, most specifically the Occupy movement that grew up around the U.S. in the wake of the Occupy Wall Street events this past September. He has been arrested at Occupy-related protests, including one on November 3, 2011, outside Goldman Sachs in New York City.

This past January, he was joined by several others in filing a federal lawsuit against the threats to civil liberties posed by the National Defense Authorization Act — which resulted this week in a federal judge enjoining enforcement of the controversial provisions.

In a RawReplay interview with Muriel Kane at The Raw Story on September 25, 2011, Hedges described Occupy Wall Street as “Where the Hope of America Lies.”

In this same interview, Hedges characterized the U.S. as in transition to a “neo-feudal corporate state, one in which there is a rapacious oligarchic class, a thin managerial elite, and two-thirds of this country live in conditions that increasingly push families to subsistence levels…[the corporate state] wants to reduce the working class to a status equivalent to serfdom.”

Hedges has since expanded on that theme, including in this present column. He brings up the work of Frantz Fanon, who described Algeria under French colonialism. Changing the on-scene managers won’t bring about any changes in the real situation, as colonial rule will continue regardless.

In the U.S., this means a vote for either Obama or Romney won’t make any real difference, the “neo-feudal corporate state” will remain unaffected. This “patron-client” facade must be destroyed and “new mechanisms of governance” put in place.

Yet, according to Hedges, it’s not the “serfs” who are the real threat to the colonial apparatus, it’s the “declasse individuals,” the professionals who are losing their foothold as the economy hollows out, or are denied advancement as the ranks of the managerial elite grow thinner.

It is when these elements join with the lower echelon and share their message with them, that the apparatus is threatened. Malcolm X understood these dynamics, which is why he was more of a direct threat to the system than Martin Luther King, Jr., who still worked within “patron-client” relations.

Eventually the corporate elite will become increasingly venal and corrupted. They will resort to violence to retain power, but will become increasingly unable to stabilize the situation. Violent revolutionary groups will arise to challenge the elite, as did the Black Panthers, the American Indian Movement (AIM), and others in the 1960s, but they will hold back, rather than advance desirable social transformation.

This is obviously a slap at the “Black Bloc,” a current tendency that Hedges identifies with the earlier groups.

Ultimately, the “neo-feudal corporate state” will collapse when it loses legitimacy among the last of those responsible for upholding it, when they defect, and when some cross over to the resistance.

Hedges advises people to go ahead and vote this coming November, but only for a third party candidate, as a way of registering protest, then get back into the streets where the real changes will take place.

In response to Hedges, it’s true that “unequal exchange” produces certain conditions that are functionally the same in developed as in underdeveloped countries. It’s also true that these conditions are in some respects becoming increasingly similar. Shanty towns under bridges in Miami look increasingly like favelas in Brazil. But there are some differences, and Hedges glosses over the processes by which these manifest.

Although Hedges makes passing reference to Karl Marx, he seems unfamiliar with either Marx, or more contemporary Marxist sources, such as Samir Amin, Antonio Negri and Michael Hardt, Ellen Meiksins Wood, David Harvey, and others, who for quite some time have addressed the conditions he seeks to describe.

Much of what Hedges describes in some ways fits well with Negri and Hardt’s “empire” theses, wherein they discuss the transnational character of the capitalist system, and how conditions from the developed countries are reproduced in underdeveloped countries.

It’s unclear why Hedges doesn’t employ such analysis. Maybe he’s trying to be careful and not alienate a predominantly liberal audience, maybe he doesn’t like or agree with this source material, or maybe he’s not conversant with it, and I suspect the latter.

In this column he makes direct reference to Alexander Herzen, a Russian who exerted some influence on the subsequent revolution in that country. Like Herzen as an earlier expression of the change process, Hedges seems to be feeling his way along, his perspective seems to be evolving, and he wants others to join in the voyage of exploration.

Following Garner, Hedges contends disaffected groups don’t attack the underlying sources of problems, instead they confront what some Marxists have termed as “compradors” or in other words, “intermediaries.” In this regard, Hedges misapplies Fanon, who was addressing a context dominated by an actual colonial power, where the French had put into place, and actively propped up, indigenous elites.

Though there are some similarities, the U.S. is not occupied by a foreign power, as was Algeria. If Hedges were to make this case regarding the U.S. in relation to Iraq or Afghanistan, he’d be much more on target.

As it is, the comparison has limitations. It is easier for subject populations to associate corporate domination with foreign rule. No doubt, the Iraqi people associated Blackwater with the U.S. occupation. It’s not quite the same, or as easy, for people in the U.S. to make that same association. Nor do they have to cut through two sets of “comprador classes” to get at the problem.

There are other issues as to the comparative composition of the class structures that have been oversimplified by Hedges, but they are beyond the scope of the present discussion.

In terms of minor critiques, it’s not news, at least not to many Rag Blog readers, that the election of either Obama or Romney will not dislodge, or do anything meaningful about, the underlying domination of corporate power. Hedges is basically correct in his assessment of “declasse intellectuals,” but again, that’s not news. Any serious scholar of revolutionary process would point out the same.

Though Hedges is correct that Malcolm X was much more forthright, it’s not certain that Martin Luther King, Jr., harbored any illusions about the nature of power in this country. His speech on Vietnam reflected comprehension of the dynamics that initiated the war as well as its likely domestic consequences.

Hedges’ assessment of “radical violent groups,” at least in the case of the Black Panthers and AIM, is not wholly on track. A more nuanced and sophisticated position is required, that takes into account the self-defensive nature of much of that history.

Finally, there are serious questions about the “futility of elections.” Hedges performs a service by raising this issue, but falls short in terms of a comprehensive assessment. Yet again, we full well understand that whether Obama or Romney is elected, we will not see fundamental change.

But that’s not the same as some who mistakenly argue that “there’s no difference between the two,” plus it leaves out other situations where there’s more of a difference to be made: for instance, it’s better to have Bernie Sanders in office than not.

We also should not throw out the possibility that serious change could result through the electoral process. This doesn’t mean the sort of phony examples represented in countries like France, Spain, or Portugal, where “socialists” keep getting elected and no basic social change transpires.

As exemplified by Mitterand, when he was president of France, this could be called “SINO,” or “socialism in name only.” No difference should be expected from Francois Hollande, who was just elected in France. He might modify French participation in the Eurozone, but will do virtually nothing to replace capitalism.

In actuality, the main European parties who call themselves “socialist” should be known as “social democratic,” which in modern parlance is what they are.

But we do have some better examples. There was Allende’s Popular Unity government in Chile, and the reason it was overthrown was that the government was genuinely moving Chile to socialism. It actively sought to free itself from both colonial and corporate domination. Today, we have Hugo Chavez in Venezuela, and his government is on the road to a similar underlying transformation. I

n other words, the prospect of an electoral transition to real social change shouldn’t be tossed out, but it’s an absolutely essential imperative that it be led by significant popular organizations and a vast grassroots movement, as in Chile, which must have the involvement of disaffected “declasse intellectuals,” as in Venezuela.

There has to be a strong and well-organized movement “outside” the electoral arena, most especially if any “inside” strategy is to be effective.

As to whether people should vote for third parties in November, as Hedges proposes, while I personally believe there may be some significant incremental differences, plus strategic advantages, to be gained through the reelection of Obama, I remain agnostic on the question of how anyone should vote.

There are good and valid reasons not to vote for Obama, and I’m not going to castigate anyone who should decide instead to vote for a “protest candidate” to his left.

[Jay D. Jurie, a veteran of SDS at the University of Colorado at Boulder, is a resident of Sanford, Florida, where he teaches public administration and urban planning. Read more articles by Jay D. Jurie on The Rag Blog.]

Sources:
Though I was aware of Negri and Hardt’s Empire, I thank Bruce Goldberg for bringing its importance to my attention. Any misinterpretation is my error, not theirs, or his.
Muriel Kane September 25, 2011 interview: www.rawstory.com/rawreplay/2011/09/chris-hedges-occupy-wall-street-is-where-the-hope-of-america-lies /

2 Responses to Jay D. Jurie : Are We Colonized? A Response to Chris Hedges