Jay D. Jurie : Behind the Chilean Mine Disaster 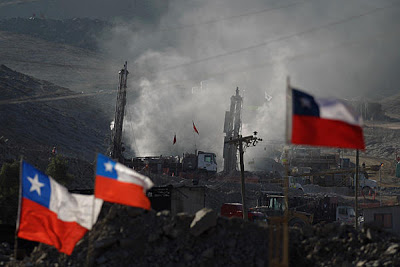 Drills are seen outside the San Jose Mine in Copiapo, Chile, where 33 miners were trapped 2,000 feet under the ground for more than two months. Photo by Roberto Candia / AP.
What’s caused it and what’s next?
After the Chilean mine rescue

Besides focusing on one miner with a wife and a mistress, much has been made by major media outlets about the lucrative opportunities awaiting the 33 miners recently rescued from the San Jose copper and gold mine in Copiapo, Chile.

Little attention has been devoted to what led to the disaster, or what the future may hold for Chile’s thousands of other miners. Chile has a mining fatality rate of over 30 per year, and the Chilean government has not yet signed the International Labor Organization’s Convention 176 that establishes safety and health protocols for mining.

The owner of the San Jose Mine is the San Esteban Mining Co., a privately-owned firm that, like Massey Energy or BP in the U.S., has a poor safety track record. Like much “penny wise and pound foolish” management philosophy these days, it has been claimed the company did not want to fund inexpensive measures that would have prevented the disaster.

Early in the disaster San Esteban stated they didn’t have the funds to launch a rescue. They stopped paying the 33 trapped miners and laid off 200 others. San Esteban’s assets were frozen by the Chilean government in order to pay for the rescue operation.

Chilean miners, including those who worked at San Jose, are represented by a union, CONFEMIN (Confederacion Minera de Chile), that claims safety complaints they filed with San Esteban were consistently ignored. Labor representation. coupled with the promise of Chilean President Sebastian Pinera to improve workplace safety across the country, offers at least a small measure of hope.

1 Response to Jay D. Jurie : Behind the Chilean Mine Disaster