ORLANDO, Florida — On June 1, 2011, life in downtown Orlando’s Lake Eola Park was pretty much the same as on any other Wednesday this time of year: in one corner of the park a group was set up to dish out food to all comers. What turned out different on this particular occasion was that the Orlando Police Department crashed the line and arrested three members of the anti-militarist and anti-poverty organization, Food Not Bombs (FNB), for the “crime” of providing free food to the homeless.

Arrested were Jessica Cross, formerly a student activist at the University of Central Florida; Ben Markeson, a long-time participant in Orlando FNB and a member of Orlando’s short-lived chapter of Movement for a Democratic Society (MDS); and Keith McHenry, a co-founder of the national FNB organization. 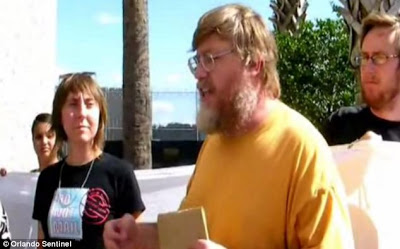 Ben Markeson, arrested along with Jessica Cross (left) and Keith McHenry for feeding the homeless, says that Orlando Food Not Bombs will continue to feed those in need at Lake Eola Park in Orlando. Photo from Orlando Sentinel / Mail Online (U.K).
Food Not Bombs began in 1980 as an offshoot of New England’s anti-nuclear power Clamshell Alliance. For more than 30 years FNB has organized chapters worldwide with a two-fold mission: to graphically illustrate poverty in the face of bloated military spending, and to provide a direct service to those in need.

According to their Facebook page, “Food Not Bombs is a worldwide effort to feed anyone hungry and end violence.”

FNB’s website tells us that “Food Not Bombs shares free vegan and vegetarian meals with the hungry in over 1,000 cities around the world to protest war, poverty and the destruction of the environment.” Then it asks, “With over a billion people going hungry each day how can we spend another dollar on war?”

Beginning in January 2005, Orlando FNB served people in Lake Eola Park without incident. In 2006, reacting to complaints from nearby merchants who wanted the homeless moved “out of sight, out of mind,” the City passed an ordinance that prohibited feedings of more than 25 people at a time without a permit, and limited permits to a twice-yearly basis.

Orlando FNB continued the feedings and as a co-plaintiff with a church organization, filed suit in federal court, alleging violation of First Amendment rights. One member of the group was arrested in 2007, but acquitted at trial.

In 2008, federal judge Gregory Presnell partly ruled in favor of the plaintiffs. He did not find that the City’s feeding ban violated freedom of religion, but found that the ordinance did violate free speech rights. Orlando decided to appeal, and a three-judge panel from the conservative 11th District Court of Appeals in Atlanta sided with the City.

However, in an unusual move, they forwarded their ruling for consideration by the full 10-member appellate panel. Some held out hope that this was a signal that the full court would deny the appeal. In April 2011, that hope was dashed as the Court voted unanimously to uphold the City’s ordinance.

While Orlando FNB continued the feedings, on two separate dates after their court victory, May 18 and May 23, the City “paid” for permits that FNB had not requested and which they rejected. There was one additional “unpermitted” feeding on May 25 before the City apparently decided to move forward with arrests. It remains to be seen how all this will play out.

Meanwhile, the critique made by Food Not Bombs is worthy of serious consideration.

In fiscal year 2010, $9.7 billion was expended on school lunch programs nationwide. The Women, Infants, and Children program spent $6.7 billion on combined food and nutrition services. For fiscal year 2011, it was estimated $85.2 billion would be spent on food stamps. Aggregated, these expenditures aimed at meeting the food needs of the nation’s neediest come to $101.6 billion.

These figures can be contrasted with the Pentagon’s $671 billion budget request for fiscal year 2012, which shows that the totals for low-income food support are less than one-sixth that of the military budget. Taxpayers might wonder why they are not getting a better deal when 19 fanatics armed with box cutters did the most damage to this country since the Japanese attack on Pearl Harbor in 1941, and all the trillions spent on “national security” or “defense” in the intervening decades provided no protection.

If looked at from the local perspective, most are not getting a better deal. While pressing for lower tax rates for business, Florida Governor Rick Scott recently signed legislation that will limit unemployment benefits for the laid-off. He also signed a bill, which he avidly promoted, that will require welfare recipients to be drug-tested. 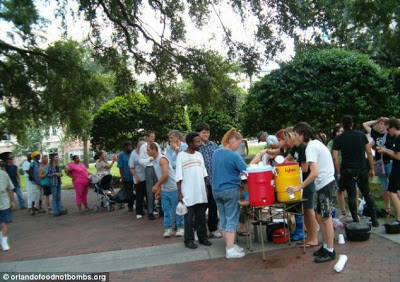 Food Not Bombs members have been arrested several times over the past few years in Orlando, though all have been acquitted so far. Image from orlandofoodnotbombs.org / Mail Online (U.K.).
Orlando has spent hundreds of millions of taxpayer dollars to build three “venues” that will primarily serve the interests of the affluent at the expense of the middle class. Among these venues is the new arena demanded by billionaire Orlando Magic basketball owner Richard DeVos. His team put up about $60 million while taxpayers footed the remaining $420 million of the bill. Included in the arena are skyboxes the City has reserved for itself, so the same Mayor Dyer and the City Council who passed the anti-homeless feeding ordinance can view the Magic games in luxury.

Ironically, at Lake Eola Park, the locus of the feeding controversy, the fountain which is the park’s central feature was recently repaired at a cost of $1.6 million. While most of the repair was funded by insurance pay-outs, it was yet another reflection of the City’s problem-solving capabilities, at least when it comes to what is viewed as a priority.

As if to underscore the most fundamental point made by Food Not Bombs, according to Richard Reep in the June 2, 2011 issue of New Geography, Orlando has become the host to the nation’s largest war simulation center, with an estimated 18,000 employed in this “growth industry.” Some would argue, along the lines of “trickle down” theory, that all the tax dollars thrown at Orlando’s tourism industry, attractions, venues, and military research are needed to support programs that help the homeless.

In 2009, the City of Orlando Housing and Community Development Department received and dispersed some $7.3 million in federal funds for low-income housing support. Note the emphasis on federal, not local funds. Other low-income housing services are funded and provided by nonprofits, not the City of Orlando. This is also the case with food banks, soup kitchens, and so on, which are provided by nonprofits and charitable organizations.

Any claims that the City is providing for the needs of its less fortunate residents rings hollow in the face of the evidence that the City marginalizes this population while spending hundreds of millions of middle class tax dollars to serve the interests of the most affluent.

In upholding the City’s ordinance, the 11th District Court of Appeals has further diminished the rights and liberties of all citizens, not just the homeless and their advocates. As an old labor slogan put it, “an injury to one is an injury to all.” In its ruling, the Court proclaimed the “time, place, and manner” restriction of the ordinance was justified.

It used to be presumed that freedom meant persons were at liberty to act in accordance with First Amendment rights and government was constrained from interfering with the exercise of those rights. Current “time, place, and manner” restrictions have stood this assumption on its head. These days, the presumption is that persons are not at liberty to exercise such rights unless the government says so.