Jean Trounstine :
‘Kids for Cash’: Taking abuse of power to a new level

Hard to imagine that a judge could devastate families and delay so many lives? Well guess what… 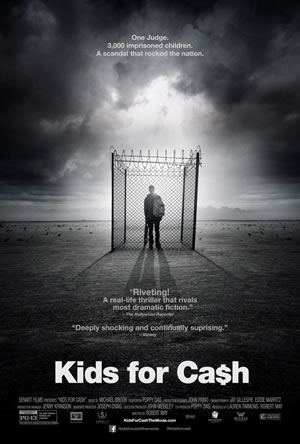 Kids for cash: Taking abuse of power to a new level.

Kids for Cash is a movie that’s going to rock your understanding of what we do with kids in our criminal justice system — at least what we do when we have bad judges, bad policies, and a public that desperately needs to be educated. The movie is currently in previews across the U.S. and should hit your town in February, so be on the lookout.

Kids for Cash depicts a small town in Pennsylvania that “celebrates a charismatic judge who is hell-bent on keeping kids in line,” until parents and legal agencies finally question the motives behind his so-called “brand of justice.” It takes you into the lives of the youth and their families, and the justifiable rage that resulted from a scandal that devastated the lives of over 5,000.

In 2007, the Juvenile Law Center in Pennsylvania discovered that hundreds of children in Luzerne County were routinely waiving their rights to counsel when they appeared before Judge Mark Ciavarella.

And not only were they found guilty for incredibly minor offenses — one girl got in a fight at school that could have been solved by parents and counselors working together; another student made fun of a teacher on a MySpace page; the kind of drinking or dope smoking that might have resulted in being grounded, if a rational approach was in the offing — but Ciavarella was sending these kids away to so-called “camp,” essentially detention centers, i.e. jails for kids.

Ultimately the Law Center was able to expunge the records of 2,251 of these teens.

Along the way it was discovered that Ciavarella and another Luzerne County judge had accepted nearly $2.6 million in alleged kickbacks from two private for-profit juvenile facilities. Ciaverella and his crony, Judge Michael Conahan, were found guilty of $2.6 million in tax evasion and fraud. Ciaverella went to prison for 28 years. But not before one of his charges shot himself in the head.

Taking a child from his or her home should be the last resort not the first!

This story has elements that are truly tragic. Taking a child from his or her home should be the last resort not the first! In Massachusetts, the term “detention” refers specifically to holding youth in the custody of the Department of Youth Services or DYS, prior to trial. Citizens for Juvenile Justice says that our kids who “pose a flight risk” are the ones who should be held, and that all others do better staying in their homes and with their family while awaiting trials, many of which are ultimately dismissed.

The ACLU says that it is not uncommon for youth who become involved in the juvenile justice system to be denied “procedural protection,” in the courts, and there are cases where up to 80% of children (in one state), do not have lawyers. Kids of color are more likely to be suspended, expelled, or arrested for the exact same conduct in school. Plus, the horrendous policy called “zero tolerance,” which even President Obama has cited as horrific, is adding to our tragedies as a nation.

The Juvenile Law Center posted this on its blog, January 7th, 2014, showing the kinds of cases and results that this national school policy has led to:

The boy scout who brings his pocket knife to school, the kid pretending to ‘shoot’ people with a finger gun, the teen who packs ibuprofen in a book bag…suspended or expelled for minor, childish behavior under the guise of “zero tolerance.” These policies are meant to keep children from bringing weapons, drugs or alcohol to school, and deter any form of violence or sexual behavior.

While keeping our schools safe is a shared goal, zero-tolerance policies actually undermine that goal and often yield absurd results.

When I worked at a residential school some years ago, I saw these kids, the ones that were taken out of their homes because they were considered too dangerous to be in public schools. The reality is that parents needed more help to deal with them; they needed more support to succeed in terms of one-on-one education and counseling; they thankfully got to go home on weekends and be at the school during the week. They were not imprisoned.

‘…if you threw a spitball, they got the police, and you ended up in juvenile court and got sent away.’

A line from the film that really knocked me out came from the former Chief Public Defender in the Ciaverella case: “The last couple years if you threw a spitball, they got the police, and you ended up in juvenile court and got sent away. Schools loved it! They got rid of all their problems.”

This is an important film. I hope you will see it, share it with friends, and think about how we want to discipline our children. After all, they are children. Corrupt judges aren’t news. As Grits for Breakfast posted last year,

In Hidalgo County, the recently expanded juvenile detention facility is already full, mostly with misdemeanor offenders, primarily because of paperwork delays by the local PD and the inexplicable failure of Judge Jesse Contreras to show up for work and stay there long enough to move his cases, reported the McAllen Monitor.

The result is that kids were sleeping on the floor.

But these two Pennsylvania judges took abuse of power to a new level.