Many wonderful articles appeared about mothers in prison as we celebrated this Mother’s Day. 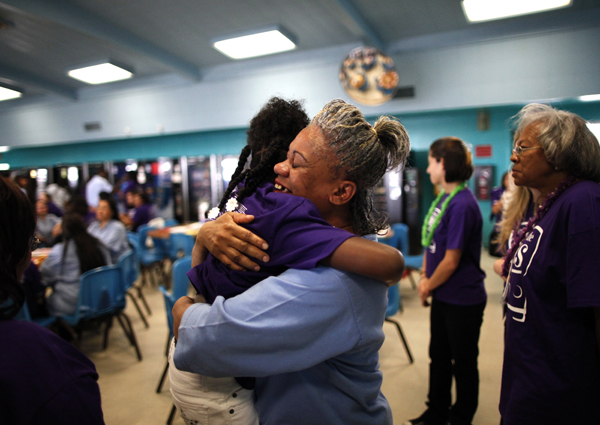 Nancy Mullane, on the blog she co-founded, The Life of the Law, interviewed Veronica Martinez at Folsom Women’s Prison in California. There you can listen to or read about Martinez, to learn how she was shackled during birth and had to give up her baby after three days — luckily to her family. In spite of that horrendous experience, Martinez also points out the amazing support of the other women in the jail where she was at the time:

My bunkie had a collage of babies pasted. She had pasted it with toothpaste, cause that’s what we used. In the county jail, you don’t have tape or glue or any of that so she took toothpaste and she pasted all these pictures of cutout magazines and baby feet and babies and stuff. And she made a little sign, ‘It’s a Girl’ on my bunk.

Martinez, like so many women, echoed this sentiment about the cohort of women behind bars: “Everybody comes together in stuff like that cause women, we do understand. It’s not an easy thing to just give up your baby like that.”

Rachel Roth, activist and reproduction rights expert, wrote on the blog, Mom’s Rising, “Just in Time for Mother’s Day, Minnesota Bill Against Shackling Pregnant Women Heads to Governor.” Roth pointed out that Minnesota becomes one of 19 states that now have “some type of statute limiting the situations in which a pregnant woman can be shackled.” 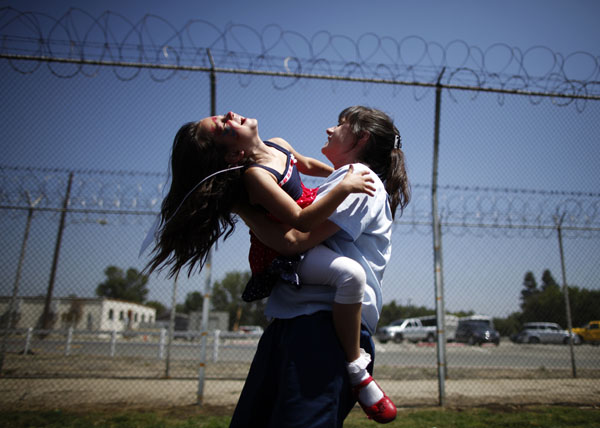 Deborah Jiang Stein, who was born in prison to a pregnant incarcerated and addicted mother, wrote her story in Prison Baby. She knows first-hand how, instead of prison, addicted mothers need “family support, community health care, wellness alternatives, and access to community resources,” for what Jiang Stein calls “a positive path to wholeness, health and full citizenship.”

She presents facts on her website The unPrison Project, and they are compelling, although she doesn’t cite where the stats come from. While I have heard 70-80%, she says that 85% of women in prison are mothers. She also says that “2.3 million minor children, or 3% of all children in the U.S., have a parent in prison; most under age 10.”

I thought how sad it is that children must manage when parents are incarcerated.

From my research, when I wrote about holidays behind bars for Boston Magazine, I thought how sad it is that children must manage when parents are incarcerated, which according to Pew Research Study is not as rare as you might think: one in 28 kids has a parent in prison, nationwide.

Andrea James, now Executive Director of Families for Justice as Healing, based in Massachusetts, wrote about what it was like to leave small children and go to jail in her book Upper Bunkies Unite: And Other Thoughts On the Politics of Mass Incarceration. In a recent article on Huffington Post, James made the point that the so-called War on Drugs is responsible for separating many nonviolent women from their children, clearly calling for other ways to deal with behavior that needs “correcting.” 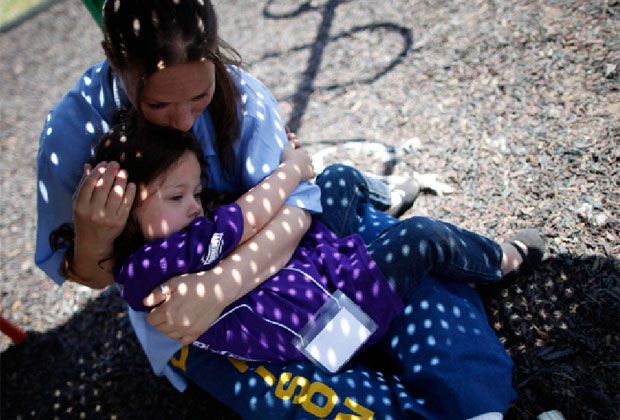 Victoria Law also wrote about Families in her article for Waging Non-Violence, and brought up that the group of incarcerated and formerly incarcerated women is organizing a FREE HER rally in Washington, D.C. on June 21, an idea that emerged while James was serving time. Per James:

We wanted to have a huge public event to raise our voices and raise awareness of all the women inside who are separated from their families and their communities… We also want to let the legislative and executive branches know that people are
paying attention. These are people we care about.

In my experience teaching at Framingham Women’s Prison in Massachusetts, I remember Mother’s Day in prison and the heartbreak of women having to see their children in the Visiting Room for a few hours, or the more poignant heartbreak of their children not being able to get transportation to the one state prison for women. The connection was so strong between mother and child that even time and distance could not, in most cases, sever that bond.

One of the most touching experiences I had around that issue was when we produced plays in prison.

One of the most touching experiences I had around that issue was when we produced plays in prison. We taped the play — these were home videos, mind you, always with a see-saw effect of an amateur holding camera, but generously filmed by a dear soul in the Education department at the prison who believed as I do in theatre as transformation. We then sent these tapes home to the families of the woman so they could be proud of their work—in perpetuity. I began a tradition of allowing each participant to have a few moments on tape to talk to her mother, father, grandparents, lover, or to her children. The women would tell their kids “If Mami can do this, then you can too,” or “See, Mommy is in school, just like you!”

The women looked forward to these video moments. They were so simple but so important, and ultimately, when they received letters back or talked to their family during coveted phone time, they shared with me how proud they were that their parents and their kids were proud of them. This is not to say that they should have been incarcerated in prison — many could’ve benefitted from treatment rather than incarceration — but that they did something to make use of their best selves while they were there. 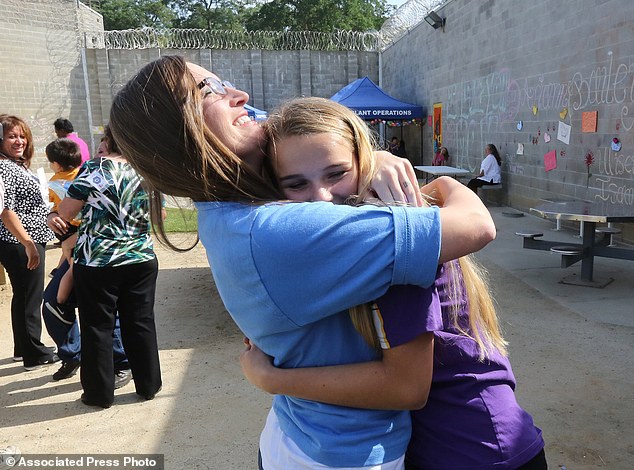 Mother and daughter at a California prison. Photo by AP.

On Mother’s Day, I remember my mother who died while I was teaching in prison, and the amazing comfort my prisoner-students gave me when I went behind bars to teach. On Mother’s Day, I also remember a prisoner I loved, Bertie, who somehow killed her baby and lived with that gruesome truth torturing her all her life.

I honor Dolly, the heart and soul of my theatre program at Framingham. Dolly lost her mother when she was behind bars and could not go to the funeral; she lost her grand-daughter too who was brutally murdered. And while she suffered the losses and the stinging pain of being away from her family during those funerals, she received as much comfort as possible from the women. Just as Martinez says, the community behind bars knows what it is to bear such tragedies. And they know too what it is to see pure joy in the eyes of a child.

This Mother’s Day and the week thereafter, honor women behind bars by educating yourself about the Free Marissa Campaign. Per The Nation, “Activists launched a Mother’s Day ‘Week of Action’ campaign this past Friday to support Marissa Alexander, the Florida woman facing 60 years in prison for firing warning shots to ward off her abusive husband.” Alexander is a mother of two teenage twins and a three-year-old daughter, and she spent this holiday under house arrest. The campaign runs May 9-May 18 and you can find out more here.