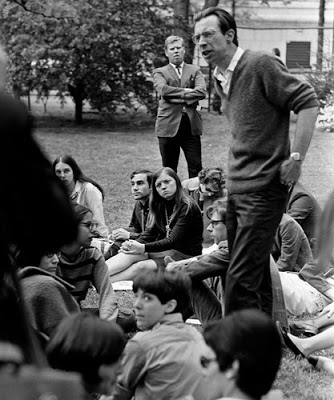 [Carl Oglesby, a former president of the Students for a Democratic Society (SDS) and perhaps the New Left’s most eloquent orator, died Tuesday of lung cancer. He was 76.]

In 1965 those of us in SDS confronted shifting our focus from organizing the poor and disenfranchised to taking on the war in Vietnam. It was a momentous decision because we understood that the full weight of the government security apparatus would persecute us individually and try to destroy our collective movement.

At our national meeting, in the best Socratic tradition, the debate about our future moved back and forth, with one articulate and persuasive speaker after another arguing with passion. I still remember that none was more articulate or persuasive than Carl Oglesby.

And his intellect was matched by a soaring vocal cadence that hinted of balmy nights spent at tent revivals with preaching that served as entertainment (pre-internet and cell phones), and choirs with music that could uplift you into heaven.

A lanky, almost raw boned, South Carolinian, Carl was the only white organizer I heard who could match the speaking power of the best civil rights leaders. Years later, I asked how he had learned to speak so well. He answered that it wasn’t tent revivals but that, as a boy sitting in the woods around campfires, he was captivated by the richness and cadence of stories told by the older working men.

That year Carl was elected president of SDS and I was elected vice president. It signaled a gravitational shift in SDS from leadership of sons and daughters of East Coast progressive families to people who were nurtured in but rejected the sensibilities of the right-wing heartland. SDS and our country as a whole were experiencing seismic shifts.

Carl and I hiked down to Lake Kewadin to talk over what we should do. In no time we were throwing stones and challenging each other to see who could throw the furthest. As I remember, Carl was a rangy centerfielder on a semi-pro baseball team and I had been a pitcher who tore up his shoulder in high school.

This moment gave me great confidence. Here we are at the gathering of the white hot center of American radicalism throwing rocks into the lake. Our physical competition seemed so grassroots, so American. I knew for sure in that moment that Carl was the real deal; the embodiment of the heartland we had to touch and organize.

I just took down an old album and looked at photos of my friends at that SDS meeting. Carl looked just a touch older than the rest of us.

But God! We all were so young and… so innocent. And dare I say — so right.

[Jeff Shero Nightbyrd was national vice president of SDS and later was active with the Yippies. Jeff helped start Austin’s original underground newspaper, The Rag, and edited RAT in New York. Jeff now directs Acclaim Talent, one of the largest talent agencies in the Louisiana/Texas region.]