Jeffrey Nightbyrd : Rehearsals for the Apocalypse 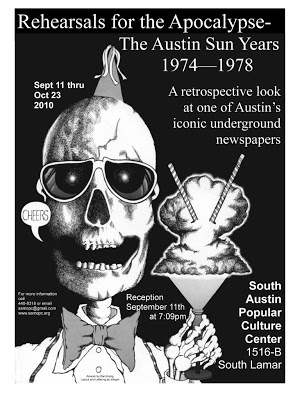 Underground journalist and Sixties activist Jeffrey Nightbyrd will be Thorne Dreyer‘s guest on Rag Radio on KOOP 91.7 FM in Austin, Tuesday, September 14, 2-3 p.m. (CST). To stream Rag Radio live, go here. To listen to this show after the broadcast, or to listen to earlier shows on Rag Radio, go here.

‘Don’t be a slave to the rules’:
Our time in the sun

See ‘The mysterious murder of Michael Eakin,’ by Jeffrey Nightbyrd, Below.

[The Austin Sun was a counterculture paper published in Austin from 1974-78. It was born of the underground press, and served as a precursor to the many “alternative” publications that would follow. The Sun‘s influence went far beyond its short life span. It served as an incubator for major talent and helped stimulate the development of Austin’s music scene, helping artists like Stevie Ray Vaughan, Joe Ely, Marcia Ball, and Butch Hancock reach a wider audience.

The Sun was founded by Jeffrey Nightbyrd and Michael Eakin. Nightbyrd — formerly Jeff Shero — was a major figure in the Sixties New Left, in Austin and nationally. He served as national vice president of SDS and was active with the Yippies. Jeff was involved with Austin’s original underground newspaper, The Rag, and also edited RAT in New York. Jeff now directs Acclaim Talent, one of the largest talent agencies in the Louisiana/Texas region.

(Co-founder Michael Eakin, a former editor of the Daily Texan, was shot to death in 1974. The crime was never solved and is believed by many to have been related to a story he was researching on the South Texas Nuclear Plant. See the sidebar article below.)

A retrospective exhibit of art from The Sun (“Rehearsals for the Apocalypse: The Austin Sun Years 1974-1978)” is currently showing at the South Austin Popular Culture Center. The following was adapted from notes Jeff wrote for the exhibit.]

In Austin tolerance has become widespread but our economy dangles on a precipice, we are fighting overseas wars, and our natural world is imperiled. Hence the title of this museum exhibit: “Rehearsals for the Apocalypse. The Austin Sun Years.”

The hard facts are that former Daily Texan editor Michael Eakin and I thought it was essential to create an Austin newspaper that presented alternatives to the local information sources. So we went about raising money.

People like Bud Shrake who had just sold a movie script to Hollywood pitched in.

Over a brief few years many great writers and artists got their start. My first partner, Michael Eakin, was murdered under suspicious circumstances. And like an improbable reality show, we sunspots kept surprising each other with bursts of originality.

Finally hard economic reality set in forcing me to take in a “liberal” real estate investor. Soon he bought up more stock than anyone and ousted me as a “terrible manager.” His condemnation — “You don’t even have a time clock!” — still rings in my ears.

Afterward, most of the Sun staff followed their muse and found more success.

For most of us the Sun years were a time of plenty… or should we say our time in the Sun.

Following are some thoughts and memories:

The Sun crew laughed at the over-culture’s hypocrisy about drugs. After all, we live in America — the society that invented the “Drug Store.” Some drugs like alcohol, caffeine, and nicotine (the most addictive of all) had legal sanction. But others, like pot, could send a smoker to prison. (Pot prisoners are almost half the population of many jails and we never saw pot smokers getting into fist fights in bars.)

In the Sun era, creative Texans reached for transcendence through peyote and mescaline just as the indigenous Indians had for thousands of years before. Into the mid-Sixties peyote could still be bought at cactus nurseries. Then the hysteria fed by the establishment media set in, demonizing psychedelics as madness-inducing. We tried to bring enlightenment to the frenzy.

Burroughs, the apocalyptic futurist and author of Naked Lunch, inventor of cut-up writing, and beatnik legend, inspired the Doom issue of the Sun, which in turn inspired the theme of this exhibition, “Rehearsals for the Apocalypse. The Austin Sun Years.”

Burroughs contributed his articles to the underground press for free.

Michael Ventura, a Sicilian street kid from Brooklyn, stopped by the Sun on his way out of town and got his first paid writing assignment. A curious combination of street-toughened, world-class dirty dancer and Talmudic-like scholar, he became a creative mainstay of the Sun. His apartment walls were astonishing, covered with voluminous hand-lettered note cards, quotes from the world’s greatest and most obscure thinkers, thousands of posted notes that worked as brain stimulants for his essays. 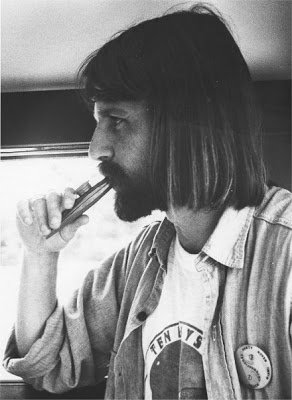 Jeffrey Nightbyrd, in the day.

The national Rocky Horror Picture Show Saturday night phenomenon took off in Austin. The producers called the Sun and asked if we would sponsor a test event to see if Rocky Horror had legs, as they say in the movie biz. Tim Curry flew in, and a raucous crowd at the Paramount Theater cheered their way through the look-a-like contest. By the end of the night the sell-out crowd had sung their way through the entire movie and a phenomenon was born.

The clubs kept giving birth to stunning and original bands and musicians that would make jaded veterans pause in awe. I remember Michael Ventura touting a new guitarist, Stevie Ray Vaughan, and watching him for the first time in an obscure club on Red River called the One Knight. Eight people were in the audience. But Stevie didn’t care.

Driven like a Hendrix or a Picasso he ripped through songs so fast and beautiful that you knew you had entered a moment of magic shared only by a few. Soon the venues grew much bigger. But somewhere in Austin right now another young genius is playing.

The Sun wanted to keep the government out of all our bedrooms. But in this era gays could still be prosecuted as sodomists, and women were not secure in the Roe v Wade ruling that protected the privacy of their bodies. We felt the rainbow of sexuality that is the human experience was none of any government’s business. Relationships of any kind are hard to sustain. So, root for everybody. The Sun rooted for all consenting adults and championed the right of the abnormal to find their happiness

Writers fresh from the academic reformatory that is the university would bring us lifeless prose. What would now be slam poets would arrive, ignorant of the rules of English grammar, and put down words that were captivating.

I told writers: “Don’t be a slave to the rules — make the language your slave. Do anything that works.” I would suggest reading advertising copy. Or translations of the Chinese master Li Po and Tu Fu. In extreme cases I would hand writers a copy of the poems of e. e. cummings. There are no rules of good writing save putting down words in any fashion that communicates with passion.

Taking a page from the Wild West, gun-toting hired guns stuck up the guards at the Piedras Negras jail and freed a gringo rancher’s son. In the mayhem, a bevy of hippie pot prisoners made their escape running down to the Rio Grande and swimming the river. First thing, they called the Sun to tell their story. We were just going to press, so at 2 a.m. the art department redesigned the cover and we beat the dailies by two days. 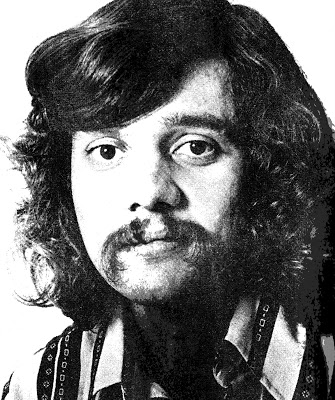 Austin Sun co-founder and former Daily Texan editor Michael Eakin was a dogged opponent of the South Texas Nuclear Plant. On April 14, 1979 he was shot to death while sitting in a parked car in Houston. The crime was never fully investigated. There are few hard facts in the case.

The South Texas Nuclear plant was built after politicians overcame huge opposition within out city. There is no proof that Michael’s murder had anything to do with his journalistic investigations. But former Sun investigative reporter Todd Samusson recently sent me some very disturbing information which follows:

I had extensive experience of harassment for doing anti-nuke organizing in Austin. I was physically assaulted several times. Always by two large thuggish-looking guys but never the same two. I had my house ransacked and nothing stolen but an address book. I received threatening calls. I had my porch light smashed out three times. I even came out of a meeting once and found a bullet hole in the rear window of my truck (that same piece of crap I used to schlep Austin Suns from the printer in Taylor back to the Sun offices). My car window had a bullet shot through it.

Michael Eakin obviously had it much worse. In the weeks preceding his death he told me he was working on a freelance article about cost overruns at the South Texas Nuclear Project. He said he had been interviewing construction workers at the site about intentional slowing down of work to drag out the project. Also about major flaws in the concrete pours of the containment buildings. (These stories were later confirmed in articles in the Austin American Statesman — I think written by Bruce Hite.)

Michael was shot point blank and killed in his car in Houston with a small caliber pistol (weapon of choice for mob contracts, according to police). Also shot was his passenger Dilah Davis. She was hit in the face but survived. She was very active in Austin Citizens for Economic Energy the electoral group working against the nuke.

That project was done on a cost-plus basis. There was absolutely no incentive for Brown & Root to come in at the contract price. In fact they had every incentive to seek cost overruns. The south Texas nuke was originally bid at $700 million-plus. When I left Austin in 1988 the cost was heading toward $4 billion. The nuclear industry isn’t about how to best generate electricity; it’s about construction gigs. And, on a bigger scale, it’s about bonded indebtedness on electric utility bonds used to pay for that construction. That $4 billion turns out to be way, way more than that over the life of the debt.

So the money trail is way bigger than Brown & Root. It goes to huge bond houses. Anybody along that trail had motive to stop Michael from prying.

Brown & Root was eventually fired for its cost overruns and replaced by Bechtel. But they went on to do well, becoming KBR (Kellogg Brown & Root) and making zillions from the current war in Iraq.

Michael Eakin should not be forgotten. As a journalist he pursued his passion to expose corporate corruption to the end.

Now showing!
Rehearsals for the Apocalypse

The South Austin Popular Culture Center is presenting a landmark exhibit featuring the underground/alternative newspaper the Austin Sun. The exhibit will run from Sept. 11 through Oct. 23.

“Rehearsals For The Apocalypse” encompasses the entire run of the Austin Sun, which was from October 1974 through June of 1978. The Sun was founded by Jeff Nightbyrd and Michael Eakin. They were joined later by printer and bon vivant J. David Moriaty as managing editor, The Sun transcended the usual mode of underground newspapers with professional layouts, cutting edge news articles and, wonder of wonders, paid staff positions.

The exhibit features a selection of newspaper covers along with accompanying articles, photographs, and comments by Jeff Nightbyrd, Dave Moriaty, and some of the key staffers. The show also includes a striking selection of vintage photographs.

“Rehearsals For The Apocalypse: The Austin Sun Years 1974- 1978″ will run from September 11th through October 23rd. The South Austin Popular Culture Center is located at 1516-B South Lamar Boulevard in Austin. Hours are Thursday through Sunday from 1- 6 p.m. or by appointment and chance.

4 Responses to Jeffrey Nightbyrd : Rehearsals for the Apocalypse