Jenn Lewis :
METRO | Homes for the brave? A vet’s story

I was officially a homeless military veteran in the otherwise vibrant city known as Austin. 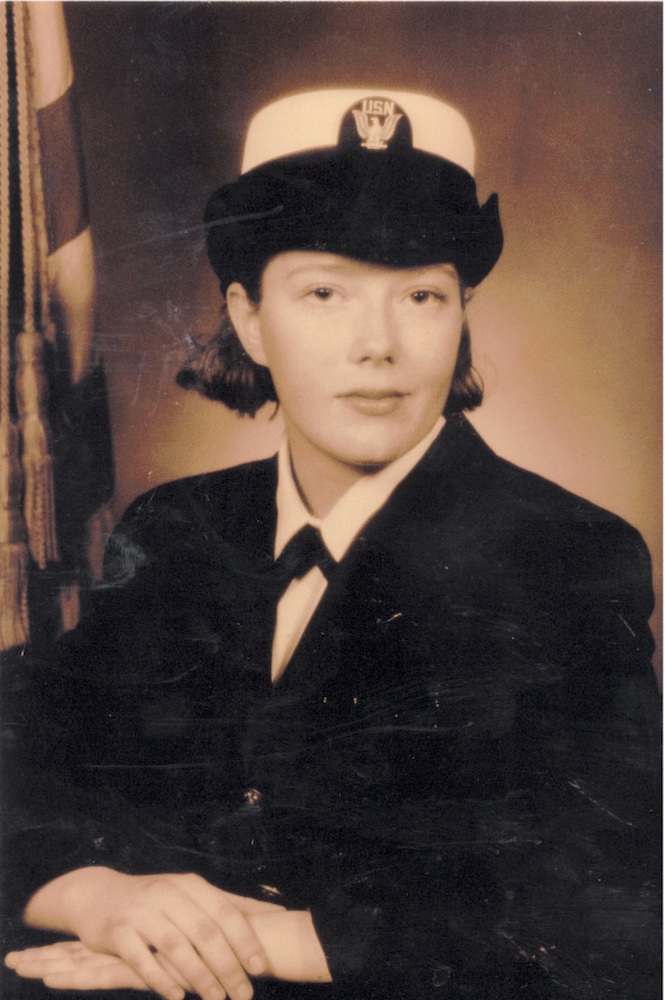 AUSTIN — Confucius once said, “Our greatest glory is not in never falling, but in rising every time we fall.”

I fell and had a very hard time rising for a few months in 2014. After struggling to find a steady job in New England, Austin beckoned me with its allure of great music, culture, and economy. However, when I arrived I seemingly had no real opportunities in the “shining city of the New South.”

Every open door I found slammed in my face. There was no window. I wasn’t sure how I was going to eat, let alone where I was going to sleep, and all I could do was muster enough energy to put my body into survival mode, keep my spirit alive, and search for help among the visible people. I hoped that somehow the proverbial “they” could look past their prejudices and the stigma that surrounds homeless people — enough to help me. After all, I was once considered visible.

I had to make the toughest phone call of my life.

There I was. I had to make the toughest phone call of my life and ask the Veteran’s Affairs homeless program counselor to find me a place to live. I served in the U.S. Navy as a journalist from 1999-2003. During that period I was taught to be self-sufficient, persevering, and responsible.

To me, it was almost unbearable to have fallen that far down and not to be able to get myself back up. I reluctantly stumbled into the most humble version of myself I had ever known. I was officially a homeless military veteran in the otherwise vibrant city known as Austin. And to make matters worse, I was constantly judged and stereotyped because of it.

The numbers behind the faces

A January study by a homeless advocacy group indicated that there were 1,877 homeless people in Travis County, with 200 veterans who still needed housing in Austin. Veterans face special problems: The National Coalition for Homeless Veterans says that an extreme shortage of affordable housing, a lack of job training, and poor access to health care — especially for post-traumatic stress disorder and substance abuse — all contribute to the woes faced by former military members.

I decided to go straight to the top, to the mayor.

I decided to go straight to the top, to the mayor, for his take on what Austin is doing to help the men and women who served our nation.

When I first met Mayor Steve Adler, I was expecting a well-versed, if not rehearsed, politician with an entourage; but instead I met a down-to-earth guy who sat comfortably relaxed in the back of a local cafe and enthusiastically told me about his homeless veteran initiatives.

In a nutshell, he wanted landlords, business leaders, and service providers to work together toward the common goal of finding homes for all homeless veterans in Travis County by the end of 2015.

What really caught my attention though was Adler’s description of the “honor flight,” a program that provides free flights to veterans to see memorials in D.C. Adler traveled on one flight with about 50 WWII veterans. During this 36-hour trip he said that the night they stayed in the Capital, the veterans started telling their war stories.

“I saw my father in those guys,” said Adler, whose father served in the Navy during WWII.

‘Everybody was crying on the flight
back,’ Adler said.

Another memory stuck in his mind. On the flight back to Austin, some of the veterans began reading aloud from letters they had received from their children and grandchildren, telling the veterans how much their service was appreciated. “Everybody was crying on the flight back,” Adler said, pausing for a second. “It was touching.”

I asked him if he was emotional during the flight. He smiled and quietly replied, “Yes, everybody was in that moment.” 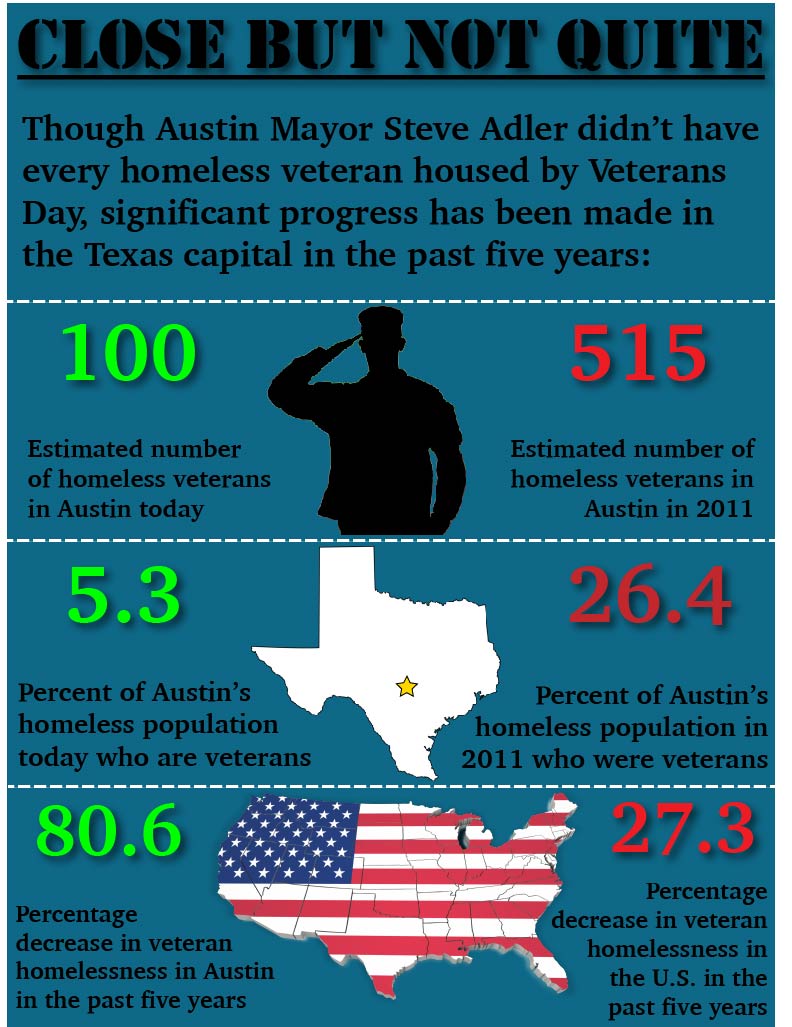 Meet some of the providers

Green Doors is a nonprofit organization that has been offering safe, stable, and affordable housing to low-income individuals and families in Austin for 25 years. Green Doors’ mission is to help end homelessness among veterans and others who are working toward achieving independent living.

Andrea Garcia, Senior Housing Manager for Green Doors, can see the palpable difference when a veteran is told they have a bit of hope, in the form of a place to live:

Lives are transformed, both the residents as well as Green Doors’ staff. It is really powerful when all of a sudden the question of where will I sleep tonight already has an answer, a very positive answer. We tend to take for granted the fact that we have a roof over our heads; however, when that is gone, the world all of a sudden has a complete different meaning and priorities shift.

Garcia says the issues in Austin are varied: “There are so many things that can be done: education, advocacy, understanding, tolerance, flexibility and care. There tends to be a misconception regarding homelessness. It can truly happen to anyone.”

‘A whole lot of human beings are a paycheck away from becoming homeless.’

She continues, “People need to know that a whole lot of human beings are a paycheck away from becoming homeless.”

Foundation Communities is another local nonprofit created to provide affordable and stable housing for veterans, seniors, and people with disabilities. It has provided 2,700 apartments in 18 housing communities since 1990.

Foundation Communities sees its mission as a way of honoring veterans. Forty of the 120 residents at their most recent building, known as Capital Studios, are veterans.. “I think that most people feel like since veterans have served our country, we owe them a decent place to live when they return [from overseas]. We know the model works; we help with employment needs, help lives become more stable, and help vets move towards better health,” Julian Huerta, executive director at Foundation Communities, explained.

One new Foundation Communities property is being developed and will open soon. Three more are in the works and will be completed by the end of 2016, providing 500 more units.

In 2003, Clarence Lowe had just been laid off from a small cyber security communications company in New York and decided to try his luck in San Antonio. An Air Force veteran, he had once been stationed there and had a hunch it might work out. Then his car broke down, along with his spirit, in the middle of a broiling August. No job, no home, no support network, and no future; life wasn’t going according to plan.

“You can imagine the heat in San Antonio at that time, my family’s hungry and I had this heavy burden of not being able to provide for them. The only thing that saved me was there was still a small flickering [inside] knowing I am better than this. I am not this failure,” Clarence remembered.

He commented on the difficulty of not being self-sufficient. “I’ve always been a good planner; a good problem solver. It was the first time I didn’t have an answer, no solution to anything. I had an epiphany which was that I have no answers and am entirely weak and I need some help,” he said.

He helped himself by formulating a
plan to help others.

He helped himself by formulating a plan to help others. Clarence started a business to help people in the same situation.

Now 52, he has been the CEO for StarForce which is a company dedicated to personal and professional development. Over the last nine years, he has worked with approximately 10,000 veterans, helping them get off the streets and into homes with successful lives; using his story to inspire.

During a course Lowe taught to veterans in the Dallas area, a young homeless vet cried during the class. The man was orphaned by his mother, molested by his grandfather until he was 11, and sent to live in a crack house. He joined the military and was sent into a war zone which exacerbated his already indelible mental wounds. He was addicted to heroin, homeless and downtrodden, after an unsuccessful suicide attempt.

Clarence commented further on the tragic, but ultimately uplifting story, “I am like his surrogate family. I love him even if he fails. A powerful force in change is loving someone beyond their performance.”

In time, with work, the veteran found a purpose counseling others in similar situations.

I can relate to his search for meaning, for a home, for a purpose. I also took one of Lowe’s courses. I’ve learned to have hope. And perhaps that hope will extend to veterans in Austin and the people who profess to help them — from the mayor, to advocates, to some landlords who believe in affordable housing.

[Jenn Lewis, who served in the U.S. Navy as a journalist from 1999-2003, is a writer, photographer, and aspiring documentarian. She is a graduate student in the School of Journalism at the University of Texas at Austin.]

1 Response to Jenn Lewis :
METRO | Homes for the brave? A vet’s story