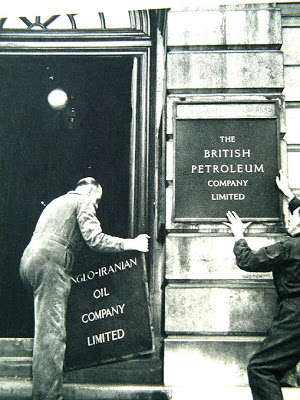 Gosh, how quickly things turn. One day, you’re a strutting peacock — the next day, you’re just another gasping, oil-covered bird.

In early April, BP was strutting about in full corporate splendor, showing off the $9 billion in profits that it had soaked up in just the first three months of this year. It was also basking in a corporate re-imaging campaign, depicting itself as a clean-energy pioneer and declaring that BP now stood for “Beyond Petroleum.”

Since its Gulf of Mexico well blew out on April 20, however, BP has proven to be beyond belief. The wider and deeper that this catastrophe spreads, the more we discover just how oily this giant is.

From the time it was known as the Anglo-Persian Oil Company [later renamed the Anglo-Iranian Oil Company] and set out to grab and control the rich petroleum reserves owned by what is now Iran, BP has been a recidivist global criminal. In the past three decades, it grew huge by swallowing such competitors as Standard Oil of Ohio, Amoco, and Arco. Along the way, it has been implicated in bribery, overthrowing governments, plunder and money laundering, plus having established one of the worst safety and environmental records in an industry that is notoriously reckless on both counts.

And now, its rap sheet grows almost daily. In fact, the Center for Public Integrity has revealed that the oil giant’s current catastrophic mess should come as no surprise, for it has a long and sorry record of causing calamities.

In the last three years, the center says, an astonishing “97 percent of all flagrant violations found in the refining industry by government safety inspectors” came at BP facilities. These included 760 violations rated as “egregious” and “willful.” In contrast, the oil company with the second-worst record had only eight such citations.

While its CEO, Tony Hayward, claims that its gulf blowout was simply a tragic accident that no one could’ve foreseen, internal corporate documents reveal that BP itself had been struggling for nearly a year with its inability to get this well under control. Also, it had been willfully violating its own safety policies and had flat out lied to regulators about its ability to cope with what’s delicately called a major “petroleum release” in the Gulf of Mexico.

“What the hell did we do to deserve this?” Hayward asked shortly after his faulty well exploded. Excuse us, Tony, but you’re not the victim here — and this disaster is not the work of fate. Rather, the deadly gusher in the gulf is a direct product of BP’s reckless pursuit of profits. You waltzed around environmental protections, deliberately avoided installing relatively cheap safety equipment, and cavalierly lied about the likelihood of disaster and your ability to cope with it.

“It wasn’t our accident,” the CEO later declared, as oil was spreading. Wow, Tony, in one four-word sentence, you told two lies. First, BP owns the well, and it is your mess. Second, the mess was not an “accident,” but the inevitable result of hubris and greed flowing straight from BP’s executive suite.

“The Gulf of Mexico is a very big ocean,” Hayward told the media, trying to sidestep the fact that BP’s mess was fast becoming America’s worst oil calamity. Indeed, Tony coolly explained that the amount of oil spewing from the well “is tiny in relation to the total water volume.” This flabbergasting comment came only two weeks before it was revealed that the amount of gushing oil was 19 times more than BP had been claiming.

Eleven oil workers are dead, thousands of Gulf Coast people have had their livelihoods devastated and unfathomable damage is being done to the gulf ecology. Imagine how the authorities would be treating the offender if BP were a person. It would’ve been put behind bars long ago — if not on death row.

[National radio commentator, writer, public speaker, former Texas Agriculture Commissioner, and author of the book, Swim Against The Current: Even A Dead Fish Can Go With The Flow, Jim Hightower has spent three decades battling the Powers That Be on behalf of the Powers That Ought To Be — consumers, working families, environmentalists, small businesses, and just-plain-folks.]