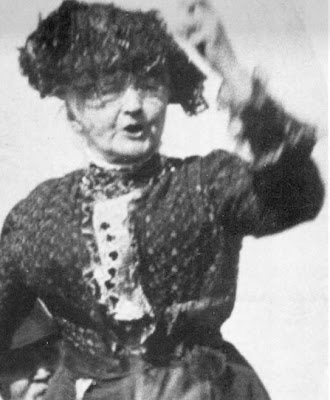 Talking populist? Here’s the real thing: Progressive labor leader and community organizer Mother Jones.
‘Living in a small town and being able to field dress a moose does not make Palin a populist, no matter how much pundits want to pretend it does’
By Jim Hightower / September 11, 2008

It was not my intention to be writing about Sarah Palin, since everyone with a laptop, a No. 2 pencil or a red crayon seems to be covering that beat. But then came the pundits:

“Perfect populist pitch,” beamed CBS analyst Jeff Greenfield right after Palin’s big speech at the GOP fawnfest in St. Paul. In his less infatuated moments, Greenfield surely must realize how ludicrous his comment was, since once, long ago, he co-authored a book that had “populist” in the title, so he has at least had a brush with the authentic people’s movement that the term encapsulates.

So they made me do it. Karl, Jeff and other pundits who are rushing to place the gleaming crown of populism atop the head of this shameless corporate servant — they are the ones who have driven me to write about Palin. Someone has to nail the media establishment for its willing perversion of language, American history and the substance of today’s genuine populism.

Palin might be popular, she might be able to field dress a moose, she might live in a small town, she might enjoy delivering “news flashes” to media elites, she might even become vice president — but none of this makes her a populist. To the contrary, she is to populism what bear is to beer, only not as close.

You want a taste of the real thing? Try this from another woman who hailed from a town (smaller than Wasilla, Alaska) and was renowned for her political oratory:

There are thirty men in the United States whose aggregate wealth is over one and one-half billion dollars. There are half a million looking for work. … We want money, land and transportation. We want the abolition of the National banks, and we want the power to make loans direct from the government. We want the accursed foreclosure system wiped out. … We will stand by our homes and stay by our firesides by force if necessary, and will not pay our debts to the loan-shark companies until the Government pays its debts to us.

The people are at bay, let the bloodhounds of money who have dogged us thus far beware.

That, my media friends, is populism. It comes from Mary Ellen Lease, who was speaking to the national convention of the populist party in Topeka, Kan., in 1890. In a time before women could vote, Lease traveled the countryside to rally a grassroots revolt against the corporate predators of her day, urging farmers to “raise less corn and more hell.” She didn’t need to brag that she was a pit bull in lipstick, because her message, idealism and actions made her an actual force for change.

Populism was and is a ground-level, democratic movement with the guts and gumption to go right at the moneyed elites. It is unabashedly class-based, confronting the Rockefellers on behalf of the Littlefellers. To be a populist is to challenge the very structure of corporate power that is running roughshod over workers, consumers, the environment, small farmers, poor people, the middle class — and America’s historic ideals of economic fairness, social justice and equal opportunity for all.

“Populist” is not an empty political buzzword that can be attached to someone like Palin, whose campaigns (lieutenant governor, governor and now Veep) are financed and even run by the lobbyists and executives of Big Oil, Wall Street bankers, drug companies, telecom giants and other entrenched economic interests.

Populists don’t support opening our national parks and coastlines to allow the ExxonMobils to take publicly owned oil and sell it to China. Palin does. Populists favor a windfall profits tax on oil companies that are robbing consumers at the pump while milking taxpayers for billions of dollars in subsidies. Palin doesn’t. Populists don’t hire corporate lobbyists to deliver a boatload of earmarked federal funds, then turn around and claim to be a heroic opponent of earmarks. Palin did. Populists favor shifting more of America’s tax burden from the middle class to the superwealthy, while opposing another huge tax giveaway for corporations. Palin doesn’t and doesn’t.

Another thing populists don’t do is sneer at community organizers, as Palin did in her nationally televised coming-out party. Indeed, populists of old were community organizers, as are today’s. They work in communities all across our great land, putting in long days at low pay to help empower ordinary folks who are besieged by the avarice and arrogance of Palin’s own corporate backers. Since the governor likes to put her fundamental Christianity on political display, she might give some thought to a new bumper sticker that expresses a bit of Biblical populism: “Jesus was a community organizer while Pontius Pilate was governor.”

What gives Palin any legitimacy to denigrate that? She embraces none of these causes, instead supporting the rich and powerful whom grassroots folks are having to battle. She’s a plutocrat, not a populist. Big difference.

[Texas populist Jim Hightower is a national radio commentator, writer, public speaker and author of the new book, “Swim Against the Current: Even a Dead Fish Can Go With the Flow” (Wiley, March 2008). He publishes the monthly “Hightower Lowdown,” co-edited by Phillip Frazer.]