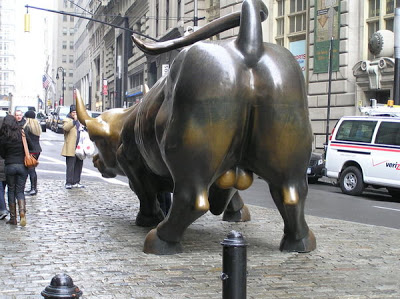 ‘As a consequence of their avaricious grab for outrageous personal enrichment during the past decade, these arrogant titans of financial gimmickry have caused a vast economic collapse…’

Why Is the Government Hell-Bent on Rewarding Greed, Incompetence and Narcissism?

Washington shouldn’t reward Wall Street’s culture of excess. Instead, it should insist that those who wrecked the economy be fired.

Bankers have never been much loved, but gollies, this Wall Street bunch seems hell-bent on being loathed.

As a consequence of their avaricious grab for outrageous personal enrichment during the past decade, these arrogant titans of financial gimmickry have caused a vast economic collapse that is presently costing million of Americans their homes, jobs, pensions and dreams — while also bringing down the banks themselves.

As you would expect, the Wall Streeters who did this to us are now humbled and filled with deep remorse. HA! Just kidding.

Instead, the perpetrators keep grasping for all they can get, taking no responsibility for the damage they’ve done. Obtuse? Self-indulgent? Narcissistic? What’s with these people? A few examples of their bloated sense of entitlement:

• While Merrill Lynch was imploding last year, requiring a $25 billion salvage job from us taxpayers, CEO John Thain was merrily spending $1.2 million to redecorate his office, including buying a $13,000 “custom” coffee table, a $1,400 wastebasket and a $35,000 antique commode (add your own toilet joke here).

In such tough times, why didn’t he just make do with the perfectly luxurious office of his predecessor?

“Well … his office was very different than the … the general decor of Merrill’s offices,” Thain told a CNBC interviewer. “It really would have been … very difficult … for … me to use it in the form it was in.”

• Citigroup, which lost $28 billion in the past 15 months, has now received a $345 billion bailout from Washington. Time to cut nonessential spending, right? Yes — as long as “essential” includes a new $50 million Dassault Falcon 7X jet for top executives.

Never mind that the bank already has five executive jets in its fleet. It took a public expression of outrage from President Barack Obama to get Citigroup’s honchos to back off this extravagance, and it’s said that they’re still sulking about it.

• Despite their historically disastrous year in 2008, Wall Street investment bankers awarded themselves a total of $18.4 billion in bonuses — the sixth-largest payout on record! Shouldn’t they be embarrassed, you ask? Of course, but a January poll of the bankers found that 46 percent of them felt they deserved a bigger bonus.

By the way, the Street’s rationalization for such giveaways is that top bankers must be showered with treasure in order to keep them hitched to the corporate plow. “Retention bonuses,” they’re called. Merrill Lynch’s Thain, for example, doled out $4 billion in bonuses last fall while the firm was awaiting its bailout check, explaining that it’s essential to “pay your best people,” or they’ll leave.

Shouldn’t he have to wear a clown costume when saying silly stuff like that? Leave to where? The whole Street is on fire. Besides, these are the geniuses who lit the match — who would want them?

Which brings us to the “Obama stage” of the banker bailout. At its core, his plan looks like more of the same. The government (you and I) will buy the bad loans now held by the banks, paying an inflated value for them. This gift will make us by far the biggest investor in Wall Street — yet, even though we’re putting up the capital, Obama’s team does not require a commensurate decision-making role for the public.

One decision in particular needs our say-so: Who’s going to manage the money? Under Obama’s plan, the same old obtuse, self-indulgent, narcissistic — and failed — bankers would keep their jobs and control the bailout. It seems the president’s top economic advisors, Timothy Geithner and Lawrence Summers, don’t have the stomach for the real housecleaning needed to set Wall Street right. Instead, they cower behind knee-jerk ideological platitudes, scoffing that “governments make poor bank managers.”

Hello? It’s hard to be a poorer manager of America’s financial system than the current group of greed-headed “free marketers.” They lost hundreds of billions of dollars in bank assets during the past year or so, wrecking our economy in the process, and now they want to be rescued.

Rescue the system, yes. But not those who wrecked it. Wall Street’s culture of excess should not be rewarded, and any bailout should begin by insisting that all of those who did this to America be fired.