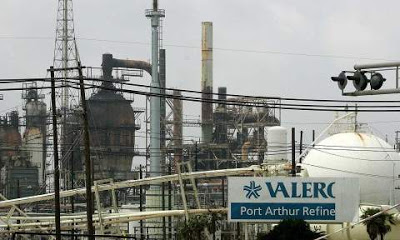 For Rep. Allen West, the skyrocketing price of gasoline is not just a policy matter, it’s a personal pocketbook issue. The Florida tea-party Republican (who, of course, blames President Obama for the increase) recently posted a message on Facebook wailing that it’s now costing him $70 to fill his Hummer H3.

It’s hard to feel the pain of a whining, $174,000-a-year Congress-critter, but millions of regular Americans really are feeling pain at the pump — especially truck drivers, cabbies, farmers, commuters,and others whose livelihoods are tethered to the whims of Big Oil.

It’s an especially cynical political stunt, then, for congressional Republicans, GOP presidential wannabes, and a chorus of right-wing mouthpieces to use gas price pain as a whip for lashing out at Obama’s January decision to reject the infamous Keystone XL pipeline.

This friendly Canadian corporation, they cried, would send 700,000 barrels of “tar sands crude” oil per day through the 2,000-mile-long pipeline that it would build from Alberta, Canada, to Texas refineries on the Gulf Coast. “Less dependence on OPEC,” they chant like a mantra, “more gasoline for America, lower prices for consumers.”

Well, aside from inevitable environmental damage from pipeline leaks, and the fact that this foreign-owned corporation would use the autocratic power of eminent domain to take land from unwilling sellers along the 2,000 mile route, here’s something not to like: The gasoline and diesel that would be made from this Canadian crude would not go to American gas pumps, but to foreign markets.

The dirty little secret that those pushing so urgently for building Keystone XL don’t want you to know is that the tar sands oil producers are in cahoots with Texas refineries to move the product onto the lucrative global export market, selling it to buyers in Europe, Latin America and China — not to you and me.

The pipeline and the toxic crude it would carry across six states would do absolutely nothing to shave even a penny off of the price we pay at the pump.

Already, U.S. refineries are exporting record amounts of the gasoline they make. For the first time in 62 years, America is now a net petroleum exporter. Valero Energy Corp., the largest U.S. exporter of refined petroleum products, is a major lobbyist for Keystone XL.

Along with Motiva (an oil refiner jointly owned by Shell and Saudi Aramco) and Total (a French refinery), Valero has signed secret, long-term contracts with Keystone’s owner (TransCanada Corp.) and several tar sands oil producers to bring this crude to Port Arthur, Texas. All three have upgraded their refineries there to process diesel for export.

Adding to Big Oil’s enjoyment is the fact that the Port Arthur refineries of Valero, Motiva, and Total are within a Foreign Trade Zone, giving them special tax breaks for shipping gasoline and diesel out of our country.

And adding to the dismay of some U.S. consumers, TransCanada has quietly boasted that Keystone XL would cut gasoline supplies in our Midwestern states, thus raising prices at the pump and siphoning more billions of dollars a year from consumers pockets into the vaults of multinational oil interests.

So, lets tally the score in this Keystone pipeline deal: The American people’s environment would be put at risk, foreign nations would get the fuel, pipeline and oil investors would get the tax-subsidized profits, and we’d all stay hooked on deadly polluting oil.

Meanwhile, the financial speculators and supply manipulators who are artificially causing our gasoline prices to rise escape scrutiny, while self-serving politicians (tanked up on Big Oil’s and Wall Street’s campaign cash) divert attention to the bugaboo of Obama’s pipeline decision.

And, yet again, our nation has an excuse to postpone the necessary investments in conservation, alternative fuels, and mass transit that would actually solve the gas-gouging problem.

[Jim Hightower, a radio commentator, writer, public speaker, and former Texas Agriculture Commissioner, edits the populist newsletter, The Hightower Lowdown. This article was published by Creators Syndicate and distributed by Reader Supported News. Read more articles by and about Jim Hightower on The Rag Blog.]