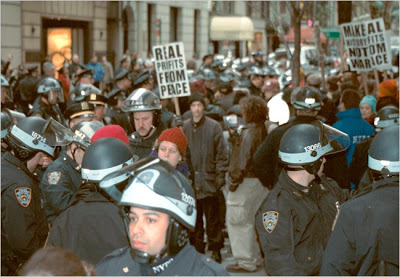 A mass arrest under way at an antiwar protest in Manhattan on April 7, 2003. Convictions: zero. Cost: $2 million. Photo by Dawn Reel / NYT.
Running a police state is expensive
By Jim Hightower / September 2, 2008

To your list of reasons not to support a police state in America, add this one: It’s expensive.

I’m not talking about the obvious costs of deploying police agents in high-tech riot gear, the tab for prison cells, and whatnot. Rather, I’m talking about paying for lawyers, court costs, and the inevitable damage awards to the people whose rights get trampled. It happens again and again in our country that politicians get spooked when We The People dare to protest their policies, so they resort to the brute force of a police crackdown – essentially using an ax to peel a grape. What they forget in their rush to crush is that America – thank goodness – has a Bill of Rights.

The latest to learn this are New York City officials who unleashed the police state on war protesters in April 2003, right after George W invaded Iraq. Mayor Mike Bloomberg sent the helmeted and booted NYPD to bust a gaggle of peaceful protesters in Midtown Manhattan. They encircled, arrested, and jailed 52 of these citizens, charging them with the heinous crime of “blocking pedestrians.”

But, wait: there were videos of the protest! And – guess what? – no pedestrians had been blocked, and the Republic was not at all endangered by this exercise of First Amendment rights. Yet, city prosecutors pushed hard, spending more than a million dollars of taxpayer funds to try to imprison innocent Americans. Their case was so weak, however, that only two protesters were even brought to trial, and both were found innocent. The other 50 had their charges dropped, and now – five years later – the city has had to pay more than two million dollars to settle the case.

Politicians like Bloomberg are wiping their feet on our Constitution by jailing legitimate protestors – then taxing you and me to cover up their mistakes.