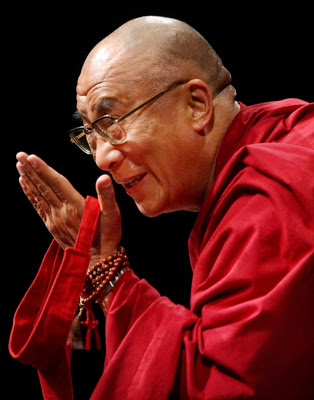 Last Monday the Dalai Lama posted on his Facebook blog:

All the world’s major religions, with their emphasis on love, compassion, patience, tolerance, and forgiveness can and do promote inner values. But the reality of the world today is that grounding ethics in religion is no longer adequate. This is why I am increasingly convinced that the time has come to find a way of thinking about spirituality and ethics beyond religion altogether.

Religion has always been the lamp, it has never been the flame. Religion is whatever skillful means we use to remember we are all interconnected. It is whatever practice we use to stay grateful and alert. Unfortunately those who do not fall asleep into religion are rare.

I doubt the Dalai Lama was actually calling for the end to those disiplines that brought him to this clarity, but I do think he was realizing that religion that does not die into compassion, becomes a hindrance. He is calling for a new way of speaking about ethics.

I began this blog in part because I believe we are living at the death of an old worldview and the birth of a new. After Galileo, Darwin, and Einstein, much of what we once called ”religion” lies in ashes. But it is the nature of human understanding to die and then rise from the ashes.

There is a growing realization that something is being born in between what we call “religion” and what we call “atheism.” It is a Colossus with the clarity of a scientist and the reverence of a mystic. We do not yet have words for it, but I personally find it a thrilling time to be alive.

[Rev. Jim Rigby, a human rights activist, is pastor of St. Andrew’s Presbyterian Church in Austin, Texas. Jim Rigby blogs at jimrigby.org. He can be reached at jrigby0000@aol.com, and videos of his sermons are available online here. Read more articles by Jim Rigby on The Rag Blog.]