Jim Turpin : Cutting Through the ‘Fog of War’ 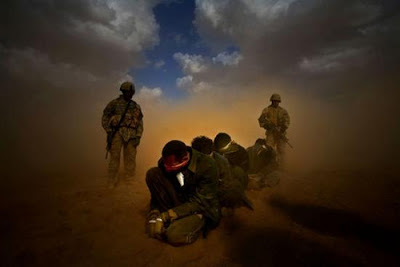 The chain of command gave orders to fire indiscriminately at civilians even when soldiers made efforts to refuse such orders.

The “fog of war” is defined as the ambiguity of situational awareness by participants in military operations. This term is attributed to Prussian military analyst Carl von Clauswitz who stated:

The great uncertainty of all data in war is a peculiar difficulty, because all action must, to a certain extent, be planned in a mere twilight, which in addition not infrequently — like the effect of a fog or moonshine — gives to things exaggerated dimensions and unnatural appearance. (Clauswitz, On War, Book 2, Chapter 2, Paragraph 24)

U.S. combat operations in both Iraq and Afghanistan are approaching the 10-year mark and recent release of classified documents through WikiLeaks has used a floodlight to cut through the “fog of war” and expose the brutality imposed on civilian populations in both of these conflicts.

Three soldiers from this company (McCord, Stieber and Corcoles) report such incidents as:

Corcoles describes the first IED death his unit suffered. “We did a mission that night till like midnight, and we were actually just sitting down… I hadn’t even got three or four drags off my cigarette and an IED went off… We watched the Humvee burn, but we didn’t realize [someone] was still in it.”

The IED attacks left the soldiers angry and scared. McCord recalls one mission to impose curfews. Earlier that day, a popular soldier had died in an IED attack, and the troops took it out on the Iraqis. “There were a lot of people who got beat up that night,” he says bluntly.

This anger was turned into policy by the chain of command. “We had just lost three guys to an IED when the battalion commander came out to the COP (Combat Outpost),” says McCord. He went on to explain that the commander gave orders to shoot indiscriminately after IED attacks. “He said, ‘Fuck it, this is what I want… anytime someone in your line gets hit by an IED.. .you kill every motherfucker in the street,” McCord testifies.

“When one [IED] went off, you were supposed to open fire on anybody,” says Stieber. “At first I would just fire into a field. Then I wouldn’t fire at all.” He describes an IED that went off near a crowd of teenagers. “I said I wouldn’t fire,” even though “other people were firing,” he recalls.

Like Stieber, Corcoles describes incidents in which he purposely aimed his gun away from people. “You don’t even know if somebody’s shooting at you,” he says. “It’s just insanity to just start shooting people.” Stieber pointed out that in incidents like these, it was very rare for U.S. military vehicles to stop to help the wounded or assess how many people had been injured or killed.

Stieber was intimidated and reprimanded by his command for refusing orders to shoot. “One time when I didn’t fire, people in my truck were yelling at me for the rest of the mission. When we got back, one or two leaders got up in my face and kept yelling at me and stuff,” he says. The command eventually stopped sending him on missions as a gunner, and Stieber says he “faced a lot of criticism for it.”

Corcoles saw this too. “One night our truck got hit by an IED and Josh didn’t fire, and another soldier didn’t fire,” he says. “And they were getting yelled at: ‘Why aren’t you firing?’ And they said, ‘There’s nobody to fire at.'”

Clearly, there is no ambiguity in this scenario. The chain of command gave orders to fire indiscriminately at civilians even when soldiers made efforts to refuse such orders. This is most likely a very commonly occurring situation in both theaters of conflict for our soldiers.

Anger and frustration remain for soldiers in the field with June 2010 being the highest casualty rate since the beginning of the Afghanistan conflict for coalition forces with July being on track to possibly exceed this number when count is completed.

This begs the question of why do we continue to put our soldiers in impossible scenarios with large civilian populations that result in deaths and injuries to the very people we are “liberating”?

The “rules of engagement” or basically when to pull the trigger is a delicate balance for any soldier in any combat situation. The present U.S. counterinsurgency (known as “COIN”) presents great difficulties for soldiers in the field. COIN is predicated on “winning hearts and minds” of the civilian population and this is not typically achieved through indiscriminate weapons fire or drone missile strikes on unarmed civilians.

General Petraeus was recently discussed in a Salon article as reviewing the “rules of engagement”:

Petraeus also has to appear to stay the course in terms of counterinsurgency (COIN) fundamentals, such as making extensive efforts not to kill innocent people. The tricky part is that the main argument against McChrystal’s rules of engagement is not that they are too bureaucratic; it’s that they are overreaching and potentially dangerous.

So, the maddening choice by soldiers of firing or not firing on civilian populations always remains. It seems the easy choice is simply not to have combat operations in either Iraq or Afghanistan.

The recent Wikileaks release of over 90,000 classified documents details Afghan corruption, the use of Stinger surface-to-air missiles by the Taliban, U.S. assassination teams, and large numbers of civilian deaths.

But a more chilling Wikileaks release in April 2010 is of an Apache helicopter video clip from July 2007 of 30mm cannon fire cutting down two Reuters reporters and killing 10 civilians. For those that have seen this video, its’ horror and nonchalance are breathtaking. It is impossible to describe and requires that you grit your teeth to watch. It is worth noting that the same company (Bravo 2-16) that was described earlier was also involved in this operation. So death occurred from above and below simultaneously for the civilian populations in this area.

Other than “rules of engagement” and other military protocols, what environmental factors drive this brutal behavior towards civilians in war zones? Which is the “chicken” and which is the “egg”?

Why is indiscriminate fire on civilians so prevalent in Iraq and Afghanistan?

The answer lies in the repeated deployment of U.S. military personnel to both Iraq and Afghanistan.

The continuous exposure to combat trauma has led to dramatic increases in the number of post-traumatic stress disorder (PTSD) cases. Since October 2001, with almost 1.8 million U.S. service personnel serving in Iraq and Afghanistan, the VA has predicted 10-18% have PTSD, or 324,000 individuals.

Even this number may be considered low, with a recent American Journal of Public Health article showing a tripled risk of PTSD for New Jersey based National Guardsmen with repeat deployments.

In past U. S. wars, PTSD was called “soldiers heart” during the Civil War, in WW I it was named “shell shock” and by WW II, “combat fatigue” or “exhaustion.” It is only on recent years that PTSD in combat zones has been fully understood and recognized by both the military and psychiatric experts.

Diagnostic symptoms of PTSD include the following: re-experiencing the original trauma(s) through flashbacks or nightmares, avoidance of stimuli associated with the trauma (certain thoughts or feelings associated with an event), and increased arousal such as difficulty falling or staying asleep, or problems with anger, concentration, or hypervigilance. (American Psychiatric Association’s Diagnostic & Statistical Manual of Mental Disorders IV [DSM- IV] 1994).

The symptoms of avoidance, anger, and hypervigilance are all a psychological witches’ brew in combat situations and ensure brutality towards civilian populations.

Another outcome has been suicides which are tracking at the highest point in the U.S. Army since the 1970’s. Thirty-two soldiers took their own lives In June 2010, the most Army suicides in a single month since the Vietnam era. Eleven of the soldiers were not on active duty. Of the 21 who were, seven were serving in Iraq or Afghanistan.

In my recent volunteer work at Under the Hood Café and Outreach Center at Ft. Hood in Killeen, Texas, I have had the opportunity to speak to many active duty soldiers and veterans of both the Iraq and Afghanistan conflicts. Under the Hood is a non-military environment for active duty and veterans to speak out on the effects of war and offers referral to legal and psychological services for all who come through the door, including those active duty soldiers who are war resisters and have refused to re-deploy to Afghanistan.

Their stories are similar to the ones above and detail heart rending experiences of personal trauma, loss, and pain in their own way much like the testimonies at Winter Soldier.

The original Winter Soldier was testimony organized in 1971 by Vietnam Veterans Against the War (VVAW) as a challenge to the morality and conduct of the Vietnam War, with the goal of publicly exposing war crimes and atrocities by the United States Armed Forces.

On the fifth anniversary of the Iraq invasion in March 2008, the Iraq Vets Against the War resurrected Winter Soldier as a forum where more than 200 U.S. military veterans and active duty soldiers as well as Iraqi and Afghani citizens gave testimony on the conflicts in both countries.

“I remember one woman walking by,” said Jason Washburn, a corporal in the U.S. Marines who served three tours in Iraq. “She was carrying a huge bag, and she looked like she was heading toward us, so we lit her up with the Mark 19, which is an automatic grenade launcher, and when the dust settled, we realized that the bag was full of groceries. She had been trying to bring us food and we blew her to pieces.”

“During the course of my three tours, the rules of engagement changed a lot,” Washburn’s testimony continues. “The higher the threat the more viciously we were permitted and expected to respond.” (9/20/2008 — Asian Times, Book Review (Dahr Jamail): Winter Soldier: Iraq and Afghanistan by Aaron Glantz)

Whether U.S. brutality against civilians in war zones occurred in Vietnam, Iraq, or Afghanistan, the common themes remain the same: soldiers repeatedly deployed to war zones with heavy civilian populations with no enforced “rules of engagement” resulting in war crimes.

A quote attributed to Joan Baez seems most appropriate:

If it’s natural to kill, why do men have to go into training to learn to do it?

1 Response to Jim Turpin : Cutting Through the ‘Fog of War’