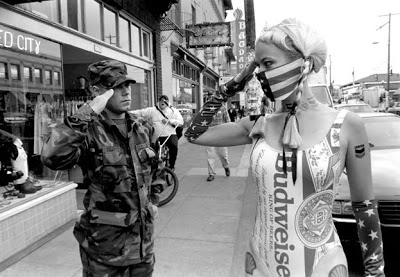 Image from Thomas Paine’s Corner.
Is endless war the American way?
Why militarism permeates our society

Orwell would be proud. The United States is about to begin its tenth year in Afghanistan in an attempt to prove that “endless war” is not only possible, but the accepted norm in American society.

But why has militarism become such an integral part of our political and social lives in this country?

I see three main areas of influence on why we accept the present state of aggressive militarism in this country:

Messaging on war and terrorism, or
Why my brain is always scared

G.M. Gilbert, an American psychologist who interviewed Herman Goering at Nuremberg in his Nuremberg Diary quoted Goering as saying:

…the people can always be brought to the bidding of the leaders. That is easy. All you have to do is tell them they are being attacked and denounce the pacifists for lack of patriotism and exposing the country to danger. It works the same in any country.

The human brain is well constructed to deal with danger and fear on an automated and highly developed level. The amygdala is responsible for both fear conditioning and memory consolidation. These combined are the neurological area of the brain to condition and retain fear memories.

In other words, a sweet spot to frighten at will and control the masses.

The use of the phrase “war on terror” is at best a disingenuous means of simultaneously stimulating the fear response and the use of metaphors that have no real meaning.

The words “terror” and “terrorism” are the most politically manipulated words of our time and may be applied to any country, group or individual you wish to bomb, torture, or indefinitely detain.

It may also be used by the United States to nimbly point out those who are “state sponsors of terrorism,” which presently include Cuba, Iran, Sudan, and Syria. Never mind that we sponsored El Salvadoran death squads or backed the likes of Marcos, Mobutu, Pinochet, or the Shah for decades that led to the torture and death of hundreds of thousands, possibly millions.

Does the mainstream media (MSM) really ignore what is happening or change reality to fit government policy?

As Glenn Greenwald, in a recent Salon article, so succinctly put it:

A newly released study from students at Harvard’s John F. Kennedy School of Government provides the latest evidence of how thoroughly devoted the American establishment media is to amplifying and serving (rather than checking) government officials. This new study examines how waterboarding has been discussed by America’s four largest newspapers over the past 100 years, and finds that the technique, almost invariably, was unequivocally referred to as “torture” — until the U.S. Government began openly using it and insisting that it was not torture… Similarly, American newspapers are highly inclined to refer to waterboarding as “torture” when practiced by other nations, but will suddenly refuse to use the term when it’s the U.S. employing that technique.

Greenwald also points out that such MSM outlets as “the NYT, The Washington Post and NPR explicitly adopted policies to ban the use of the word “torture” for techniques the U.S. Government had authorized, once government officials announced they should not be called “torture.”

Is this the terminology used in the UN Convention against Torture and Other Cruel, Inhuman or Degrading Treatment or Punishment?

This is the document the United States signed in 1988 and reaffirmed in 1994 that defines torture in Article 1.1 as:

Any act by which severe pain or suffering, whether physical or mental, is intentionally inflicted on a person for such purposes as obtaining from him or a third person, information or a confession, punishing him for an act he or a third person has committed or is suspected of having committed, or intimidating or coercing him or a third person, or for any reason based on discrimination of any kind, when such pain or suffering is inflicted by or at the instigation of or with the consent or acquiescence of a public official or other person acting in an official capacity. It does not include pain or suffering arising only from, inherent in or incidental to lawful sanctions.

No exceptional circumstances whatsoever, whether a state of war or a threat of war, internal political instability or any other public emergency, may be invoked as a justification of torture.

Cultural and societal acceptance of war
Or, ‘That’s Militainment!’

“Militainment” or entertainment with military themes is ubiquitous in music, television, movies and video games.

It is even everywhere in clothing. Just look around the next time you walk down the street or go to a clothing store. Desert-style camo wear is EVERYWHERE. Women have camo shorts, men wear camo hats, and even babies have camo bibs and jumpers.

Sears ran a line of clothing in 2008 that “signed a deal with the U.S. Army to launch the All American Army Brand’s First Infantry Division clothing collection. It marks the first time the U.S. Army has officially licensed its marks and insignias; licensing fees will be used to support military programs for troops and their families.

The president of Sears Apparel said the brand will be prominently featured during the retailer’s Fall Forward fashion. The line will also be included in future marketing campaigns, including those slated for the holiday season.

“Over the years, military-inspired clothing has played a distinct role in shaping fashion trends,” Mr. Israel said. “We are now able to exclusively offer a line that is pure to the origins of that inspiration.” (Military.com 9/3/08)

It was repeatedly targeted for protests by those who said the Army’s use of first-person-shooter video games desensitized visitors to violence and enticed teens into the military. Anyone over 13 could play games, though the most graphic ones were restricted to those 18 and older.

War movies and TV specials are making a comeback with The Hurt Locker (2009), Inglorious Basterds (2009), and the HBO special The Pacific (2010) which all sell war as the “Band of Brothers” myth to perpetuate heroism and nationalism.

Justice will be served/ And the battle will rage/ This big dog will fight when you rattle his cage/ And you’ll be sorry that you messed with the U.S. of A./ ‘Cause we’ll put a boot in your ass/ It’s the American Way.

Endless war… It is indeed the “American way.”

4 Responses to Jim Turpin : The Endless War and American Society