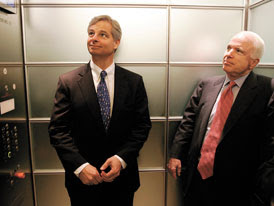 Davis and McCain – but are they going up or down?
The biggest story of the campaign
By Michael Tomasky / September 24, 2008

Mark this day down. Today – last night, actually – the New York Times and Roll Call reported (it’s hard to see who was first) what may be the biggest political story of the campaign. How big? John McCain might have to fire his campaign manager. Big enough?

The story is this. The lobbying firm of Rick Davis, the manager, was being paid $15,000 a month by Freddie Mac until last month. That fact is a direct contradiction of words McCain had spoken Sunday night. At that time, responding to a Times story being prepared for Monday’s paper revealing that Davis had been the head of a lobbying consortium led by Freddie Mac and Fannie Mae until 2005, McCain said Davis had done no further work for either mortgage giant.

Someone’s lying – either Davis to McCain, or McCain to the public. I trust you see the problem here.

The stories are here, by David Kirkpatrick (whose reporting on this topic has been leading the way) and Jackie Calmes of the Times, and here, by Tory Newmeyer of Roll Call. You should definitely read every word of both. I think after you do you’ll agree that, depending on how big the pick-up is today and how hard the Obama camp presses this, it’s pretty difficult to see how Davis can stay on as campaign manager.

The revelations are devastating for two reasons. First, as I noted above, either Davis lied to McCain or McCain lied to the voters. From the Times story:

On Sunday, in an interview with CNBC and The Times, Mr. McCain responded to a question about that tie between Mr. Davis and the two mortgage companies by saying that he “has had nothing to do with it since, and I’ll be glad to have his record examined by anybody who wants to look at it.”

Who lied to whom? This is the kind of thing we might not know for a while, or maybe never. My hunch would be that Davis concealed it from McCain and that McCain, as is his wont, just winged it Sunday night, without really caring whether it was true, because that’s what he does. But let me clearly label that a hunch. I don’t know. But it doesn’t really matter.

The second reason this is devastating is maybe even bigger than the question of the Sunday lie, which is limited in scope after all to a sort of narrow legal question. The second reason is that McCain has been going around putting lobbyists, specifically for F & F, at the heart of the whole problem. This is from the Roll Call piece:

Fannie Mae and Freddie Mac emerged as issues in the presidential race last week because of turmoil in the financial markets. In a radio address from Green Bay, Wis., on Saturday, McCain blamed the companies and their political clout for creating the housing mess now roiling Wall Street. “At the center of the problem were the lobbyists, politicians and bureaucrats who succeeded in persuading Congress and the administration to ignore the festering problems at Fannie Mae and Freddie Mac,” he said. “Using money and influence, they prevented reforms that would have curbed their power and limited their ability to damage our economy. And now, as ever, the American taxpayers are left to pay the price for Washington’s failure.”

I just can’t picture any way of wiggling out of that. He is talking in those sentences about his own campaign manager! And he’s going to be able to keep him on? Strange things happen all the time, but I have trouble seeing it.

Oh and by the way: No wonder Steve Schmidt, another top McCain strategist, said on a Monday conference call with reporters that “Whatever The New York Times once was, it is today not by any standard a journalistic organization.” He obviously knew that more was coming and was trying to lay some discrediting groundwork.

This is a terrible, terrible story for McCain, and yes, the biggest political story of the general-election campaign so far.

1 Response to John McCain Is Just Another Routine Liar