John McMillian : Mac the Knife: The Passing of a War Criminal 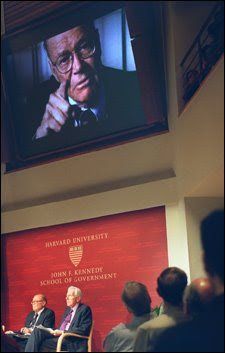 Robert S. McNamara, U.S. Secretary of Defense for Presidents Kennedy and Johnson, speaks at Harvard on March 3, 2004. J. Errol Morris’ Academy Award-winning documentary, ‘The Fog of War,’ plays on the monitor as McNamara (left) and Ernest May address the audience. Photo by Stephanie Mitchell / Harvard News Office.
Mac the Knife

Robert McNamara — debonair, genial and still very lucid at age 87 — sat… before 700 members of the Harvard community, who… ‘received him with courteous applause…’

[Much has already been written about the legacy of Robert McNamara, Secretary of Defense under two presidents and the primary architect of the War in Vietnam, who died this past Monday, July 6. But John McMillian sent us the following remembrance, adapted from a piece he originally wrote for the March 9, 2004, Harvard Crimson, and we think Rag Blog readers will find it especially incisive. John McMillian was an editor of The New Left Revisited and The Radical Reader.]

Growing up, I’ve often lamented that I missed out on the zeitgeist of the 1960s. For better or worse, I think I might have enjoyed the frothy exuberance and moral drama. As an undergraduate in the early 1990s, I even once wrote a fairly maudlin poem that listed all of the things I’d like to have done if I had been alive then. It included such items as looking forward to the next Beatles album, sneaking a sophomore out of her dormitory window after curfew, sitting around the television with my family when Neil Armstrong walked on the moon… and heckling Robert S. McNamara.

I might have had a chance to finally do the latter when the former secretary of defense appeared at the Kennedy School of Government on March 3, 2004, to discuss film clips from Errol Morris’ documentary, The Fog of War. Unfortunately, I arrived just a moment too late to get a seat in the auditorium; the most I could do was watch the video feed from the overflow room. This made the whole occasion seem even more surreal. Robert McNamara — debonair, genial and still very lucid at age 87 — sat just a room away, before 700 members of the Harvard community, who, The Crimson reported, “received him with courteous applause.”

That was a mistake.

Robert McNamara was a war criminal. We need not quibble about this. By his own, well-publicized admission, during World War II both he and General Curtis E. LeMay “were behaving as war criminals” when they incinerated hundreds of thousands of Japanese civilians in massive firebombing raids. If not for the Allied victory, an international war crimes tribunal might have recommended that McNamara be blindfolded and shot. Instead, he got a promotion.

During the eight years that McNamara served as secretary of defense, he helped mastermind the killing of hundreds of thousands of Vietnamese, many of them civilians. Fragmentation bombs, napalm and the chemical weapon Agent Orange were all used to devastating effect. By the time the war ended, at least 2 million Vietnamese had been slaughtered. As McNamara helpfully reminded the Kennedy School crowd, if the U.S. population had suffered an equivalent percentage of losses during that war, 27 million Americans would have been killed. According to the Nuremberg Principles, war crimes include the “wanton destruction of cities, towns or villages, or devastation not justified by military necessity.”

Unlike other famous war criminals, McNamara never tried to deny that he knew about the carnage that was happening under his watch. In a 1967 memo to President Lyndon B. Johnson, he betrayed his discomfiture with his own policy recommendations when he said “there may be a limit beyond which… much of the world may not permit us to go.” With chilling understatement, he continued: “The picture of the world’s greatest superpower killing or seriously injuring 1,000 noncombatants a week, while trying to pound a tiny, backward nation into submission on an issue whose merits are hotly disputed, is not a pretty one.”

How, then, did McNamara rationalize his actions? “I just felt that I was serving at the request of the president, who had been elected by the American people,” he says in The Fog of War. “And it was my responsibility to help him carry out the office as he believed was in the interest of our people.”

McNamara continued to just follow orders even after he’d privately concluded that the Vietnam War could not be won. He also lied repeatedly to Congress about the war. Owing to some absurd genteel code (apparently known only to himself), McNamara argued later that it’s “irresponsible for an ex-Secretary of Defense to comment… about a president who is in the midst of war… ” But even this is a prevarication. At the Kennedy School, McNamara made no secret of his disapproval of President Bush’s foreign policy, and he told Toronto’s Globe and Mail that, “It’s just wrong what we’re doing [in Iraq]. It’s morally wrong, it’s politically wrong, it’s economically wrong.” If ex-Secretary of Defense McNamara could criticize President Bush then, why couldn’t he have spoken out against the Vietnam War in 1968, when doing so might have saved hundreds of thousands of lives?

Journalist Mickey Kaus once asked, “Has any single American of [the 20th] century done more harm than Robert McNamara?” It’s a good question. Although most of us hold it as an article of faith that war criminals ought to be punished, people generally have a hard time holding their own leaders to the same standards of accountability they demand from others. McNamara literally spent his retirement skiing in Aspen and vacationing in Martha’s Vineyard. It would have been more appropriate for him to have been locked away, and shame on the Harvard community for not telling him so.

And McNamara’s Ghosts in Afghanistan by Tom Hayden / The Huffington Post / July 8, 2009