John Ross : An Uprising of Bones in Mexico 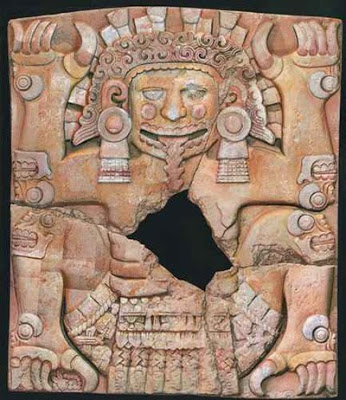 Tlatecuhtli, Aztec goddess of the earth, a fierce frog-like creature. The monumental 12-ton slab was discovered during an excavation beneath a popular Mexico City cantina. Photo from Noticias Azatlan Virtual.
An uprising of bones:
Macabre marks past and present in Mexico

MEXICO CITY — Under the martial cadence of muffled drums, the bones rolled solemnly up the elegant Paseo de Reforma atop a dozen military vehicles. Four skulls could be spotted in one large glass urn. “Look Papi, there goes Hidalgo!” a small boy pointed excitedly — one of the skulls is purported to be that of Miguel Hidalgo, the country priest who rose in rebellion in 1810 to initiate Mexico’s struggle for independence from Spain, an event whose bicentennial is being celebrated this year.

For his efforts, Hidalgo was fusilladed by a Royal firing squad then decapitated and his head hung from a public building to impress upon would-be disciples the folly of rebellion.

Other urns were full of arm bones and femurs, said to be the remains of Jose Maria Morelos, Vicente Guerrero, Guadalupe Victoria, Leona Vicaria and her lover Andres Quintana Roo, and other heroes of the struggle for independence.

The macabre military parade was captained by President Felipe Calderon this May 30th to usher in Bicentennial festivities that will climax in September. The bones of the heroes are being shifted from their crypts in the slender column that supports the gilded Angel of Independence installed by dictator Porfirio Diaz (1876-1910) just weeks before the Mexican revolution exploded a hundred years ago.

Under Calderon’s direction, they were being transported up to Chapultepec Castle, the colonial palace that overlooks the city, where experts will sort out whose bones are whose, and polish them up in anticipation of the big fiesta.

2010, of course, also marks the 100th anniversary of the Mexican revolution but the bones of the heroes of that landmark uprising of the poor are buried in their own monument, currently undergoing renovation. Of the duel centennials, the marking of the Mexican revolution has been downgraded by the right-wing president Calderon who reportedly is uncomfortable with the images of such revolutionaries as Emiliano Zapata, Francisco Villa, and others who once overthrew a conservative government.

But the bones of the heroes are not the only bones stirring in Mexico these days. In Taxco, the historic Guerrero state silver mining town, now a tourist Mecca, at least 77 cadavers were removed this June from the shuttered San Francisco Cuadra mineshaft, all of them casualties of Calderon’s never-ending drug war. Although most had been reduced to piles of bones, more recent victims were identified by striking tattoos of Santa Muerte, the death goddess of the narcos.

The bones retrieved from the Taxco mine are thought to have been deposited there by pistoleros in the employ of La Familia, a drug gang based in next-door Michoacan state, notorious for beheading its rivals. Some drug war observers link the death cult to the Evangelical prosperity gospel.

On June 16th, La Familia gunmen and federal police troops mixed it up outside Taxco. According to Mexican drug war officials, a total of 15 dead pistoleros were added to the mounting bone pile. Taxco’s stock as a tourist destination has declined precipitously since the killing spree began.

All over Mexico, the narco bones are piling up. 23,000 citizens have perished since Calderon declared war on the drug cartels 43 months ago to curry favor with Washington and garb himself in the mantle of military authority after a fraud-marred presidential election that left him with little credibility. To underscore the campaign, Calderon donned a military field jacket two sizes too big for his small, pudgy stature to the delight of the nation’s acid-penned political cartoonists.

In addition to the 23,000 dead, hundreds are missing in action, many buried in clandestine common graves like the Taxco silver mine. Families set out on federal and state highways and never arrive home. Some vanish at impromptu checkpoints set up by the military and police and the drug gangs.

A record number of bones were collected this May when 1060 died in the drug war, a 43% increase over May 2009. June has been even more horrific. This June 11th while Mexico’s national team inaugurated the World Cup football championship in South Africa, 85 new candidates for the bone pile were counted, a new one-day record.

Two 70-plus days followed. Ninteen addicts were slain in a Chihuahua City drug clinic, the fourth mass killing at such facilities in the state in the past year. In Ciudad Madero where 20 were slain, a clique known as “The Artists of Assassination” took credit for distributing the dead in a score of colonies in this Tamaulipas oil town. 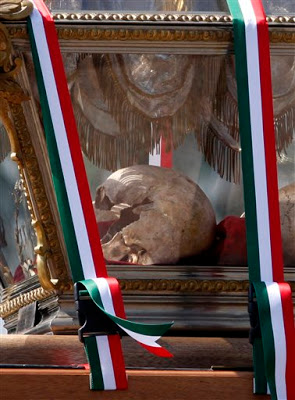 A skull — perhaps that of revolutionary legend Miguel Hidalgo — seen in a glass crypt containing the bones of a dozen national heroes in Mexico , Sunday, May 30, 2010. The remains were carried through the city in a solemn Bicentennial procession. Photo by Marco Ugarte / AP.
On June 15th, 29 members of the Zeta Cartel were massacred inside a Mazatlan Sinaloa state penitentiary by rivals from El Chapo Guzman’s Pacific Cartel armed with automatic weapons. El Chapo (“Shorty”) is reputed by U.S. National Public Radio to be Calderon’s favorite narco lord. Thirty-five prisoners had previously been slaughtered in the prison since the first of the year.

On the same day as the massacre in Mazatlan, a dozen federal troops were ambushed by La Familia near Zitacuaro Michoacan in the heart of the Monarch butterfly sanctuary zone. The ambush occurred almost a year to the date of a La Familia attack that cost 10 federal police officers their lives.

With the daily body count zooming, President Calderon has been obligated to launch a media campaign in an effort to convince a dubious public that he is winning his drug war. In mid-June, the President’s public relations team bought up double truck space in every daily newspaper and weekly magazine in the country for the publication of Calderon’s 5,000-word defense of his failing policies, shifting blame for the violence to the insatiable demand for drugs of his nearest neighbor to the north which he also lamented is arming the drug cartels via thousands of gun shops strung along the 1964 mile border.

The president also put the onus on the purportedly increasing affluence of Mexicans (presumably due to his administration’s economic initiatives) that has provided them with enough disposable income to buy drugs.

Felipe Calderon’s mobilization of the armed forces to take on the cartels has been, at best, a big bust. Sending in the troops has predictably led to massive corruption. The Mexican Army, which took over the drug war from very corruptible state and federal police, is now so untrustworthy that the Navy is being deployed in high profile operations.

Civilian security agencies are riddled with cartel infiltrators. Officials on drug gang payrolls have been uncovered in the Special Prosecutor for Organized Crime office, the Federal Police command, and even Interpol and the U.S. Homeland Security Customs & Border Enforcement. Human rights abuses have climbed to over a thousand incidents a month reported to the National Commission on Human Rights (CNDH.)

The border around Reynosa, Tamaulipas and McAllen, Texas is particularly treacherous. On June 3rd, three boys — the youngest was 13 — were gunned down by Mexican Army troops near Reynosa. The military claims they were Gulf cartel gunmen (“sicarios“). Their parents testify they were wearing their middle school uniforms when the soldiers opened fire.

Calderon’s preference for marketing the Bicentennial of Independence reflects the skittishness of his rightist PAN party to deal with class-based social upheaval. On the other side of the political ledger, the Left is focused on the possibility of renewed uprising as the nation approaches the centennial of the 1910 revolution. 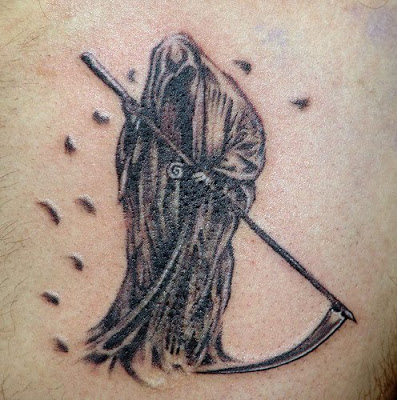 Tattoo depicting Santa Muerte, the death goddess of the narcos. Image from Marzia Tattoo / Flickr.
Class tensions, exacerbated by the spiraling economic downturn; the increasing concentration of wealth in the coffers of the oligarchy; and rampant injustice are seen as signposts towards a new Mexican revolution. But the Left may have missed the boat. Indeed, if revolution can be defined as the violent overthrow of a sitting government, the new Mexican revolution has already begun:

Amidst dibilitating narco wars and bicentennial ballyhoo, older bones are rising to the surface these days.

Deep beneath the Templo Mayor or Great Temple in Mexico City’s old quarter where the Aztec emperors butchered tens of thousands of warriors to win the blessings of Tlaloc, the god of the rain, and Huitzilopochtli, the sun at mid-day, the bones of the ancients are rattling around as never before.

In 2006, at the foot of the altar to Tlaloc on the corner of Guatemala and Argentina Streets, the National Institute of History and Anthropology (INAH) began to excavate a site beneath a popular cantina, El Seminario. Ten meters down, the diggers hit pay dirt: a monumental 12-ton slab depicting the Tlatecuhtli, the Aztec goddess of the earth, a fierce frog-like creature that had been buried for five centuries following the fall of the Mexica empire to the European invaders.

Archeologist Eduardo Matos Mocuhtezuma, on whose watch the earth goddess was uncovered, speculates that the Tlatecuhtli was installed by the Emperor Mocuhtezuma II (no relation) to cover the tomb of Ahuizotl, one of the most powerful of Mexica rulers.
Although the bones of Ahuizotl have not yet been located, the discovery of many offerings (“ofrendas“) — textiles, gold jewelry, tiny figures of Aztec deities — indicate a new find is imminent.

This May 17th, the Tlatecuhtli, which has broken into four large sections and is missing a four foot section where its viscera should be, was painstakingly carried into the Templo Mayor museum to be the centerpiece of an exhibition documenting the “Time and Destiny” of Mocuhtezuma’s governance — his fall in 1521 amidst multiple signs of doom and gloom marked the end of the Aztec empire.

As they were 500 years ago, these are apocalyptical times. The deluge of bones here is accompanied by premonitions of cataclysm: global warming, a deadly Gulf of Mexico oil spill, terrifying acts of violence and vengeance.

Laid out on an immense bier, the Tlatecuhtli is visible from three stories above the museum floor. Viewed from on high, she seems immersed in beatific repose, her heavy lids turned demurely downwards and her serrated tongue dangling comically from her open mouth. Capped by a crown of caracoles (snails) she is perched on thick claws that communicate maximum animal power.

Jesus, a breakfast companion at the Café La Blanca, studies the photo in the morning daily, La Jornada. “Wow! What do you think will happen to us if she ever wakes up?” he wonders.

[John Ross lives in Mexico City a few blocks from the Tlatecuhtli and the subject of his latest cult classic El Monstruo: Dread & Redemption In Mexico City (“gritty & pulsating” — New York Post.) He is can be fingered at johnross@igc.org.]

1 Response to John Ross : An Uprising of Bones in Mexico