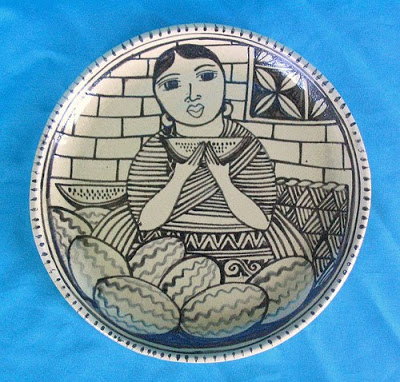 Purepecha woman in reboza, on plate from Tzintzuntzan, Michoacan. Image from Teyacapan / Flickr.
Working the parcela:
‘Feminization’ is hope for Mexican agriculture

SANTA CRUZ TANACO, Mexico — When I first settled into this tiny Purepecha Indian village high in the Meseta Tarasca of west-central Michoacan state 50 years ago, few women tilled the land. Tending the milpa (corn patch) was strictly a man’s work. The men plowed the fields and planted in the spring and the wives and daughters would help to weed (barbechar) and glean in the harvest — but it was the men who strapped on the tchundi basket as they moved up and down the rows, snapping off the big ears of maiz to be sold in the markets of neighboring cities.

While the men lorded it over the corn patch, women had dominion over the home and the children. They cared for the kids and the chickens and prepared the meals. At mid-day, they wrapped up fresh, warm tortillas in colorful servietas and carried them out to the fields to feed their husbands.

Only two women in Tanaco actually worked their own parcelas (plots.) Dona Teresa Garcia had a handful of fields scattered up and down the valley she had inherited from her murdered husband, and many sons to work them, and although she was known to get her hands dirty, she was more an overseer and administrator. Slight and sprightly, Tere delighted in a full storehouse and was proudest of her purple and red and blue pinto corn she grew from her cache of grandfather seeds.

Nana Eloisa on the other hand was a mountain of a woman who plowed the rocky valley soil at the foot of volcanic mountains and lush pine forests — when she didn’t have an ox or the wherewithal to rent one, Eloisa was known to harness up the plow and pull it herself. Nana Eloisa had no husband although men sometimes hid in her long serge skirts. Unlike Dona Teresa who preferred to negotiate off stage with the men who ruled the community, Eloisa, who was equipped with a stentorian voice, often spoke up at assemblies of the comuneros (indigenous landholders.) The neighbors talked about her in awed whispers. 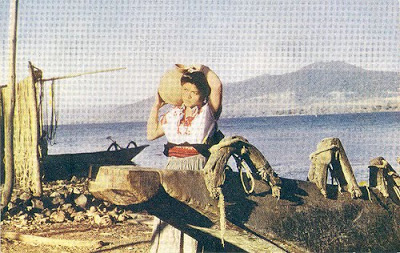 Purepecha woman carrying water, shown on postcard. Lake Patzcuaro in Michoacan is in the background. Image from Teyacapan / Flickr.
Times have changed up in the Meseta — and changed again. In the 1980s, as the first of five neo-liberal regimes took hold far away in Mexico City, the Purepechas who never strayed far from the Meseta unlike their mestizo neighbors in Tangancicuaro and Gomez Farias who first began trekking north a hundred years ago, plunged into the immigration stream with a vengeance. Fathers and sons went off to find their fortunes in El Norte and many never came back.

The women were left in charge of the house and the milpa both, a double workday (doble jornada). Their husbands would send home the remisas (money orders) with instructions on where and how much corn to plant. Any cash left over was destined to pay off loans for the coyotes who charged thousands of pesos to get the men across the border.

Often the women would hire peones and jornaleros to do the fieldwork but others worked the milpas on their own. Gradually the women began to make their own decisions about their husbands’ land. Many stepped out of the traditional long Purepecha skirts and literally and figuratively put on the pantalones.

Women outweigh men in Mexico 53,000,000 to 50,000,000 according to the 2005 half census. Although many are still tied to the home, women now comprise 40% of the workforce. In the rural sector where 28% of the population continues to subsist, the stats are even more skewed. One estimate is that 18 million women are now the primary workers on the land — but only 4.5 million actually have title to it.

Title allows them membership and voice and vote in the ejido (villages that are designated rural production units) and community, access to agricultural credits, and full agrarian rights. But women landholders are often relegated to servant stature in the ejido assemblies where only 2.5% serve as officials of the 28,000 communal farms so designated by the Secretary of Agriculture.

Although many women farmers or campesinas join mixed gender farmers organizations like the PRI party-run National Confederation of Campesinos (CNC) or the more left UNORCA and El Barzan, the dismaying disparity in their recognition as producers have motivated the women to form their own groupings such as the Ecological Campesinas of the Sierra of Petatlan Guerrero and the CONOC (National Council of Women Farmers’ Organizations).

But whether within the male-dominated farmers centrals or those of their own making, equal recognition has been slow in coming for the campesinas. Although agricultural budgets put together by the Secretary of Agriculture (SAGARPA) and the Secretary of Social Development (SEDESO) appear to allocate 42% of their resources to women, the numbers are deceiving — most of the money designated for women farmers is assistencial aid drawn down from the “Oportunidades” poverty program.

Other monies are assigned to crafts collectives such as the ceramicists of Ocumicho just over the mountain from Tanaco where the women throw the much in demand pots and the men bring the wood to keep the ovens fired up. Funds for micro-projects such as keeping chickens are available to women farmers but as Blanca Rubio writes in the left daily La Jornada, the campesinas would rather be recognized as producers of maiz than for their ancillary talents. 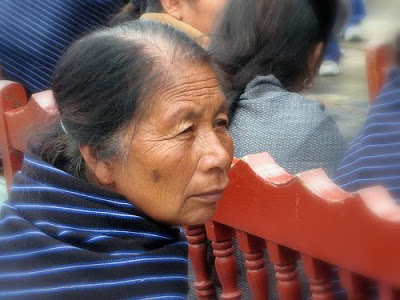 Indigenous woman from Michoacan. Image from Arantxamex / Flickr.
In addition to the gender of farming, the gender of out-migration from feeder states like Michoacan, Jalisco, Guanajuato, Zacatecas, and more indigenous Chiapas and Oaxaca, has changed radically. Once upon a time only men headed for El Norte and the potentially mortal consequences of this dangerous migration but women’s numbers in the flow north have tripled in the last decade as neoliberal agrarian policies imposed from Mexico City have devastated the campo and the bottom has fallen out of Mexican agriculture.

Under presidents Carlos Salinas and Ernesto Zedillo (1988-2000), the Constitution was mutilated to allow the privatization of communally-held land, grain distribution was handed over to transnationals like the Cargill Corporation, guaranteed prices were scrapped, and credit for poor farmers dried up. Vicente Fox and Felipe Calderon (2000-2010), presidents chosen from the right-wing PAN party, have hastened the demise of the agricultural sector.

The coffin nail was the 1994 North American Free Trade Agreement. Every year since, millions of tons of cheap U.S. and Canadian corn swamp Mexico forcing small-hold campesinos and campesinas out of business. A Carnegie Endowment investigation into the impacts of NAFTA on poor Mexican farmers published on the tenth anniversary of the trade treaty calculated that 1.8 million farmers had abandoned their milpas in NAFTA’s first decade — since each farm family represents five Mexicans, the real number of expulsees comes in close to 10,000,000, at least half of them women.

One consequence is that women now swim in the migration stream in dramatically increased numbers. Sisters follow their brothers north and wives their husbands, leaving the children at home with the grandmothers. A third of the households in Tanaco and just down the valley in Cucucho have no mother or father at home.

For those women who stay behind, lifestyles have changed. Families have abandoned or sold off their milpas and the remisas from El Norte (which decreased 20% in recession-ridden 2009) are now invested in building up the house, laying cement floors and hooking up electricity lines. Women open changaros, storefronts where they sell knicknacks and snacks to their neighbors.

Women farmers who still till their parcelas now have to work a triple workday (triple Jornada) just to make ends meet, finding jobs outside of the community as domestics or factory workers, taking care of the house and the kids and the chickens, and tending to the milpa. When the husbands do come home, the once rigidly defined roles of men and women in the Mexican countryside have been irreversibly altered. Men are not the sole breadwinners now and decisions must be taken together. Left to their own devices to survive, the campesinas have become empowered. They have feminized agriculture.

The feminization of the Mexican campo is a bright light in a dismal prospectus thinks the much-respected agrarian analyst Armando Bartra. Gender articulates how farmers approach the land, Bartra writes. Men wrest the crops from the soil. They plant to achieve bigger and better harvests and resort to chemical fertilizers and pesticides and genetically modified seed to speed up the bounty. They pin their hopes on the market, Bartra underscores, “and the market has no future” for small farmers.

By way of contrast, women are more in sync with the land. They don’t till the soil for profit as much as to keep their families well nourished. They are commited to auto-sufficiency first and do not poison the land upon which they grow their family’s food with chemicals. The feminization of farming, Bartra concludes, is “the only salvation for Mexican agriculture.”

[John Ross has returned to El Monstruo (Mexico City), the title of his most recent volume (El Monstruo: Dread and Redemption in Mexico City) and the most contaminated, crime-ridden, corrupt, and conflictive megalopolis in the Americas.]