Johnny Hazard :
In Mexico, massacres are the order of the day

While the U.S. government lauds its Mexican counterpart, a new mass grave appears to contain bodies of ‘disappeared’ education students. 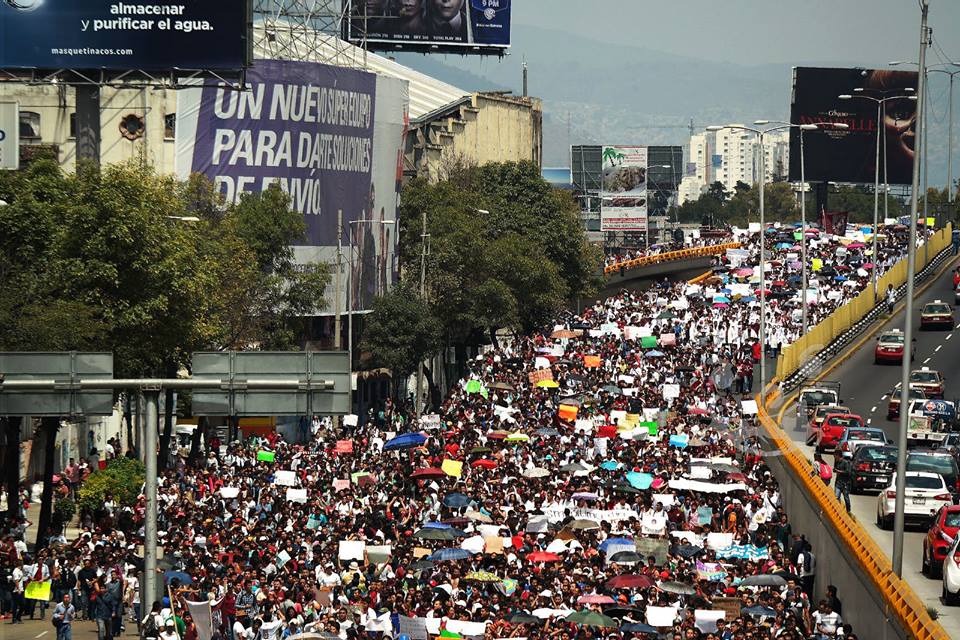 Students of the Instituto Politécnico Nacional are shown marching on Friday, September 30. 2014. They took over part of this highway, known as Circuito Interior, en route to various government buildings. Photo by Luis Ramírez Tamayo.

MEXICO CITY — By now many in the U.S. and most in Mexico have seen the evidence of what we feared: Mass graves were discovered Saturday that appear to contain the bodies of almost half of the about 50 education students murdered or “disappeared” since September 26 in Iguala, Guerrero.

Most were students of a “rural normal,” a teacher preparation school in Tixtla, Guerrero, in southwest Mexico. (Acapulco, Zihuatanejo, and Ixtapa are famous places in Guerrero, but the state as a whole is one of the poorest places in Latin America and was home to two major guerrilla movements in the 1970s.)

Evidence strongly suggests the participation of the mayor and police in the massacre.

Evidence strongly suggests the participation of the mayor and police in the massacre. The mayor, Juan Carlos Abarca Velázquez, was elected as an “external candidate” of the Partido de la Revolución Democrática, which was founded as a social democratic and populist party by Cuauhtémoc Cárdenas, Andrés Manuel López Obrador, and others in 1988 and now appears to have been corrupted to this extreme.

The current governor of Guerrero (Ángel Aguirre, who looked for the PRD when his party, the dominant PRI, wouldn’t nominate him) and mayor of Mexico City (restaurant chain owner and former police chief Miguel Ángel Mancera) are also right-wing non-members of the PRD who were elected vía the party (though they may not be complicit in these murderers).

The mayor of Iguala asked for a 30-day leave, ostensibly to get out of the way of the investigation or to prepare his defense. Most city council members lauded him and gave him a lavish farewell. Many in the state and national PRD seek to scapegoat him; others, including the newly elected president of the party, Carlos Navarrete, go as far as to defend him.

The students’ enemies are government promoters of education ‘reform,’ not
dope dealers.

There’s a lot of talk about the mayor’s ties to drug gangs and investigators lean toward theories of gang control of the police force and their having ordered the kidnapping and execution of the students. This makes no sense; the students’ enemies are government promoters of education “reform,” not dope dealers.

Other commentators maintain that the state government had already taken some control over the city police and thus may have had direct participation in the atrocities committed. The police chief — it is not clear whether he has been replaced — is a nephew of Felix Salgado, an eccentric PRD politician and former mayor of Acapulco.

While students of the normal in Ayotzinapa, near Tixtla, do often engage in very militant protests, they were in Iguala to attend a football (soccer) tournament and raise money there for various projects, including their transportation to the annual October 2 march in Mexico City that commemorates another massacre, that of hundreds of students and bystanders in 1968.

Starting during the night of Friday, September 26, and extending into the next morning, they and others — one of the shooting victims was an underage soccer player from Chilpancingo — were pursued, shot at, and loaded into police vehicles. Six died immediately; clandestine graves that appear to contain the shot and burned bodies of many of the 43 missing people began to be discovered a week later. Authorities claim that confirmation of identities could take up to two months. Families of the disappeared have arranged for Argentine forensics experts to participate.

The federal government seeks to portray itself as the agency that will solve this.

The federal government, now in the hands of the Partido Revolucionario Institucional (PRI), the traditional ruling party, seeks to portray itself as the agency that will solve this. This helps President Enrique Peña Nieto and his PRI to cover up their role in a similar massacre of 22 people in the village of Tlatlaya in the most populous state, Estado de México, which occurred in June but details of which are only recently coming to light. 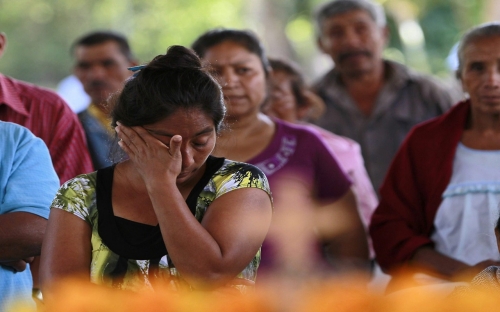 The parents of missing Mexican students pray at a school in Ayotzinapa in the Mexican state of Guerrero on Tuesday. Photo by Jorge Dan Lopez / Reuters.

The mother of one of the victims, a 15-year-old girl, has gone public with the story, confirmed by survivors, of how all of the people had surrendered and were then summarily executed. Her daughter, having already been shot at least once, had fallen to the ground where she was then shot in the back.

The direct perpetrators — the army and the state and local governments — continue to claim the deaths were the result of a firefight initiated by the (unarmed) victims. The governor of Estado de México, Eruviel Ávila, said just that in an interview in the newspaper La Jornada published on October 6. Ávila is the handpicked successor to former governor and now president Peña Nieto.

Some media are bubbling over how the PRD massacre is now practically solved because federal troops — the perpetrators of the PRI massacre in Tlatlaya and of countless other atrocities — have come to the rescue, taking control of the local police force in Iguala.

I tell these stories not so people can sit smugly and talk about “those barbarious Mexicans,” but, to the contrary, so we can reflect on how convenient it is for dominant U.S. interests to have this brutal mechanism of repression of dissent operating south of the border. While Jerry Brown jokes about how the Chamber of Commerce paid for his recent junket to Mexico to see how to profit from the privatization of Mexico’s natural resources (whose exploitation will include fracking in arid zones already hard hit by water shortages), while Obama also lauds pretty boy president Peña Nieto’s “reforms,” and while Newsweek puts him on the cover, Mexicans die and die. And not of natural causes.

On a more optimistic note, students at the Instituto Politécnico Nacional (IPN or “el Poli”), founded in the 1930s to operate Mexico’s newly-nationalized oil industry, have waged a strangely and surprisingly successful strike in recent weeks. On September 26 — the same day as the massacre in Iguala — about 70,000 IPN students marched in Mexico City and ended up outside the offices of the secretary of Gobernación, the most powerful cabinet post. What usually happens in such cases is that an undersecretary comes out and offers to meet with a few representatives. (There’s a phalanx of police stationed outside all the time and a set of materials to set up barriers; the street is usually closed.)

The students demanded a public dialogue on the street with the secretary, not with any underling, and they got it. Their 10-point program included the dismissal of the rector of the school, the non-implementation of various restructuring programs, and the departure of the local police from campus patrol and vigilance activities.

The rector has resigned and the secretary, Miguel Angel Osorio Chong, seen briefly as a hero by some for having met with the students, ceded some of the other points, but the students are evaluating their response in a series of assemblies and seem intent on showing that they can’t be swayed with opportunistic promises. Osorio Chong obviously sought to be seen as liberal with the IPN students to deflect attention from his government’s role in repressive acts like the extra-judicial executions in Tlatlaya.

In a future article, I hope to explore further how Peña Nieto got to be president and what this means in terms of economic, energy, military, and gender issues.

1 Response to Johnny Hazard :
In Mexico, massacres are the order of the day